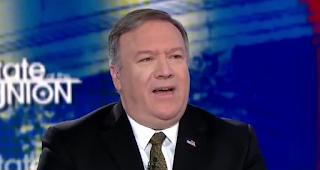 As noted before on this blog, the only group that has consistently seen its agenda pushed by the Trump/Pence regime are the the Christofascists.  Trump/Pence has been relentless in its effort to roll back LGBT and women's rights to the delight of those who want a Christian theocracy and the to inflict their toxic form of Christianity on all Americans. The latest move is the establishment of a panel on international human rights and “natural law,” that seems aimed at narrowing protections for women and members of the LGBT community.  Christofascists and far right Catholics have long used "natural law" to argue against LGBT rights and to push for patriarchal control of families and the subjugation of women - the Catholic Church's "natural law" has not evolved since the 12th century - so it is doubtful the panel will be embracing modern knowledge and concepts of equality.  Politico looks at this disturbing development:

The new body, to be called the Commission on Unalienable Rights, will advise Secretary of State Mike Pompeo, according to a notice the State Department quietly published Thursday on the Federal Register.

“The Commission will provide fresh thinking about human rights discourse where such discourse has departed from our nation's founding principles of natural law and natural rights,” states the notice, which is dated May 22.

Several human rights activists said Thursday that they were surprised by the move and trying to learn details. Some privately said they worry that talk of the “nation’s founding principles” and “natural law” are coded signals of plans to focus less on protecting women and LGBT people.

The word “natural” in such context is often interpreted to mean “God-given,” a phrasing that is less common in modern human rights literature but which could signal a religious component, experts said.

Activists and former U.S. officials noted that the Trump administration’s record on human rights so far is spotty at best.

The State Department already has an entire bureau devoted to the issues of human rights, democracy and labor, and it was not clear whether officials in that bureau were involved or even aware of the plans for the new commission.

The top State Department contact listed on the notice was Kiron Skinner, Pompeo's director of policy planning. . . . . Skinner drew criticism recently for seeming to suggest that China, a rising power, is such a fundamentally different culture from the United States that arguments about human rights may not have much effect in dialogue with Beijing.

“On the one hand it’s commendable that the secretary wants to place more emphasis on these issues, given that the administration to date has not been very outspoken on them,” said David Kramer, who served as the assistant secretary of State for human rights under the administration of Republican President George W. Bush. “On the other hand, I’m not sure what this commission is supposed to do that the human rights bureau doesn’t already do.”

Generally speaking, President Donald Trump and his aides have de-emphasized the role of human rights in their foreign policy, raising the issue only selectively — typically to raise pressure on countries considered adversaries.

The Republican administration has, for instance, highlighted the plight of female activists seeking more freedom in Iran, a longtime U.S. nemesis, but largely ignored similar challenges facing such activists in Saudi Arabia, a longtime U.S. ally.

The administration has made promoting religious freedom overseas a high priority, a move that has delighted Trump’s many evangelical Christian supporters.

But the administration also has rolled back domestic regulations aimed at protecting members of the LGBT community, especially those who are transgender.

It also has cut down sections about women’s reproductive rights in the State Department’s annual human rights report and made attempts to eliminate references to “sexual and reproductive health” in U.N. documents.

It is not clear who will serve on the panel or when their appointments will take effect, but activists and former U.S. officials noted that its composition will greatly affect the policies it promotes.

If some of the who's who of Christofascists who have Trump's ear end up on this panel, it will be a sign that the panel will have a sinister agenda. As for Skinner, she is a former Fox News contributor, which does little to instill any shred of confidence.