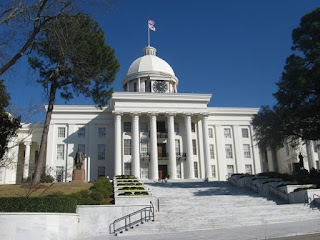 The political insanity in Alabama continues GOP lunatics who control both houses of the state legislature want to eliminate marriage licenses so that homophobic probate court judges will have no need to issue licenses to same sex couples.  The idiocy is part of the Christofascists' agenda of undermining same sex marriage granted in the Obergefell ruling in 2015.  One can only hope that if the bill is signed into law - a likely event given the idiot who holds the governorship at present - Alabamians will encounter problems when they venture outside of their knuckle dragging state.  Imagine Mobilians having to travel to Pensacola, Florida to make sure they have marriages that will be fully recognized out of state.  Having lived in Alabama years ago, I cannot help but wonder at times how insanity has metastasized in Alabama - but then I realize the cause: the rise of the Christofascists in the Republican Party.  A piece in Huffington Post looks at this latest batshit craziness in Alabama:

On Friday, the Alabama legislature sent a Republican-backed measure to the desk of Gov. Kay Ivey (R) that would aid officials who oppose same-sex marriage.

Under existing state law, couples are required to obtain a marriage license from a probate judge and hold a ceremony to “solemnize” the union. If Ivey signs the measure introduced by state Sen. Greg Albritton (R), the solemnization requirement would be eliminated and it would become the responsibility of couples themselves to record their own union.

Probate judges would simply be required to pass those records along to a state office and could not reject any marriage for which all paperwork is in order. That means judges who personally oppose same-sex marriages would be able to distance themselves from such unions.

In Alabama, some probate judges stopped issuing marriage licenses altogether after the Supreme Court’s 2015 marriage equality ruling because the judges did not want to be forced to issue licenses to same-sex couples. That has meant that some Alabama couples are required to travel to other counties to obtain a license.

But even as the measure would functionally eliminate barriers to marriage equality, Albritton referenced religious objections to same-sex unions in discussing his bill.  Under it, “a minister who has an objection to a particular marriage ceremony, they don’t have to do it,” he said.

“I think it’s far less about good governance and more about protecting folks that don’t want to do their jobs.”  The bill was propelled through the state House and Senate largely with Republican support, although some Democrats voted for it.

Note that I lined through "conservative" at the outset of the article quote.  It is far past time that these politicians be called out for what they truly are: religious extremists - or the political whores of religious extremists.  There is nothing conservative about being a religious fanatic.
Posted by Michael-in-Norfolk at Sunday, May 26, 2019

I understand that marriage licenses in Alabama cost between $74 and $104, and I suppose that much of the fee goes to support the county government. So by getting rid of marriage licenses, these jerks are cutting their own incomes?