Buttigieg: Trump’s "Bone Spurs" and Potential Pardons Are An Insult to America 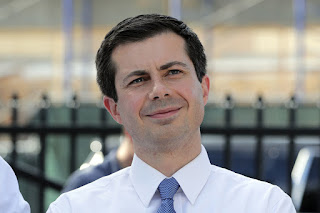 Today is Memorial Day when we honor those who died in America's wars and to a lesser extent those who served in the military.  My father and his brothers all served in the military in World War II. My mother's parents both served in World War I and one of her sisters served in World War II.  One of my sons-in-laws volunteered and did three tours in Afghanistan before being seriously wounded. (By the time I came of age in the Vietnam era, the draft had become a lottery and with a lottery number of 269, I was never called up).

In contrast to my own family and millions of others, neither Donald Trump nor his father, Fred Trump, served in the military.  During World War II, the senior Trump built military housing, including in Newport News and Norfolk, Virginia (Trump, Sr. and others were later investigated by a U.S. Senate Banking committee for windfall gains in dealings with the Federal Housing Administration).  Trump, Jr. dogged the draft by claiming he had bone spurs - although the supposed affliction had no adverse impact on his playing tennis and other sports.

Today, we will likely hear utterly disingenuous statements by the liar-in-chief talking about those who sacrificed all for their country even as the Trumps never sacrificed anything. Democrat presidential candidate finds the concept as disgusting as I do and has called Trump out for his false military deferment. Worse yet, Trump wants to pardon some who have been convicted of war crimes, including murdering civilians.  A piece in Politico looks at Buttigieg's justified condemnation of Trump.  Here are excerpts:

Calling it “an assault on the honor of this country,” Democratic presidential candidate Pete Buttigieg on Sunday said “there is no question” that Donald Trump faked an injury to avoid serving in the Vietnam War.

“There is no question, I think, to any reasonable observer that the president found a way to falsify a disabled status, taking advantage of his privileged status in order to avoid serving,” the mayor of South Bend, Ind., told ABC’s Martha Raddatz on “This Week with George Stephanopoulos.”

“You have somebody who thinks it's all right to let somebody go in his place into a deadly war and is willing to pretend to be disabled in order to do it,” he said. “That is an assault on the honor of this country.”

Buttigieg, who served as a Navy intelligence officer in Afghanistan, first accused Trump of using his “privileged status to fake a disability” on Thursday in an hourlong interview with The Washington Post.

Trump was exempted from military service five times at the height of the Vietnam War. He received four draft deferments for his time in college and one medical deferment for having bone spurs. In testimony before Congress, former Trump attorney Michael Cohen said of the medical deferment: “Mr. Trump claimed it was because of a bone spur, but when I asked for medical records, he gave me none.“
Buttigieg also criticized the Trump administration's decision to deploy more than 1,500 military personnel in an effort to deter Iran. He told Raddatz "escalation is the last thing we need in the Middle East right now."

Referring to his own military experience, Buttigieg slammed Trump’s consideration of granting pardons to some service members who have either been accused or convicted of war crimes. One of those who has been considered for a pardon is former Navy SEAL Eddie Gallagher, who stands accused of murdering an ISIS prisoner and indiscriminately shooting at civilians.

"The idea that being sent to war turns you into a murderer is exactly the kind of thing that those of us who have served have been trying to beat back for more than a generation," Buttigieg said.

"For a president, especially a president who never served, to say he's going to come in and overrule that system of military justice undermines the very foundations, legal and moral, of this country," he said.