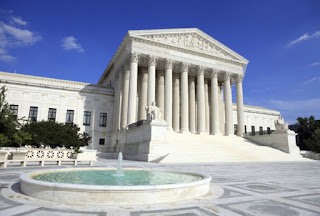 Yesterday, anti-transgender Christofascists lost a round at the U.S. Supreme Court when the Court refused to hear a challenge from students - no doubt pushed by their parents - who claimed that a school system's bathroom policy allowing transgender students to use restrooms appropriate for the gender identity violated the privacy rights of the anti-trans students.  The rejected challenge is part of a larger Christofascist effort - which is being aided by the Trump/Pence regime - to reverse rights that transgender (and gays) have achieved under the Obama administration. A piece in Bloomberg Law looks at the Court's action.  Here are excerpts:

The U.S. Supreme Court won’t take up the controversy over bathroom use by transgender students. The justices turned away a challenge by four students from Boyertown Area High School in Pennsylvania who claim a school policy of allowing LGBT students to use their preferred bathroom violates their right to privacy.

Controversies have erupted nationwide as school districts decide whether to let LGBT students use bathrooms corresponding to their gender identity rather than their gender at birth.

Some challengers say it’s a violation of federal anti-discrimination laws not to accommodate LGBT students.  The Supreme Court was preparing to hear a similar case at the end of the Obama administration when a policy change by the Trump administration undid much of the lawsuit. The justices nixed the case.

Sadly, the Christofascists continue to believe that their rights override everyone elses and Trump is only too happy to play to this self-centered crowd.
Posted by Michael-in-Norfolk at Wednesday, May 29, 2019