More Disgusting Racism from the GOP 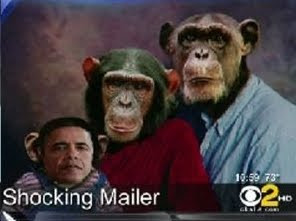 I have noted many times that in addition to the Christianist undercurrent that plagues the Tea Party Crowd, there is a very clear element of racism: Anti-black, anti-Hispanic, anti-anyone who isn't white. Now a GOP/Tea Party official in California has revealed just how low these folks will go and how in their minds anyone who isn't straight and Caucasian is indeed not quite human. Exhibit A: the above photo being e-mailed around by Marilyn Davenport, a Southern California Tea Party activist and member of the central committee of the Orange County Republican Party. The photo bears the caption "No wonder there's no birth certificate." When the e-mail was discovered by the Orange County Weekly, Ms. Davenport - like all confirmed racists - claimed she isn't a racist. Obviously, she has forgotten the maxim that actions speak louder than words. People like Ms. Davenport continue to turn the GOP into something vile. I can only wonder what Ms. Davenport thinks of LGBT Americans. Here are some highlights from the OC Weekly:
*
This afternoon, Marilyn Davenport sent an email to fellow Orange County Republican elected officials, apologizing if anyone was offended by her depicting President Barack Obama as an ape--while also blasting the "liberal media" for reporting the story.
*
"I simply found it amusing regarding the character of Obama and all the questions surrounding his origin of birth," Davenport wrote. "In no way did I even consider the fact he's half black when I sent out the email. In fact, the thought never entered my mind
*
Tim Whitacre, a longtime conservative Orange County Republican activist in Santa Ana, defended Davenport: "Marilyn Davenport is a staunch, ethical Republican lady. There is nothing unethical about this from a party standpoint because it wasn't sent out to the party at large with any racist statements and it wasn't signed as a central committee member. As a private individual, she is just real big on Birther stuff. One of her passions that drives her is the president's lack of forthrightness about where he was born. Marilyn believes that nobody knows where he was born and so this picture says a thousand words." . . . . She is known as a pleasant, loving person, and it kills me that she is being attacked by this non-story knowing her mindset."
*
Indeed, the photo says a great deal about today's GOP and none of it good. Does the "loving" Ms. Davenport also support stoning gays and the murder of abortion providers too?
Posted by Michael-in-Norfolk at Sunday, April 17, 2011

"In no way did I even consider the fact he's half black when I sent out the email. In fact, the thought never entered my mind" . . .

In other words, I'm guessing, she totally forgot he's not 100% black.