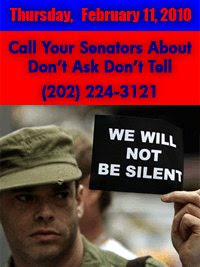 As readers know, I am a strong supporter of DADT because I see the injustice it works on honorable and patriotic LGBT citizens who seek to serve their country. As I see it, the existence of DADT has nothing to do with military readiness and everything to do with religious based anti-gay discrimination. If anyone needs to be discharged from the military, it is the homophobes who by their very prejudice fail to support the U.S. Constitution. On Thursday, February 11, 2010, the Senate Armed Services Committee will meet again to hear testimony on repealing Don't Ask Don't Tell. It is vital that citizens flood the Senate with phone calls demanding the law be repealed NOW! Rest assured the enemies of equality will be doing their best to lobby senators to continue discrimination. Please call your senators or e-mail them via the link below.
*
Capitol Hill Switchboard: (202) 224-3121
Senate Contact List: http://www.senate.gov/general/contact_information/senators_cfm.cfm
*
All of us need to act if we are to ensure that anti-gay policies are not made by the likes of James Dobson, Tony Perkins, Elaine Donnelly, and other haters like them. They care nothing about military readiness - they simply seek to keep LGBT Americans second class citizens because we do not subscribe to their narrow minded religious beliefs.
Posted by Michael-in-Norfolk at Friday, February 05, 2010