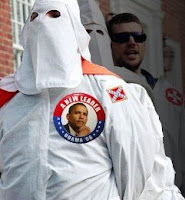 It is sad state of affairs but not a surprise that racist white extremists are lashing out and claiming increased interest in their organizations in the wake of Barack Obama's election as the first black president (albeit it he's only half black at that). However, no one seems to be adequately connecting the dots to the larger agenda of these people. Not only are they anti-black, but also anti-immigrant, anti-gay, and anti-Jewish. Moreover, I suspect that many of these extremists in California in addition to voting for the McCain/Palin ticket probably also voted for Proposition 8.
*
In my personal opinion, the racists and homophobes are not all that different: (1) both groups need to feel superior to others in order to feel good about themselves and (2) they are equally hateful towards those who are different whether the difference is racial, national origin, or sexual orientation. Hopefully, more parallels will be drawn between the similar mindset that exists among racists and homophobes. Just as racists are condemn by the larger public, so too should homophobes. The religious belief excuse doesn't cut it. Here are some highlights from a Los Angeles Times story that looks at the doings of white extremists:
*
Reporting from Bogalusa, La. -- Barely three weeks since America elected its first black president, noose hangings, racist graffiti and death threats have struck dozens of towns across the country. More than 200 such incidents -- including cross burnings, assassination betting pools and effigies of President-elect Barack Obama -- have been reported, according to law enforcement authorities and the Southern Poverty Law Center, which monitors hate groups.
*
Racist websites have been boasting that their servers have been crashing because of an exponential increase in traffic. And America's most potent symbol of racial hatred, the Ku Klux Klan, is reasserting itself in a spate of recent violence, after decades of disorganization and obscurity.
*
"We've seen everything from cross burnings on lawns of interracial couples to effigies of Obama hanging from nooses to unpleasant exchanges in schoolyards," said Mark Potok, director of the Intelligence Project at the Southern Poverty Law Center, based in Montgomery, Ala. "I think we're in a worrying situation right now, a perfect storm of conditions coming together that could easily favor the continued growth of these groups.
*
"Experts attribute the racist activity to factors including the rapidly worsening economic crisis; trends indicating that within a generation whites will not comprise a U.S. majority; and the impending arrival of a black family in the White House.
Posted by Michael-in-Norfolk at Monday, November 24, 2008

If they think their cause is so just, then why do they cover they faces?