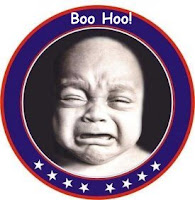 We continue to hear the whining of the cry babies who gave money to support the passage of Proposition 8 and who now do not like the fact that their actions are bringing them adverse consequences. Their whining is based on the disingenuous excuse that they were only acting on their "privately held religious beliefs" which they claim gives them a free pass apparently to engage in any and all kinds of bigotry and discrimination. I guess using that pathetic excuse, one can hate blacks, Jews, and anyone else one desires, work for discriminatory laws and it's supposed to be just fine. The excuse is, of course, bullshit and fortunately the bigots are getting called on it. Dan Savage has a good column that dismantles this disingenuousness. Here are some highlights:
*
When you donate $1500 to a political campaign to strip other people—people who are not your co-religionists—of their civil rights. Richard Raddon is, or was, the director of the Los Angeles Film Festival. . . . Raddon released a statement that said, in part, "I have always held the belief that all people, no matter race, religion or sexual orientation, are entitled to equal rights." Except for when they're not—and Raddon also believes that the religious should wield a veto over other peoples' civil rights. He goes on to whine about being a "devout and faithful Mormon," and about how his contribution to "Yes on 8" was a "private matter."
*
Uh... no. A donation to a political campaign is a public matter; and civil marriage rights for same-sex couples did not infringe upon the religious freedom of Mormons, devout or otherwise. . . . Raddon lost his job due to criticism of his public political actions, not his private religious beliefs, and his public political actions were a part of the public record. If Raddon wanted to go to church and pray his little heart out against same-sex marriage, or proselytize on street corners against gay marriage, or counsel gay men to leave their husbands and marry nice Mormon girls instead, that could be viewed as an expression of his "privately held religious beliefs."
*
In the wake of Prop 8 millions of gays and lesbians all over the country have decided that we're no longer going to play by the old rules. We're not going to let people kick our teeth down our throats and then run and hide behind "Nothing personal—just my private religious beliefs!" That game's over.
*
The bottom line is that a bigot is a bigot no matter what the excuse is that they attempt to use for their bigotry. They need to be called out and have their discriminatory actions have consequences. End of story.
Posted by Michael-in-Norfolk at Friday, November 28, 2008

I think the rest of the country is starting to wake up to that fact as well.