And Who's the Elitist??

Vanity Fair has a brief column that shows the ridiculousness of John McShame trying to paint Obama as an elitist. Obviously, he and his campaign think all voters are morons. Here is what Vanity Fair reports:
*
One of the persistent memes in the Republican line of attack against Barack Obama is the notion that he is an elitist, whereas the G.O.P. represent real working Americans like Levi “F-in’ Redneck” Johnston. It caught our attention, then, when First Lady Laura Bush and would-be First Lady Cindy McCain took the stage Tuesday night wearing some rather fancy designer clothes. So we asked our fashion department to price out their outfits. 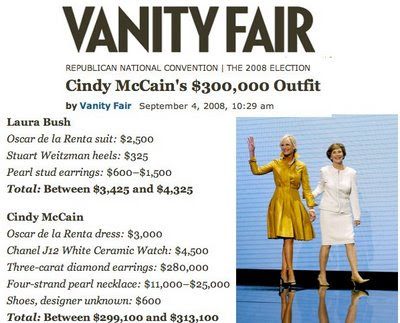 Posted by Michael-in-Norfolk at Thursday, September 04, 2008