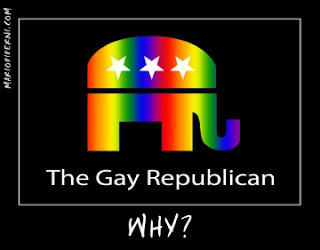 Years ago and before I "came out" I was a Republican.  Indeed, I was a city committee member for the GOP in Virginia Beach and even filed the articles of incorporation for the organization (Virginia State Corporation Commission documents continue to reflect my signature). In some ways, that was a lifetime ago and the Republican Party of today bears almost no resemblance to what the party once was.  Now, if one isn't a white supremacist, right wing Christian extremist, or consumed by greed and a thirst for lower taxes, the GOP has little to offer and personally, I cannot help but question the morality of those who cling to the party.  And then there are the so-called Log Cabin Republicans.  LGBT individuals who not only support the ugly GOP agenda but as a group have endorsed Donald Trump even as the Trump/Pence regime wages war on the LGBT community and argues that anti-LGBT discrimination should be perfectly legal. These individuals are no better than some upper class Jews who supported Hitler's rise - things ultimately turned out very badly for them.  A history lesson Log Cabin Republicans refuse to learn.  A column in The Advocate takes Log Cabin Republicans to task and reaches what is seemingly the only logical conclusion: these folks are morally bankrupt racists.   Here are column excerpts:

[B]eing an LGBTQ person doesn’t mean you have to believe a certain ideology, whether it involves economics, politics, or philosophy. The diversity of experience and values we have demonstrates that the one thing that unites us as a community is our shared experiences of being an LGBTQ person, of challenging centuries of ingrained norms about gender and sexuality. The discrimination, oppression, and the general struggles of our lives unite us, but how we go about coping and overcoming them differs in so many ways.

How LGBTQ people can vote and support Donald Trump and his party is just — I mean I know how, I just hate saying it about other LGBTQ people; but I guess if they’re willing to sell us out, what sense of loyalty should I have toward them? They’re bigots and privileged trash. Log Cabin Republicans will sell the entire community out for a gentrified loft, an expense account, and a white neighborhood excluding the hired help.

We white LGBTQ folks don’t talk about it much because it makes us incredibly uncomfortable, and honestly a lot of the minority LGBTQ folks don’t get a lot of space in our media space to discuss it, but there really is a huge problem of racism in our community. Whether it’s nightclub owners refusing to admit black patrons because they dress "thuggish," our culture of preferring white standards of beauty, or not hooking up with people of certain races because it's just a "preference," the discrimination is ubiquitous.

The Log Cabin Republicans, by endorsing Trump, show us who they are. The Muslim bans, the Nazi apologia, the concentration camps and racial purging — how can anyone who isn’t a bigot endorse that? . . . when the Log Cabin Republicans endorse and therefore give tacit support to a man who has outright apologized and excused white supremacists, you can only come to one rational conclusion.

I guess you could come to another conclusion: that they’re only concerned about their own individual affluence and access to privilege, and to hell with the rest of us.

[W]ith Log Cabin Republicans, there is the overwhelming sense that it is about their own personal power that they believe will shield them from bigotry and oppression. Well, I can tell you this right now, the Republicans will still oppress you and take your money. I know folks are fatigued and tired of comparing things to Nazi Germany, but one thing folks don’t know about, and really deserves its own unique analysis, is that there were pro-Nazi Jews. They were called the League of National German Jews; upper and upper-middle class assimilationist, nationalist conservatives who claimed ties to German conservative movements and parties (who refused to associate with them). They excused and defended the Nazis because Hitler was just "stirring up the masses." Well, none of that stopped the Nazis from declaring their organization illegal and throwing their leader, Max Naumann, into a concentration camp.The Log Cabin Republicans are much the same. They say they are fighting for LGBTQ rights, but often conservative LGB folks will throw transgender people under the bus, they will decry LGBTQ activism and culture, especially of the more leftist variety, and associate only with the parts of the community that benefit themselves. To hell with the rest of us, especially if you don’t tend toward the lighter-skinned or financially endowed persuasion.All LGBTQ rights and cultural advances have come despite the Republican Party fighting tooth and nail the whole way. The Log Cabin Republicans have accomplished nothing — they'll take credit for chipping away at "don't ask, don't tell," but it was Republican homophobia and resistance to LGB military integration that made the very flawed compromise necessary.

Let's give them some due, because Log Cabin has done something — they've become tokens for a racist, corporate, and evangelical establishment that would put us in reparative therapy camps if they could. Maybe it’s time we start using "Log Cabin" or something similar for the LGBTQ version of "Uncle Tom."

I disagree with the idea that they are all just out for money. There are a bunch of Southern rednecks whose party affiliation is tribal. Their family is Rethug, and so therefore so are they. That is not to say it excuses them of responsibility, merely that they are another branch of the right wing. There are also the purebred racist gays who are also White supremacist types who could never vote Democratic. The story is a bit more complex than merely the greedy are the gay Rethugs.