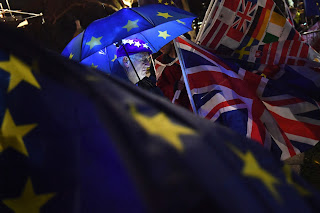 The parallels between Trump supporters and Brexit supporters continues and now a leaked government memo indicates that economic chaos, including medicine and food shortages are likely if the UK crashes out of the European Union. Despite such potential dire consequences, pro-Brexit supporters motivated by anti-immigrant - read non-white - animus and delusions of restoring a lost empire continue to push for economic suicide.  The parallels with Mid-West American farmers who continue to support Donald Trump despite his policies that are driving many farms towards bankruptcy are stark. Like their British counterparts who long for the days of rue Britannia, these Americans are driven by racism and a delusional dream of a return to a society of the 1950's when blacks, other non-whites, women and gays "knew their place" and  remained invisible and downtrodden.  Highlights from the Washington Post look at Britain's potential self-inflicted harm:


An increasingly likely “no-deal” Brexit could wreak havoc on Britain’s economy, infrastructure and social fabric, the government says in classified documents leaked to a British newspaper.

The costs of food and social care would rise, while medicines could be delayed, the Sunday Times reported. Border delays would interrupt fuel supplies. Ports would suffer severe disruptions and recover only partially after three months, leaving traffic at 50 to 70 percent of the current flow.

Those are some of the effects predicted by “Operation Yellowhammer,” which the newspaper said was compiled this month by Britain’s Cabinet Office and available to those with “need to know” security clearances.

Brexit critics have warned that crashing out of the European Union without an agreement with the rest of the bloc will damage the British economy, devalue its currency and create instability. British leaders have sought unsuccessfully since the 2016 Brexit vote to pass a “divorce” plan.

New Prime Minister Boris Johnson, a leading Brexit supporter, has promised to get his country out of the E.U., deal or no deal, during his first 100 days in office. He’s set to meet with German Chancellor Angela Merkel and French President Emmanuel Macron this week to press his case for a new deal. At the moment, negotiations are at a standstill.
Opposition lawmakers have been discussing ways of blocking a no-deal Brexit, including bringing down the government by calling a no-confidence vote in early September.  It’s unclear whether Johnson would win such a vote.

The Sunday Times said the government predicts a need to restore a “hard border” of limited, controlled crossing points in Ireland, which could cause protests.

House Speaker Nancy Pelosi (D-Calif.) has said there would be “no chance” of Congress approving a U.S.-U.K. trade deal after Brexit if it undermined the Good Friday agreement, the 20-year-old deal between Britain and Ireland that helped advance peace in Northern Ireland.

The government warns that some businesses would halt trade to avoid tariffs, while others who keep trading would pass higher costs on to customers. Agriculture “will be the hardest hit, given its reliance on highly integrated cross-border supply chains” and high trade barriers. And the black market could grow, it says, especially in border communities.

Other possible ramifications detailed in the memo: