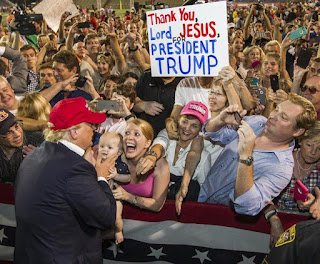 This blog frequently looks at the blatant hypocrisy of far right Christians and evangelicals in particular for a simple reason: the hypocrisy is so wide spread and seemingly never ending.  If one wants to find an argument for why one would NOT want to be Christian, evangelicals are the number one example.  Their support of the GOP and its policies they support are the antithesis to Christ's gospel message.  Add in their hypocrisy surround sex and marriage - they whine about abstinence and the sanctity of marriage yet have the highest unwed pregnancy rates and the highest divorce rates - and they are a prime example of what one should never want to be.  But perhaps the greatest demonstration of their hypocrisy - and I would add moral bankruptcy - is their support of Donald Trump.  Thankfully nearly 40% of those under 30 have gotten the message and walked away from organized religion. But it is still useful to shine the spotlight on these folks in the hope that even more will flee a version faith that is nothing less than toxic.  A recent piece looks at how these falsely pious folks care nothing about Trump's racism or the human rights abuses of his regime yet are simply appalled and upset that Trump has used the words "goddamn" twice of late. Abusing children, separating families, and fanning racial hate and bigotry are all fine, but use of the above term causes these folks to hyperventilate and go into swoons. The Pharisees of the New Testament look like upstanding folks in comparison.  Here are article highlights:

While much of the political conversation this week has centered around Donald Trump‘s open bigotry and racism against four Democratic congresswomen of color, it was something else he said that got the attention of a lot of conservative Christians.

In one instance, he recalled a business person he knew who usually hated him. But Trump allegedly told the guy, “You are going to support me because you are a rich guy, and if you don’t support me, you are going to be so Goddamn poor.”

For some people, that was the bridge too far.

Imagine how deluded you have to be to think Trump is “better than that.” He’s not. This is who he is. He doesn’t get any better.

Hardesty said nothing about the “Send them back” chants.

It wasn’t just him. Plenty of Christians on Twitter pointed out how offended they were by the cursing… but not, apparently, by the idea that Trump’s critics should go back to where they came from… even though they are American citizens and patriots through and through.

It brings to mind the old sermon illustration from preacher Tony Campolo:

These evangelicals are very clear about their priorities. They don’t give a damn about kids in cages, racist attacks against congresswomen, incompetence and scandal at all levels of this administration, or the constant stream of lies from the White House.

But taking the Lord’s name in vain? MY GOODNESS! THINK OF THE KIDS!