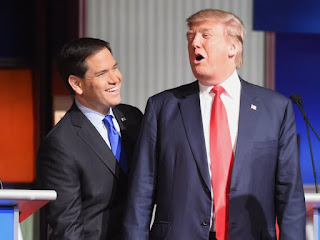 This blog often looks at the moral bankruptcy of today's Republican Party and various Republicans who have put even basic decency aside in their quest for raw power or due to fear of the ever more ugly base of the party.  Too often these craven and/or spineless individuals get away with little public indictment for their behavior.  But not always.  Over the weekend the Miami Herald looks at the despicable behavior of Marco Rubio and how he has sold his soul to Donald Trump and the party base.  The irony is that once upon a time some viewed Rubio as a "savior" of the GOP.  Not anymore.  Here are excerpts from the scathing column:

Witnessing Sen. Marco Rubio’s pathetic response last week to President Trump’s latest racist outrages, it is impossible now to believe that Florida’s senior senator was once hailed as “The Savior of the Republican Party” on the cover of Time magazine.

He was supposed to be a rising star who would help shake the party up after the disastrous election of 2012. The son of immigrants, he would help the party overcome its long-term demographic challenge as its older base shrinks and America becomes ever more diverse.

But Rubio flamed out in the 2016 presidential election, among the last victims of Donald Trump’s brutal, degrading, slash-and-burn campaign — though not before lowering himself by trying to beat Trump at his own game, ridiculing the size of his opponent’s hands, suggesting that it reflected on other aspects of Trump’s physiology.

Rubio tried to regain a bit of dignity when he left the race. “America needs a vibrant conservative movement,” he said. “But one that’s built on principles and ideals, not on fear, not on anger and not on preying on people’s frustrations.”

But during the first two-and-a-half years of Trump’s presidency, Rubio abandoned the pretense of idealism or principles, except, perhaps, in his on-target approach to the crisis in Venezuela. Otherwise, he has transformed from Trump critic to a sycophantic cheerleader — derided by former adviser and Washington Post columnist Max Boot as a “Trump fan-boy” — to the point that he’s willing to kill Obamacare even though his own state leads the nation in enrollment. . . . [Rubio] could not find the spine to do more than mildly criticize Trump after his blatantly racist attacks on four Democratic congresswomen.

Even after Trump whipped a crowd in Greensville, North Carolina, into a hateful froth against U.S. Rep. Ilhan Omar that erupted in chilling chants of “Send her back! Send her back!” — Rubio couldn’t muster the courage to truly object to the horrifying display of blatant racism. He called the chant “grotesque,” which it was, but he reserved most of his vitriol for “left wing politicians and many in the media.”

How disappointing. Obviously, he was not the only Republican to punt or remain silent last week. But, Rubio, in particular, should know the dangers of this moment and the path down which Trump is taking his followers, his party and the nation. He should have a deeper understanding of America’s tortured racial history and comprehensive knowledge of the animosity once faced by Cuban immigrants like his parents. He can do better. It leads us to ask whether he thinks his Senate bill, filed Thursday, to extend TPS for Haitians is compensation for his timidity in the face of Trump’s “go back” tweets.

Rubio, far from the Republicans’ savior, seems just another slick politician with his finger in the wind — pushing the party deeper into Trump’s swamp.

Again, Rubio's rejection of morality and decency is not unique in today's GOP.  Sadly, it is the norm.