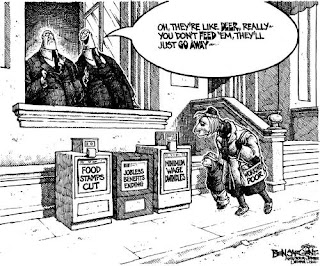 Increasingly, the Republican Party has had to rely on "conservative" Christians as part of its core base. These are people who claim to support Christ's message yet seemingly ignore his exhortations to care for the less fortunate, including feeding the poor and hungry. These claims are exposed, in fact lies, if one looks at the policies of the political party these self-proclaimed Christians support: slashing the social safety net to give tax breaks to the wealthy.  Nowadays, the only things that matter to these people - other than foolishly thinking they will benefit with lower taxes themselves - is seeking to harm LGBT individuals, obsessing over abortion (while caring nothing for children once they are born) and demonizing non-white immigrants.  The disconnect from Christ's message could hardly be more complete. Now, Trump is about to make the GOP war on the poor even more extreme and evangelicals seemingly are cheering on his agenda.  Here are highlights from a piece in the New York Times:

On Tuesday, the Trump administration announced proposed rules that would cut more than three million people off food assistance. This latest plan confirms what many have long suspected: The only thing unifying its policies on poverty is cruelty. Prior right-ring assaults on the poor at least claimed some semblance of a coherent theme. In contrast, this proposal, and earlier ones, are a grab-bag of mutually inconsistent ideas seemingly selected only to maximize harm.

When President Ronald Reagan attacked anti-poverty programs, he claimed to be limiting assistance to the poorest of the poor. He insisted he was protecting a “safety net” for the “truly needy.” To do this, he denied aid to millions of working families. Under the rules he pushed through Congress, almost any wages were enough to disqualify a family from cash assistance and Medicaid within a few months. Working families had their food assistance cut and their paperwork requirements increased.

Of course, his concern for the extremely poor went only so far: The savings from these cuts paid for his massive tax cut for the rich, not for helping the poorest families afford food or housing.

A decade later, another Republican, Newt Gingrich, the speaker of the House, carried out even deeper cuts to anti-poverty programs, contending he was addressing a failure of recipients of public benefits to work. . . . Most welfare recipients did in fact seek and find work — but they were promptly thrown off the assistance rolls when they did.

Here again, the supposed concern was more rhetorical than real: The savings from cutting off recipients without current employment did not go into supports for the working poor but rather more tax cuts for the rich.

But at least Mr. Gingrich had a story. The Trump administration does not.

Last winter, it claimed to be picking up the Gingrich “pro-work” baton when it proposed to end food assistance to almost a million people unable to find work in areas with high unemployment. Nothing in the plan would give job training, help people find work or even do community service in exchange for continued assistance while seeking paid employment.

This spring, the administration released a murky plan to lower the federal poverty line, perhaps sharply. If the administration follows through and lowers the income thresholds that federal and state agencies apply — a change that it probably lacks legal authority to do — millions, possibly tens of millions, of people will be purged from programs that base eligibility on income. Those include Medicaid, school meals, energy assistance and much more. A disproportionately large fraction of these people are members of low-wage working families.

The Trump administration’s initiatives, by contrast, are federal power grabs. Current rules allow childless workers to receive more than three months of food assistance while they seek jobs only when their state certifies that they live in areas with insufficient jobs. The administration would strip states of that power.

The one constant is helping to pay for huge, unaffordable upper-income tax cuts. Mr. Trump pushed through a $2 trillion tax cut in December 2017. This reversed years of declining federal deficits. Most of the benefits went to extremely affluent individuals and corporate shareholders, many of them foreign.

And the day after persuading the congressional leadership to increase the debt limit to accommodate those deficits, the Trump administration announced that, yet again, the burden should fall on those least able to afford it.

How one can claim to be a true Christian and remain a Republican nowadays is mind numbing.  The two are mutually exclusive.
Posted by Michael-in-Norfolk at Wednesday, July 24, 2019