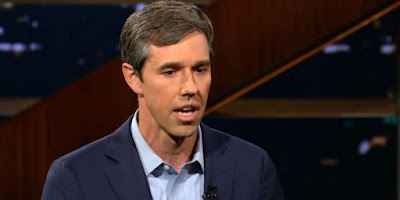 So far I have not decided which would be Democrat nominee I support, although I have most certainly decided on who I do NOT support.  Leading in this category are Bernie Sanders, Elizabeth Warren and Kamala Harris.  I do see the first two as remotely electable despite the views of Sanders' cult like followers who in their own way are as blind to reality as Trump's base. Thus, I was delighted to see Beto O'Rourke out raise Sanders on his first day of fundraising, clearly sending a message that Sanders' may have passed his shelf-life.   Ditto for Elizabeth Warren who has already done herself in with her idiotic claim of Native American ancestry.  A piece in NBC News looks at O'Rourke's fundraising hall.  Here are excerpts:

WASHINGTON — Beto O'Rourke raised $6.1 million in his first 24 hours as a presidential candidate, according to his campaign, surpassing Bernie Sanders and every other 2020 Democrat who has disclosed their figures.

O'Rourke's campaign announced Monday that he had taken in $6,136,763 in online contributions in the day after declaring his candidacy Thursday morning.

"In just 24 hours, Americans across this country came together to prove that it is possible to run a true grassroots campaign for president — a campaign by all of us, for all of us, that answers not to the PACs, corporations, and special interests but to the people," O’Rourke, who has sworn off PAC donations of any kind, said in a statement.

Sanders beat expectations and stunned observers by raising a then-record-setting $5.9 million in his first 24 hours as a candidate last month.

Sen. Elizabeth Warren, D-Mass., raised at least $300,000 on New Year's Eve, her first partial day in the race, according to filings from the online donation clearinghouse ActBlue. But her campaign declined to disclose their complete one-day fundraising picture.

O'Rourke's campaign did say he had collected money from every state and territory in the union before noon on the day he declared his candidacy.

The Texan built a massive email fundraising list during his failed campaign against Cruz and some allies wondered if donors would be as eager to support his presidential campaign as they were to try to oust the Texas GOP senator.