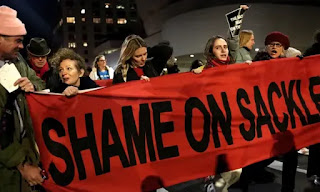 Much of the Trump/Pence.GOP agenda has been aimed at slashing regulations that protect the public and creating a new Gilded Age where the wealthy are allowed to make fortunes at the expense of the larger populace and avoid accountability.  Among some of the most greed driven are the pharmaceutical companies which charge obscenely high prices to Americans for drugs that cost a small fraction of the US cost in Europe, Canada and elsewhere.  Previous post have looked at the greed of the manufacturer of PrEP that protects against HIV infection.  The other huge scandal involves the manufactures of opioids who made billions while misleading doctors and fueling the national opiod crisis.  Among such companies are the manufacturers of Oxycontin who have amassed a fortune at the cost and lives of many Americans.  The owners of that company now face a massive lawsuit to hold them responsible.  Here are highlights from The Guardian:


A group made up of more than 500 cities, counties and Native American tribes across the United States has filed a massive lawsuit accusing members of the Sackler family, who own the maker of the opioid painkiller OxyContin, of helping to create “the worst drug crisis in American history”.

The lawsuit represents communities in 26 states and eight tribes and accuses Sackler family members of knowingly breaking laws in order to enrich themselves to the tune of billions of dollars, while hundreds of thousands of Americans died.

“Eight people in a single family made the choices that caused much of the opioid epidemic,” the lawsuit, filed earlier this week in federal court in the southern district of New York, states.

The same eight members of the family had recently been added to a small number of lawsuits that are underway against a string of opioid-makers, including the Connecticut-based pharmaceutical company the Sacklers wholly-own, Purdue Pharma, but they have not been sued as individuals on anything like this scale before.

“This nation is facing an unprecedented opioid addiction epidemic that was initiated and perpetuated by the Sackler Defendants for their own financial gain, to the detriment of each of the Plaintiffs and their residents. The ‘Sackler Defendants’ include Richard Sackler, Beverly Sackler, David Sackler, Ilene Sackler Lefcourt, Jonathan Sackler, Kathe Sackler, Mortimer DA Sackler, and Theresa Sackler,” this week’s lawsuit states.

Court documents accuse the eight family members of purposely playing down the dangers of the prescription painkiller OxyContin, which is more potent than heroin or morphine. They are accused of deceiving doctors and patients and directing sales and marketing techniques that drove huge over-prescribing and ever stronger doses for many patients who should never have been prescribed the pills in the first place.

“The defendants’ actions caused and continue to cause the public health epidemic…caused deaths, serious injuries, and a severe disruption to public peace, order and safety, it is ongoing and it is producing permanent and long-lasting damage,” the court documents allege.

The lawsuit filed in New York on 18 March is extraordinary because it focuses almost entirely on the individual Sacklers.

Richard and Jonathan Sackler are sons of the late Raymond Sackler, one of the founding brothers of Purdue. Beverly is Raymond’s widow and David his grandson.

Ilene, Kathe and Mortimer David Alfons are children of the late Mortimer Sackler, another of the founding brothers of Purdue, and Theresa is his widow.

The only other defendants named in the lawsuit are the family trust connected to Raymond Sackler’s branch of the family and Rhodes Pharmaceuticals, a company owned by the Sacklers that produces generic opioid painkillers.

Other cases focus mostly on Purdue and other well known pharmaceutical giants involved in opioid production, such as Johnson & Johnson and Allergan.

Drug overdoses now kill more than 72,000 people in the US a year, according to government figures from the Centers for Disease Control and Prevention, and 49,000 of those are caused by opioids.

Purdue’s business has attracted a wave of lawsuits alleging deception about the safety of OxyContin, which the company had admitted misbranding in a 2007 criminal case.

Purdue has not ruled out filing for bankruptcy, which would cause a hiatus in the civil cases brought against it, but also indicates it could be short of the kind of funds that would be needed for a massive settlement or a fine at trial in the cases against it, to compensate communities for the cost of the crisis.

But a victory in the latest lawsuit against the Sacklers would give the plaintiffs access to the Sacklers’ personal fortune.

One can only hope the lawsuit is successful.
Posted by Michael-in-Norfolk at Friday, March 22, 2019