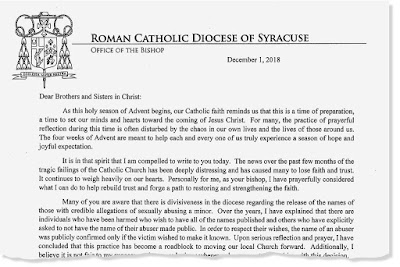 In a prior post I noted how organized religion has been the worse purveyor of anti-LGBT abuse and hatred for centuries.  No part of organized religion has done more to make life a living hell for LGBT people than the Roman Catholic Church which still labels gays as "inherently disordered" and "inclined towards evil" even as the Church is being increasingly shown to be full of predator clergy and defined by rank hypocrisy.  Rather than admit that the Church's rampant sex abuse problem stems from its warped dogma on sex and sexuality and the Church's quest for power and control over others, Pope Francis is joining the chorus that blames the enter problem on gays within the ranks of the clergy.  This lame and disingenuous scapegoating ignores the cover ups and all too often aiding and abetting of predator priests throughout bishoprics literally all across the globe.  A piece in the New York Times looks at the lists (which are said by many to be woefully incomplete) of predatory priests being belatedly released by some bishops as they seek to stem the hemorrhaging of parishioners who are finally walking away in disgust. As the piece notes, it will likely take federal and state prosecutors to ever secure a full accounting of the true numbers of child rapists and molesters the Church has sheltered.  Here are article highlights (the piece begins by referencing a list released by the Diocese of Syracuse where I was raised through high school):


It was a list Charles L. Bailey Jr. had wanted to see for years: the names of the priests in the Roman Catholic Diocese of Syracuse who had been credibly accused of sexual abuse. . . . on Dec. 3, Mr. Bailey got a call from a local reporter. It was up, on the diocesan website. Fifty-seven priests. None were still in ministry and most were deceased, including, there on Page 4, the priest who had repeatedly raped Mr. Bailey when he was not yet a teenager.

As the Catholic Church faces a wave of federal and state attorney general investigations into its handling of sex abuse, bishops around the country have struggled with how to react. Some have locked down defensively. Others are waiting on guidance from the Vatican, which instructed American bishops last month to wait on taking any collective action until the new year.

But dozens of bishops have decided to take action by releasing lists of the priests in their dioceses who were credibly accused of abuse. And they are being released at an unprecedented pace.

The disclosures have trickled out week by week — 10 names in Gaylord, Mich.; 28 in Las Cruces, N.M.; 28 in Ogdensburg, N.Y.; 15 in Atlanta; 34 in San Bernardino, Calif., among many others. All 15 dioceses in Texas have agreed to release lists. Last week, the leaders of two major Jesuit provinces, covering nearly half of the states, released the names of more than 150 members of the order “with credible allegations of sexual abuse of a minor.”

Many of the priests named on the lists are dead, but not all. Many had already been known as abusers, but scores of names are new, even to activists who have been closely following the church abuse scandals for years. Among the known allegations, many of the cases date back generations.

Some victims, as they comb through the lists, say there are names missing. Others see reason for distrust in the fact that the church had names to release at all, nearly two decades after claiming the sexual abuse scandals introduced a new era of transparency.

The lists are coming in the wake of an explosive grand jury report released in August by the Pennsylvania attorney general’s office, detailing at grim length the abuse of over 1,000 people by hundreds of priests. Investigations have followed in more than a dozen states.

The scope of the federal investigation remains unclear. Last month, William M. McSwain, the United States attorney for the Eastern District of Pennsylvania, sent a request to every Roman Catholic diocese in the United States not to destroy documents related to the handling of child sexual abuse.

Still, if releasing the lists was meant to defuse the anger of the church’s critics, there is little evidence it has done that.

In Syracuse, Mr. Bailey said that he had already received calls from victims who said their abusers were not on the list. The name of the priest who had raped Mr. Bailey was listed in a section for clergy who “were deceased at the time of the reporting of the allegation,” a claim he said was contradicted by some of the priest’s abuse victims.Among a laity distrustful of the church’s handling of sex abuse, there is a widespread sentiment that the only way to get the truth is through the subpoena power of law enforcement.

Advocacy groups suggest that bishops could invite the authorities to pore through all of a diocese’s files. Or the authorities could come in uninvited, as was the case when dozens of federal and local agents conducted a surprise search of the offices of the Roman Catholic Archdiocese of Galveston-Houston last month.

The mistrust underlying all this was earned, Bishop Coyne said. The bishops had proven over the last two decades that they had not been able to police themselves. But given the current atmosphere, self-policing might not be an option any more.

“Now I have a reason,” Bishop Coyne said of pushing for the publication of a list. “The list is going to get published anyway.”

Given the complete moral bankruptcy of the Church hierarchy, I remain amazed how otherwise decent people can remain a part of and continue to fund what might well be called a criminal enterprise, especially now that the third highest official at the Vatican has been convicted of child molestation.
Posted by Michael-in-Norfolk at Saturday, December 15, 2018

The sheep’s need to be part of a herd is what keeps them tethered to it. No more, no less. Organized religion perpetuates the idea that it’s needed. It’s their business model.