Signs the Foundation of Trump's Coalition is Cracking 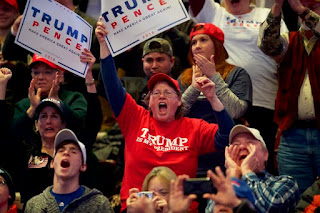 New analysis of the 2018 midterm election results indicate that cracks may be developing in the coalition that thanks to a failure on the part of Electoral College electors put Trump in the White House.  The results of the new analysis also underscores the reality that evangelicals are the principal pestilence in both America's political and social discourse.  Evangelicals reflectively vote Republican and support policies harmful to the poor, the elderly, the sick, and which are decidedly racist and anti-black and anti-Hispanic (the term modern day Pharisees is too kind, in my view).  Meanwhile, the splintering of non-evangelical, non-college educated whites from the Trump coalition could provide an opening for Democrats in 2020 both at the presidential election level and at the Congressional level.  Here are lengthy highlights from a long piece at CNN that looks at this new analysis:

Cracks have emerged in Donald Trump's hold on his core constituency of white working class voters, new data from the 2018 election reveal.

Though Republican candidates almost everywhere registered large margins among white voters without a college degree, Democrats ran much more competitively among the roughly half of that group who are not evangelical Christians, according to previously unpublished results from the 2018 exit poll conducted by Edison Research for the National Election Pool, a consortium of media organizations including CNN.Democrats, the analysis found, ran particularly well this year among white working-class women who are not evangelicals, a group that also displayed substantial disenchantment in the exit poll with Trump's performance. Those women could be a key constituency for Democrats in 2020 in pivotal Rust Belt states such as Michigan, Wisconsin and Pennsylvania, where relatively fewer blue-collar whites are also evangelical Christians.Nationwide, nearly three-fifths of blue-collar white women who are not evangelicals voted Democratic in last month's House races, while an equal number said they disapproved of Trump's performance in office, the analysis of exit poll results found.
"It's another overlay to the conclusion that there are some parts of the white non-college population that are open to Democrats and can be moved a few points in your direction," says Ruy Teixeira, a long-time Democratic analyst of voting trends who now serves as a senior fellow at the liberal Center for American Progress.Though these distinctions sound like fodder for a cocktail hour argument at a political science faculty lounge, they actually inform a backstage debate simmering among Democratic strategists about 2020. This debate has clear implications for the message the party develops over the next two years and the kind of nominee it chooses against Trump in the next presidential election.At issue is how much emphasis the party should place on trying to recapture white working-class voters as opposed to maximizing turnout among its new base of minority, millennial and college-educated white voters, especially women and those in urban areas.Strategists in this camp argue it would be a mistake for the party to downplay outreach to white working-class voters who are not evangelicals, especially the women in that group.

This bubbling private debate has given rise to a new and improbable acronym that some Democrats see as a potentially pivotal group for 2020: WNCNEW, as in white non-college, non-evangelical women.
"WNCNEW is the group Democrats should care about," one Democratic strategist insisted in an email. Those women represented about one in nine voters nationally this year and an even larger share in key Rust Belt battlegrounds.In practical terms, the party and its presidential nominee in 2020 inevitably will try to turn out its new base and to regain blue-collar voters of both genders from Trump: the decision facing the party is not either/or. But Democrats will face a genuine choice of emphasis.The detailed exit poll results provided to CNN show clear openings for Democrats with some groups of white working-class voters. But they also indicate that Democrats still face significant headwinds with most of those blue-collar whites and that white evangelical Christians look increasingly monolithic in their support for Republicans. That's a big challenge for Democrats in many southern states, where half or more of working-class whites are also evangelical Christians.To illuminate these subtle but critical distinctions, Edison Research analyzed results from the 2018 exit poll in its national sample and in seven states where voters were asked whether they are evangelical Christians.
Nationwide, the exit poll found that evangelical Christians this year comprised fully 45% of all white voters without a college degree, a substantial portion of the total electorate. By contrast, evangelicals represented only one-fourth of college-educated white voters.At least 77% of white evangelicals without a college degree voted against the Democratic Senate candidates in Florida, Missouri and Tennessee, while 72% opposed defeated Democratic incumbent Joe Donnelly in Indiana, the exit polls found. In the Georgia governor's race, a breathtaking 89% of non-college white evangelicals voted for Republican Brian Kemp over African-American Democrat Stacey Abrams; 84% of those voters picked Ted Cruz over O'Rourke in Texas. Only Democratic Sen. Joe Manchin in West Virginia ran competitively, losing those voters by a narrow 52% to 46% margin.In House races, the exit polls found that exactly three-fourths of white evangelicals without a college degree voted Republican, while only about one-fifth supported Democrats. . . . . The picture wasn't appreciably better among white evangelicals with a college degree.
The collapse of any meaningful distinctions among evangelicals reflects both their hardening loyalty to the GOP and the contraction of their overall numbers, says Robert P. Jones, chief executive officer of the Public Religion Research Institute, a non partisan group that studies religion, values and politics.In PRRI surveys, he notes, evangelical Christians have declined from about 21% of the total population in 2008 to 15% this year. That erosion, Jones says, has been "asymmetrical," with younger and better-educated members becoming the most likely to leave the faith. That's left behind a group that is older and more uniformly conservative.But if the 2018 election results highlight the solidifying uniformity of white evangelicals — male and female, college-educated or not — the findings simultaneously illuminate pressing reasons for Republican concern about white voters who are not evangelicals, both those with and without college degrees.Democrats carried fully two-thirds of college-educated whites that are not evangelical Christians. That included not only a head-turning 71% of college educated white women who are not evangelicals but also 59% of the equivalent men. The shares that said they disapproved of Trump's performance were even higher in both groups: 74% of the women and 63% of the men.

Democrats carried about three-fifths of these non-evangelical white-collar whites in the Florida Senate race and about two-thirds of them in Indiana, Tennessee and Missouri. Even in Texas, O'Rourke carried 61% of them, while Abrams won 55% of them in the Georgia governor's race. Those geographically dispersed results testify to the breadth of the recoil from the Trump-era GOP among these well-educated white voters that Republicans in an earlier generation considered part of their base.In the national House exit poll, Democrats actually carried a slim 52% to 46% majority among non-college whites who are not evangelicals, though with a significant gender gap. While Democrats won the blue-collar women who are not evangelicals by 16 percentage points, Republicans won the equivalent men by 9 points. And while 56% of those non-evangelical blue-collar men said they approved of Trump's performance in office, 58% of the equivalent women said they disapproved. Those are the so-called WNCNEW that some Democrats see as an essential target for 2020.[T]he 2018 exit polls showed that among both working-class white men and women who are not evangelicals, Democratic House candidates won a measurably higher share of the vote than Hillary Clinton did in the 2016 presidential race. In the heavily blue-collar Rust Belt states that tipped the 2016 election to Trump — particularly Michigan, Wisconsin and Pennsylvania — even small improvements might be enough to tilt the result the other way. As Teixeira says, when trying to reverse Trump's narrow margin of victory in the decisive states, "it all counts."

Posted by Michael-in-Norfolk at Tuesday, December 11, 2018