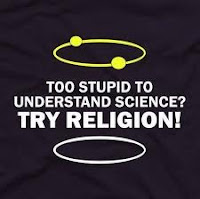 I've often wondered how Christianists and the Tea Party crowd can cling to beliefs that defy logic and scientific fact. Now, we may have the answer: they're simply stupid. I mean literally dumb from an intelligence perspective. A new study done by researcher Gordon Hodson, a psychologist at Brock University in Ontario, Canada, finds that those with low intelligence gravitate towards conservatism and are prone to embrace prejudice of things they don't understand or that are different. I can already hear Tony Perkins and the anti-gay professional Christian set howling and bellowing that Hodson's work is biased or slanted. When you think of about, however, the correlation tracks with a great deal of everyday experience in dealing with people. If you can't think for yourself, you're an easy target for demagogues who like to blame problems and failings on "the other." Here are some highlights from Yahoo News on the study findings:

There's no gentle way to put it: People who give in to racism and prejudice may simply be dumb, according to a new study that is bound to stir public controversy.

The research finds that children with low intelligence are more likely to hold prejudiced attitudes as adults. These findings point to a vicious cycle, according to lead researcher Gordon Hodson, a psychologist at Brock University in Ontario. Low-intelligence adults tend to gravitate toward socially conservative ideologies, the study found. Those ideologies, in turn, stress hierarchy and resistance to change, attitudes that can contribute to prejudice . . .

The findings combine three hot-button topics. "They've pulled off the trifecta of controversial topics," said Brian Nosek, a social and cognitive psychologist at the University of Virginia who was not involved in the study. "When one selects intelligence, political ideology and racism and looks at any of the relationships between those three variables, it's bound to upset somebody."

Polling data and social and political science research do show that prejudice is more common in those who hold right-wing ideals that those of other political persuasions . . .

Earlier studies have found links between low levels of education and higher levels of prejudice, Hodson said, so studying intelligence seemed a logical next step. . . . As suspected, low intelligence in childhood corresponded with racism in adulthood. But the factor that explained the relationship between these two variables was political: When researchers included social conservatism in the analysis, those ideologies accounted for much of the link between brains and bias. People with lower cognitive abilities also had less contact with people of other races.

Hodson was quick to note that the despite the link found between low intelligence and social conservatism, the researchers aren't implying that all liberals are brilliant and all conservatives stupid. The research is a study of averages over large groups, he said.

Nonetheless, there is reason to believe that strict right-wing ideology might appeal to those who have trouble grasping the complexity of the world. "Socially conservative ideologies tend to offer structure and order," Hodson said, explaining why these beliefs might draw those with low intelligence. "Unfortunately, many of these features can also contribute to prejudice."

They found that what applies to racism may also apply to homophobia. People who were poorer at abstract reasoning were more likely to exhibit prejudice against gays. As in the U.K. citizens, a lack of contact with gays and more acceptance of right-wing authoritarianism explained the link.

Interestingly, this study would seem to affirms some prior reports that found that evangelical Christians had lower IQ's and lower levels of education than denominations such as Episcopalians and Lutherans.

The study does not surprise me. I've observed it all my life.

There is not doubt that the lower one is on the socioeconomic scale, the more fundamental is his outlook on religion and life itself.

There are other factors at work however. Family traditions play a part. One raised in a family which has always been a part of a fundamental religion may cling to that religion simply because he thinks he has to.

Often this type of person makes no bones outside the family that he doesn't agree with the dogma of the group. A good example of that was a cousin of mine who was Catholic yet he and his wife used birth control pills. His stance was, "The Pope doesn't play the game, so he can't make the rules."

Another factor at work is that some people simply don't like making big life decisions. They prefer to let other make them for them. Religious matters can be full of very hard decisions. For a believer they can be the difference between Heaven and Hell. Better to let someone else just tell you what you should do rather than struggle with a decision yourself. Of course this may have something to do with IQ too.

Thanks for sharing the study.

Stole your graphic, Thanks.

the rest is in God's hands now... I know I'm putting it all in His hands, cause I trust Him more than I trust myself, or anyone on this earth for that matter...
Part of my niece's post on facebook. I have never understood how people can admit being too dumb to think for themselves. Dittoheads are another example.

As the saying goes, not all conservative people are stupid but all stupid people are conservative. And right-wing politicians have been taking advantage of this for years.

In my experience, "teh stupid" crosses all socio-economic boundaries. I was educated in at prep schools and a university for the very wealthy, and believe me, the poor and uneducated have no claim on being idiots.
"Born on third base and thinks he hit a home run" is how many of them were/are. They inherit their family's wealth and status, and as long as they maintain it (which doesn't take much in the way of brains), they continue to sit in the influential positions in society.
There's an inherent selfishness that precludes and clouds clear and deep thinking in this class.
It's much like the old aristocracy of Europe. They rule because they were born into it, not because they have the intelligence or ethics and morality to do it.
Certainly there are some, such as the Roosevelts and the Kennedys, and in my school there were those wealthy who were making something of themselves and had some perspective. On the whole however, I found those born into privilege to be paradoxically educated and dumb as fuckin' rocks. Sorry for swearing.

What an ironically convenient study...providing justification for bigoted attitudes against nasty conservatives.