The Republican Party is Diseased and Dangerous 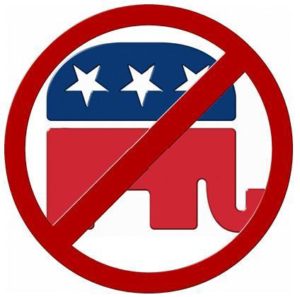 As expected Liz Cheney was stripped of her leadership position in the House Republican caucus for committing the new cardinal sins in the GOP: she refused to embrace the "Big Lie" that the 2020 election was "stolen" from Trump and she refused to utterly prostitute herself to the malignant narcissist/sociopath at Mar-a-Lago.  Whether Cheney truly refused as a matter of conscience to lie about Trump's loss or she sees some long game to win down the road is hard to know.  In the short term, however, her ouster confirms that today's GOP is diseased, morally bankrupt and a threat to America's democracy at both the state and federal level (the Virginia GOP's selection of Glenn Youngkin as it gubernatorial candidate shows the sickness in Virginia).  One can only hope that the cult of Trump and the abject dishonesty that is now a requirement of being in the GOP will motivate  additional suburban voters to flee the GOP.  A column in the New York Times by former Republican who served in the Reagan, George H.W. Bush and George W. Bush administrations looks at the putrid state of the GOP.  Here are excerpts:

The takedown of Representative Cheney was not an “inflection point,” as some have called it. It was the opposite — the latest (but it won’t be the last) confirmation that the Republican Party is diseased and dangerous, increasingly subversive and illiberal, caught in the grip of what Ms. Cheney described in The Washington Post as the “anti-democratic Trump cult of personality.”

“Remaining silent and ignoring the lie emboldens the liar,” Ms. Cheney, unbroken and unbowed, said in a speech on the House floor Tuesday night. “I will not participate in that. I will not sit back and watch in silence while others lead our party down a path that abandons the rule of law and joins the former president’s crusade to undermine our democracy.” Her Republican colleagues, cowardly and classless, cleared the chamber as she began her remarks. But they can’t escape her searing indictment.

Declaring fealty to a lie has become the single most important test of loyalty in today’s Republican Party. Everyone recognizes this, but from time to time we need to stop to register its true significance.

“It’s a real sickness that is infecting the party at every level,” Barbara Comstock, a Republican who represented Virginia’s 10th Congressional District before Mr. Trump’s unpopularity in the suburbs sank her chances in the 2018 election, told Lisa Lerer of The Times. “We’re just going to say that black is white now.”

This should come as a surprise to exactly no one. For more than five years, the Republican Party and its leading media propagandists embraced and championed Mr. Trump’s mendacities, conspiracy theories and sociopathic tendencies.

As a result, they have detached themselves from reality. The expectation that once Mr. Trump left office the Republican Party would become a normal party again was wishful thinking from the beginning. There is no post-Trump fight for the “soul” of the Republican Party. At least for now, that battle has been decided.

Liz Cheney understands that only a decisive break with Mr. Trump will stop the continuing moral ruination of the Republican Party. But her break with the former president, while courageous, came too late to change anything. She is trying to rally an army that doesn’t exist.

It doesn’t exist for two reasons. The first is that many grass-roots Republicans, having been fed a steady diet of fabrications and disinformation for the last half-decade, are deluded. They believe Mr. Trump’s conspiracy theories, in large measure because they want to believe them, and now they are addicted to them. And addictions are hard to break.

These Republicans believe they are truth-tellers and patriots, sentries at freedom’s gate. They are utterly sincere; they are also quite dangerous. They are taking a sledgehammer to pillars of American democracy: confidence in the legitimacy of our elections, the rule of law and the peaceful transfer of power.

Most Republican members of Congress, on the other hand, don’t believe President Biden was illegitimately elected. Kevin McCarthy, Elise Stefanik, Josh Hawley, Ted Cruz and Lindsey Graham aren’t deceived. They are play acting in ways that are unethical and cynical, but they are not stupid. They’re fully aware that the cancerous lies have metastasized — they each played a crucial role in spreading them, after all — and to refute those lies publicly would put targets on their backs.

Many of the most influential figures in Republican politics have decided that breaking with Mr. Trump would so alienate the base of the party that it would make election victories impossible, at least for the foreseeable future.

So we have reached the point where a member of one of the Republican Party’s leading families, a person of unquestioned conservative credentials, is now less popular with the Republican base and more reviled by the House leadership than the onetime QAnon supporter Marjorie Taylor Greene, who just before the Jan. 6 insurrection referred to that day as Republicans’ “1776 moment.”

Ms. Cheney was stripped of her leadership post because she committed the unpardonable sin in 2021’s Republican Party: She spoke the truth about the legitimacy of the 2020 election results and refused to back down. Whatever she was before, she is a voice of conscience now, reminding her colleagues of their Faustian bargain with their peculiar Mephistopheles, Donald Trump. It enrages them even as it haunts them.

Today the Republican Party is less a political party than a political freak show. It is being sustained by insidious lies. And people who love America, starting with conservatives, should say so. Otherwise, if the Republican Party’s downward spiral isn’t reversed, it will descend even further into a frightening world of illusion.

Sadly, at this point only Trump's death - or perhaps repeated electoral defeats - can alter the GOP's course to total moral ruin.