In Today's GOP Honesty is the Biggest Crime 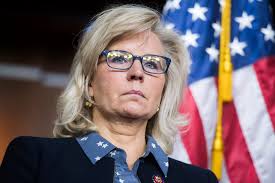 I disagree with Liz Cheney on a host of issues, but we do agree on one thing: the "Big Lie" promoted by Donald Trump is a lie and patently untrue.  Sadly, by some polls 70 percent of self-identifying Republicans (a percentage of the population which has thankfully shrunk) are onboard with the lie due to their stupidity/ignorance, their prejudices, and/or because they are afraid of the increasingly hideous base of the GOP.  Donald Trump may have taken promoting and embracing lies to its current heights in the Republican Party, but the process did not begin with him.  He merely saw the willingness of much of the party base to embrace lies if it legitimized the base's hatreds and sense of loss privilege and took advantage of the vulnerability.  Where did it all begin?  In my view, as I have stated often, it began with the rise of evangelicals and Christofascists within the GOP - a group whose very world view depends on the denial of knowledge and scientific truths.  Moreover, these people are only too happy to attack those who reject their fantasy world and house of cards belief system.  They were the perfect mark for Trump and remain his strongest supporters.  A column in the Washington Post looks at how supporting the truth is now the biggest crime in today's GOP.  Here are highlights:

Near the beginning of the document that made us free, our Declaration of Independence, Thomas Jefferson wrote: “We hold these truths to be self-evident.”

There you have it. From the very beginning of America, our freedom has been predicated on truth. For without a principled fidelity to truth and to shared facts, our democracy will not last.

On Wednesday, Rep. Liz Cheney (R-Wyo.) will most likely lose her leadership post within the House Republican Conference, not because she has been untruthful. Rather, she will lose her position because she is refusing to play her assigned role in propagating the “big lie” that the 2020 election was stolen from Donald Trump. Cheney is more dedicated to the long-term health of our constitutional system than she is to assuaging the former president’s shattered ego, and for her integrity she may well pay with her career.

Ladies and gentlemen, this is your contemporary Republican Party, where today there is no greater offense than honesty.

It seems a good time to examine how we got to a place where such a large swath of the electorate (70 percent of Republican voters, according to polling) became willing to reject a truth that is so self-evident.

This allergy to self-evident truth didn’t happen all at once, of course. This frog has been boiling for some time now. The Trump period in American life has been a celebration of the unwise and the untrue. From the ugly tolerance of the pernicious falsehood about President Barack Obama’s place of birth to the bizarre and fanatical fable about the size of inauguration crowds, to the introduction of the term “alternative facts” into the American lexicon, the party’s steady embrace of dishonesty as a central premise has brought us to this low and dangerous place.

When I became an unwitting dissident in my party by speaking in defense of self-evident truths, I assumed that more and more of my colleagues would follow me. I remain astonished that so few did. Congresswoman Cheney, I know how alone you must be feeling. But just know that history keeps the score, not Kevin McCarthy or Elise Stefanik.

In January 2018, three years before the Capitol insurrection, I said the following on the Senate floor: “Mr. President, let us be clear. The impulses underlying the dissemination of such untruths are not benign. They have the effect of eroding trust in our vital institutions and conditioning the public to no longer trust them. The destructive effect of this kind of behavior on our democracy cannot be overstated.”

Three years later, it’s clear that I didn’t know the half of it. The destructive effect of the president’s behavior — and the willingness of Republican elected officials to indulge, excuse, defend, justify and, in many cases, just roll with it — has taken a devastating toll.

[W]e did not become a great nation by believing or espousing nonsense, or by embracing lunacy. And if my party continues down this path, we will not be fit to govern.

Cheney has proved her fitness, and today it seems that adherents to the “big lie” will cast her out. Hold your head high, congresswoman. Those of us who believe in American democracy and who live in objective reality are grateful that you have chosen to take a stand for truth — self-evident truth — regardless of the consequences.