A Never/Trumper on Trump and Covid: What Did You Expect? 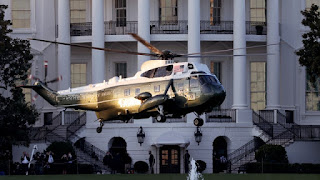 Between driving to and from court and driving to and from the firm's Virginia Beach later in the day I spent a good deal of time listening to satellite radio - the POTUS channel to be exact - which included an interview with a public health expert who stated that their big surprise was that Donald Trump had not contracted Covid-19 long before now give his and his White House administration's constant refusal to follow health care expert recommendations, including social distancing and wearing masks. Now, the chickens have finally come home to roost and Trump, his wife, other White House staff, at least one Republican senator have all contracted the virus.  More frightening to health experts is the likelihood that various of Trump's events over the last week may prove to be super spreader events with everyone from donors to campaign staff and security detail personnel having been exposed. David Frum, a fervent Never/Trumper and former Republican has a column in The Atlantic that states the all too obvious: what did people expect given Trump's narcissism and care only about himself/satiating his ego.  No one should be surprised and if anyone is entitled to concern and deference it is the innocents - which excludes his MAGA followers - who because of Trump and his constant failures in the context of the coronavirus have become sickened or died.  The irony now is that some say Trump deserves the type of sympathy and "good thoughts" that he has never afforded to others.  Here are column excerpts:

There is a great deal you have every right to expect at this moment of crisis, and no reason at all to believe that Donald Trump or his White House will provide it.

You cannot expect this White House to tell the truth about Trump’s health. His doctors have lied about the president’s weight and height. They have never offered an adequate explanation of his sudden, unscheduled visit to Walter Reed National Military Medical Center a year ago. Even the fact that a close aide to the president had tested positive for the coronavirus was kept from the public until Bloomberg broke the news.

You cannot expect the White House to produce any orderly plan for the execution of Trump’s public duties, even to the very limited extent that Trump executed public duties in the first place. British Prime Minister Boris Johnson was diagnosed with COVID-19 on April 6 of this year. Johnson formally deputed Foreign Minister Dominic Raab to preside over the government during his own incapacity. But the pattern in the Trump administration has been that the president will not and cannot do the job himself, and that he vengefully strikes down anyone who tries to do the job for him.

Trump fired his most successful chief of staff, John Kelly, for trying to force him to work. Kelly’s successor, Mick Mulvaney, survived by enabling Trump “to act as he chooses—a recognition that trying to control Trump is a futile approach,” as Politico’s Nancy Cook put it. Likewise, Vice President Mike Pence had better be awfully circumspect about filling the role that the Constitution and its Twenty-Fifth Amendment assign him. Trump will be watching. So long as Trump is conscious, he will not allow it; should he lose consciousness, he will retaliate when and if he recovers.

You cannot expect the White House to exhibit any regard for the health of others. [Trump] The president knowingly exposed his wife, his adult children, his staff, his donors, and his supporters in the Cleveland debate hall. He refused and forbade the most basic safety precautions in the close quarters of the West Wing and on Air Force One, except for testing, which was intended to protect him personally. On Tuesday, Trump was on the debate stage mocking former Vice President Joe Biden for wearing face masks; as the positive tests came in, he did not bother to inform Biden or his team that Trump had exposed him to the coronavirus.

Until we know the date of Trump’s last negative COVID-19 test, we can only guess at the number of people he exposed. By sticking to an aggressive travel schedule with in-person gatherings while eschewing even minimal safeguards, Trump has carried the risk of disease across the country.

You cannot expect Trump to gain any wisdom, empathy, or compassion for others. Throughout the pandemic, Trump has disdained the hardships suffered by sick and dying Americans, by their families and neighbors, by those who have lost jobs and homes.

What you can expect is a lot of victimhood and self-pity. Trump and those around him have always demanded for themselves the decencies that they refuse others. They will get them, too. Trump’s opponents will express concern and good wishes—and if they do not, Trump’s allies will complain that those opponents are allowing politics to overwhelm human feeling.  It was only three days ago that Trump on a debate stage dismissed Biden’s dead son, Beau, and falsely claimed that Biden’s surviving son, Hunter, had been dishonorably discharged from the military. . . . Now, though, we will hear a lot about how people are not being respectful enough to a president in his time of illness.

Trump has all his life posed a moral puzzle: What is due in the way of kindness and sympathy to people who have no kindness and sympathy for anyone else? Should we repay horrifying cruelty in equal measure? Then we reduce ourselves to their level. But if we return indecency with the decency due any other person in need, don’t we encourage appalling behavior?

Americans are dead who might have been alive if Trump had met the challenge of COVID-19 with care and responsibility—or if somebody else, literally almost anybody else, had been president instead. Millions are out of work, in danger of losing their homes, living in fear. Tens of millions of young people have suffered disruption to their education, which will follow them through life. The pandemic was not Trump’s fault, but at every turn, he made things worse than they had to be—because at every turn, he cared only for himself, never for the country. And now he will care only for himself again.

Trump should never have been allowed anywhere near any public office. Wish him well, but recognize that his deformed spirit will never be well—and that nothing can be well for the country under his leadership.

The column sums up the situation well.