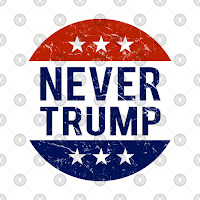 The New York Times has scored a coup and obtained copies of Donald Trump's tax returns covering close to a 20 year period.  The story they tell is that of a con man who has duped many into believing he is a skilled businessman.  They also reveal that Trump has paid almost no federal income taxes for that same period of time. Indeed, his working class supporters pay many multiples of what Trump has paid.  No doubt Trump see such people as suckers as he continues to milk U.S. taxpayers while in office. The returns also show that Trump has a mountain of debt that will be coming due with the next few years.  In response, Trump - true to form - lied and called the times reporting "fake news."  Now, a piece in The Atlantic suggests that Trump may have lost control of the narrative in these last days before the 2020 election despite which will no doubt see strenuous efforts on Trump's part to distract and change the conversation.  Here are column highlights:

Remember: Back in 2015, when Donald Trump announced his campaign for president, about one-third of Republicans and Republican-leaners condemned the distribution of wealth in the United States as unjust. Those class-aggrieved Republicans believed that high earners paid too little in tax and wanted taxes on corporations and rich people raised, not cut. Those were the Republicans who rejected Jeb Bush and Ted Cruz—and elevated Trump as the party nominee instead.

Trump voters were more economically pessimistic than other Republicans. They were more racially aggrieved. They identified themselves as people who worked, who were mooched upon from below and exploited from above.

Trump spoke powerfully to those voters. He told them a story about corrupt elites, symbolized first by his Republican rivals, then by Hillary Clinton. . . . . He alone would bring class justice to this country, redirecting benefits from the super-rich to deserving people such as themselves. On Fox & Friends that August, he complained about financiers avoiding taxes: “They should be taxed a fair amount of money,” he said. “They’re not paying enough tax.” He committed that when he got hold of power, he would sacrifice his own interests to look out for the people who had trusted him.

Trump repeatedly insisted that the presidency had “cost me billions.” In an October 2018 call to Fox & Friends, he estimated the loss at $2 billion to $3 billion. At a press conference a year later, he upped the estimate of his sacrifice to $5 billion. Trump’s son Don Jr. compared the family’s sacrifices to the heroism honored at Arlington National Cemetery. In his book Triggered, he described his feelings on a visit to Arlington: “In that moment, I also thought of all the attacks we’d already suffered as a family, and about all the sacrifices we’d have to make to help my father succeed—voluntarily giving up a huge chunk of our business and all international deals to avoid the appearance that we were ‘profiting off the office.’”

The definitive debunking of this lie now does two things.

First, it melts Trump’s support a little more. Trump’s hopes for 2020 depended on fantastic overperformance with white voters without college degrees. He’s lost so much support elsewhere that he must hold every last member of his core group. He doesn’t need to decline much among these voters to convert any faint hope of success into certainty of disaster.

Second, and perhaps more important, the ink-on-paper confirmation of Trump’s indebtedness, tax dodging, and all-around crookedness will get into Trump’s head. His political project through the pandemic has been to mess with his opponents by hurling one crazy distraction after another. Now, suddenly, it’s his own decision loop that has been disrupted. On the preexisting trajectory of the 2020 campaign, Trump was going to lose—and probably lose big. He needed something to happen either to help him or, more plausibly, to push the Biden camp into some mistake or misstep. Now the banana peels have been dumped beneath his own feet.

At a press conference on the afternoon the New York Times Trump tax story broke, he denounced as false the report that he had paid only $750 in tax in 2017. Watch his face as he issued the denial, though, and you can see him belatedly foresee the follow-up question: “But can you give people an idea of how much you actually are paying?” Trump was visibly scrambled.

Scrambled, too, are whatever plans Trump may have had for the first presidential debate tomorrow night. He may try to huff and puff—a tactic that might have saved the day if he were sitting on a lead. Instead, he’s trying to climb out of an eight-to-10-point deficit. Gravity is now pulling harder against him.

For once in his life, Trump seems tongue-tied. His supporters, even those willing to be shameless, have been left to desperately contrive messages of their own. They are not doing a very good job, in part because they must worry about the line that Trump will eventually want them to take, when he finally announces a line. Not many days and hours remain, and Trump has abruptly lost almost any vestige of control over either the game or the clock.

Posted by Michael-in-Norfolk at Monday, September 28, 2020