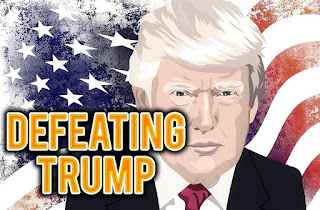 Among my Republican "friends" my deduction is that those who are not racist remain focused on their tax bills and money and, therefore are unwilling to open their eyes to the threat Donald Trump poses to America's democracy, not to mention traditional standards of decency and morality.  Some may even applaud his tax avoidance tactics - assuming they don's involve out and out tax fraud, a distinct possibility - while the rest of us are viewed as suckers for paying taxes (the husband and I recently paid roughly 53 times Trump's last reported tax payment).  Seemingly, no thought is given to the damage Trump is doing to the nation's institutions and the morally bankrupt example he provides for children and youths who are more aware of his immorality than many like to assume. Historians who study who study nations that have fallen into dictatorship, however are very brutal in their rating of Mr. Trump.  A piece in New York Magazine looks at the danger and the need of everyone opposed to his agenda - and targeted by his racism and pandering to Christofascists - to register and get out and vote in November.  Here are article highlights:

The reaction couldn’t have been more different from leading scholars and historians who study countries that have fallen into dictatorship. A half-dozen prominent academic figures interviewed by Intelligencer warned of extreme danger for the country and analogized the United States right now to Eastern European and Latin American countries that faced a breakdown of the democratic order and sometimes plunged into autocracy as a result. Even so, they cautioned that analogies are only so useful given the unprecedented nature of events in the United States.

Harvard political scientist Steven Levitsky, the co-author of the book How Democracies Die, noted the chance of “an outright stolen election and Trump refusing to give up power … is quite low.” But he noted “the chances of a serious crisis are probably 50-50 at this point. Particularly given that there is a good chance even though Biden is ahead [in polls], given the distribution of voting on election night that Trump could either be tied or ahead.” He added that “the one thing I’m confident about that Trump will cry fraud, so I think there is a pretty good chance of a serious crisis on Election Night that will make Florida in 2000 look like a walk in the park.”

But while Levitsky conceded, “I don’t think fascism is around the corner … we’re not headed for 20 years of a Trump dictatorship,” other experts were more concerned.

“It’s hard for me as an historian to think of a coup d’état as well telegraphed in advance,” warned Timothy Snyder, a professor at Yale and a scholar of Eastern Europe’s blood-soaked history.

Snyder noted that Trump’s repeated comments dismissing the legitimacy of the election “make it clear to us that he wants to stay in power illegally.” In Snyder’s view, this is “characteristic of an authoritarian or pre-authoritarian situation.” He said that there will likely be a power struggle after the election unless the Democrats win decisively. He analogized the situation to Serbia in 2000 where the opposition to President Slobodan Milosevic knew “that it had to win by at least ten points … by some kind of margin that looks big.”

With Trump under apparent criminal investigation, Snyder saw Trump in “a classic authoritarian position. He has to win for its own sake, he doesn’t want to go to prison.”

“He knows he’s broken lots of laws and wants to die in his own bed.”

There was also debate about how much of the danger is due to Trump’s unique personality and how much is about institutional rot within the United States. Valerie Bunce, a political scientist at Cornell, said “as someone focused on institutions, all democracies have flawed institutional designs and there are always tradeoffs.”

Scholars repeatedly pointed to the Electoral College as one such flaw that has led the loser of the popular vote to win the White House twice this century. A repeat of this scenario is a particular danger in the view of Joshua Tucker, a professor at New York University and co-director of NYU’s Center for Social Media and Politics. “Eventually, at some point people are no longer going to see the system as legitimate and that is a serious concern,” he said.

Trump’s complete takeover of the Republican Party also prompted scholars to point to parallels abroad. The best example, according to Bunce, was Hungarian strongman Viktor Orban, who remade the Fidesz political party into the standard-bearer for his vision of “illiberal democracy.” But Bunce also noted that Orban, who has drawn praise from Trump and many in the his inner circle, had structural advantages that Trump does not.

Domestic parallels were harder to come by. Sean Wilentz, an award-winning historian at Princeton University, thought the “the great parallel” was the election of 1860 where slaveholders were not willing to accept any Republican president and seceded when Abraham Lincoln was elected. Granted, Wilentz said the “ideological issues today were not quite as sharp,” and the country is not as purely sectional . . . .

Indeed, comparisons only go so far. As Levitsky put it, “It’s hard to come up with parallels because there are so few cases of established stable democracies in wealthy countries that have had a crisis like this.”

The ultimate specter for those who study the decline of democracy is, of course, Germany and the rise of Adolf Hitler.

Zilblatt said he once laughed off comparisons of the U.S. to the Weimar Republic, noting Germany in the early 1930s “had a major economic crisis and the trauma of millions of people dead in World War I.” However, while it’s not exactly the same, Zilblatt said Americans are nevertheless “suffering economically and from the trauma of death and being isolated” amid a recession and a pandemic that has left over 200,000 dead barely a month before Election Day.

Obviously, neither Hitler nor fascism is coming around the corner in the United States. But, the fact that such a comparison can even be considered by a serious political scientist with a straight face shows how far things have degenerated.