The Insanity of Pence's "Latinos for Trump" Initiative 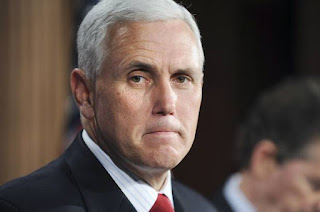 Donald Trump has called Mexican and Central American migrants coming to the United States  “rapists,” “criminals,” and “animals,” yet has his morally bankrupt lap dog, Mike Pence out launching an initiative called "Latinos for Trump."  Apparently, Trump and Pence are hoping there is an element within the Latino voting block that will act like gay Republicans and vote against their own best interests and certainly that of their larger community.  The further irony of the endeavor is that Trump's core base of white supremacists and evangelical Christians (the two groups, in my view are more or less synonymous) absolutely hates Latinos - indeed anyone without lily white skin.  So far, the Trump/Pence theme is playing heavily on the supposed dangers of socialism in the form of expanded health care for all and, will likely include calls to religious extremists within the Latino community and Cubans still more obsessed with harming Cuba than their own best interests in America.  A piece The Atlantic looks at this effort to recruit supporters for their own worse enemy.  Here are excerpts:

Vice-President Mike Pence, an Irish-American from Indiana, visited Miami on Tuesday to launch a new 2020 initiative for his boss’s reelection called Latinos for Trump. Describing it as “one of the most important coalitions of the 2020 campaign,” Pence praised the president — whose robust support of the demographic mostly consists of a picture of himself with an inedible Trump Tower taco bowl and the caption “I love Hispanics!” — as “a great champion of Latino and Hispanic Americans.”

There are many reasons why Pence’s statement isn’t true, and why this thing is unlikely to work. Polling among Hispanic voters seems to be the most prominent one: In Florida, which has a more conservative Hispanic population than in other states, only 34 percent of Hispanic voters said they’d reelect Trump while 56 percent said they’d elect a Democrat, according to a poll by Telemundo and the firm Mason-Dixon.

In California, that ratio dipped to 26-66 and dropped further in Texas, where just 25 percent of Hispanic voters want a two-term Trump presidency and 69 percent want him out in January 2021. In the New York metro area, only 19 percent want him reelected, while 73 percent prefer a Democrat.

If the numbers show a grim chance for Trump’s viability among Latino voters, [Trump's ]the president’s rhetoric certainly isn’t helping. (Nor does his administration’s failure to respond to Hurricane Maria benefit his image among the estimated 1.2 million Puerto Ricans living in Florida.) For four straight years, he has derided Mexican and Central American migrants coming to the United States as “rapists,” “criminals,” and “animals,” a verbal history that certainly hollows out Pence’s “great champion” designation. As In the Thick host Julio Ricardo Varela wrote last year:

It’s pretty clear that the xenophobic narrative of all Latinos as somehow “other” has become a central part of his administration’s policies. From the Central American children dying preventable deaths at the Southern border, to ending temporary protected status for Haitians, Nicaraguans, Salvadorans and Hondurans who fled wars and natural disasters, to making it more difficult for victims of domestic violence to apply for asylum, to parading around white people whose family members were victims of crimes by undocumented immigrants (even though immigrants are less likely to commit serious offenses and now less likely to report being victimized), Trump’s rhetoric about “Mexicans” was as much about bashing Latinos in general as about Mexican Americans in particular.

A heavy theme of Pence’s speech was the dangers of socialism, comparing the offerings of Medicare for All and the Green New Deal to the state-run economy of Venezuela. . . . Undoubtedly, such calls will be a frequent theme of the campaign’s new initiative, as it seeks to boost Trump’s percentage of Florida’s Hispanic vote, of which he won 35 percent last time around — just seven points higher than his overall take of the demographic, despite winning well over half the state’s Cuban voters.


Pence is despicable and his boss is even worse.  Both are little better than human excrement in my view.
Posted by Michael-in-Norfolk at Wednesday, June 26, 2019