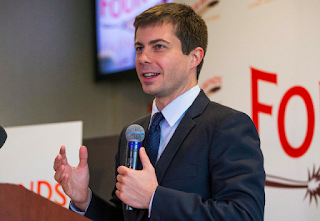 There were a number of standout lines from last night's Democrat presidential candidate debate, but one in particular echoed something this blog has argued for years, namely that the GOP's claims of being a party of those with religious values is a lie.  Both Republicans and their supporters among evangelical Christians are morally bankrupt and have perverted and sullied Christianity. Two things and only two things define one as a Christian Republican: being anti-abortion and being anti-gay. The rest of the bible simply doesn't matter, especially the New Testament call to feed the hungry, welcome the stranger, cloth the naked and care for the sick.  Indeed, the entire GOP platform of destroying the social safety net and showering tax breaks on the obscenely wealthy is the antithesis of what true Christians should support and do in the community.  Last night, Pete Buttigieg called them out.  A piece in The Atlantic looks at this much deserved condemnation.  Like so many others, it falsely describes evangelicals and right wing Catholics as "conservative" rather than what they really are: racist, bigots and modern day Pharisees. Here are highlights:

Pete Buttigieg, the mayor of South Bend, Indiana, called out Republicans for what he described as moral hypocrisy during the second night of the first Democratic presidential debates, in Miami. The conversation had turned to the border, where Donald Trump’s administration has continued to separate families seeking asylum and is detaining children in facilities reportedly without soap or toothbrushes or showers. “For a party that associates itself with Christianity, to say that … God would smile on the division of families at the hands of federal agents, that God would condone putting children in cages,” Buttigieg said, “has lost all claim to ever use religious language again.”

Under Trump, [white supremacist] conservative Christianity has come to be singularly associated with [Trump] the president. White evangelical voters brought him to the White House and continue to give his administration high approval ratings. White Catholics were arguably the swing voters who gave Trump his 2016 victories in states such as Wisconsin and Pennsylvania. And Trump has leaned into this image as the ultimate president for religious voters.

On the debate stage, Buttigieg gave voice to a view that has become common among Democratic voters: Many of Trump’s policies, along with his conduct as president, do not reflect Christian values. “The Republican Party likes to cloak itself in the language of religion,” Buttigieg said. “We should call out hypocrisy when we see it.”

This has been a theme throughout Buttigieg’s campaign. The mayor has spoken openly about his religious faith and rallied religious rhetoric to his advantage: This spring, he called out Mike Pence for his opposition to same-sex marriage, saying, “Your quarrel, sir, it is with my creator.”

This is a departure from the usual playbook for the Democratic Party. As Buttigieg himself pointed out, “Our party doesn’t talk about [religion] as much.” The reason for this, he said, is that Democrats are committed to the separation of Church and state, and that the party wants to stand for all people, regardless of their religion.

Buttigieg’s knack for speaking in the language of God makes him exceptional within his generation, but it may also be a strength in reaching the swing voters and voters of color whom Democrats so badly need. Of all the candidates onstage, he spoke most directly to the anger that many Americans seem to feel at the way religion has been co-opted by the Trump administration, at odds with the faith they deeply hold.

One simply cannot support the GOP agenda and be a true Christian - the two are mutually exclusive.  I am over the feigned and false piety and believe Trump supporting "Christians" need to be called out daily.
Posted by Michael-in-Norfolk at Friday, June 28, 2019