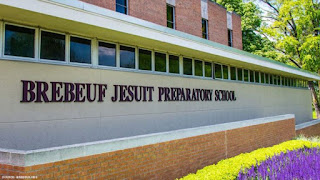 Both the less than saintly Pope John Paul II and his successor, former Hitler youth Pope Benedict XVI stacked bishoprics across the globe with reactionaries who desired to take the Catholic Church backwards in time and keep women subjugated to men and gays stigmatized and marginalized. The Church remains saddled with many of these reactionary bishops and cardinals who seemingly prefer to drive members from the Church than face new scientific and medical knowledge and social enlightenment.  These reactionaries also seek to wage war with the Church's religious orders that do not fall directly under their leadership but instead have their own independent leadership.  One order, the Jesuits, has for centuries been the home of the Church's intellectuals and also the most educated of the Church's religious orders.  Now, this dichotomy within the Church has collided in of all places, Mike Pence's state of Indiana where a Jesuit run high school is defying a reactionary archbishop's order to fire a gay teacher.  NBC News looks at the conflict.  Here are highlights:

A Jesuit-run prep school in Indianapolis is defying a demand by the local archbishop that it fire a veteran teacher who is in a same-sex marriage, prompting the archdiocese to revoke recognition for the school as a Catholic institution.

In a letter to parents, the leaders of the Brebeuf Jesuit Preparatory School said Archbishop Charles Thompson’s “direct insertion into an employment matter of a school governed by a religious order is unprecedented.”

“After long and prayerful consideration, we determined that following the Archdiocese’s directive would not only violate our informed conscience on this particular matter, but also set a concerning precedent for future interference in the school’s operations,” school officials said.

The letter was signed by the school president, the Rev. William Verbryke, and the heads of the board of trustees, W. Patrick Bruen and Daniel M. Lechleiter.

They wrote that for 57 years, school leaders have decided who gets hired.

“Brebeuf Jesuit has respectfully declined the Archdiocese’s insistence and directive that we dismiss a highly capable and qualified teacher due to the teacher being a spouse within a civilly-recognized same-sex marriage,” they said in the letter.

The school leaders reassured parents that their stand “will not change the mission or operations of Brebeuf Jesuit” and insisted that “our identity as a Catholic Jesuit institution remains unchanged.”

“We will continue to offer a rigorous academic program that follows more than 450 years of Jesuit tradition and is committed to expansive and critical thinking, competent and compassionate ethical concern, creative and artistic expression, and excellence grounded in faith and the dignity of the human person,” they wrote.

The Archdiocese of Indianapolis said in a statement that a Catholic school is required to "clearly state in its contracts and ministerial job descriptions that all ministers must convey and be supportive of all teachings of the Catholic Church."

The battle over the gay teacher has been going on for two years.

Brian Paulson, who leads the Society of Jesus Midwest Province, which represents Jesuits in the Midwest, called the archdiocese’s move “disappointing.”

“In the summer of 2017, Brebeuf Jesuit became aware that one of its teachers entered into a civil marriage with a person of the same sex,” Paulson said in a statement. “This fact became publicly known via social media.”  When the archdiocese asked that the teacher’s contract not be renewed, Paulson said the school refused.  “The teacher in question does not teach religion and is a longtime valued employee of the school,” Paulson wrote.

Paulson said they will appeal the archdiocese's decision.

The Rev. James Martin, a Jesuit priest who is one of the leading advocates for LGBT Catholics, called the move by Brebeuf's leadership "courageous."

One of the top private schools in the city, Brebeuf Jesuit serves about 800 students in grades 9-12.

The Catholic Church needs to leave its 12th century dogma on sex and sexuality behind or else, over time, it will find itself a much smaller, Africa centered church.  Kudos to the school leadership for saying "no" to ignorance and bigotry.
Posted by Michael-in-Norfolk at Monday, June 24, 2019