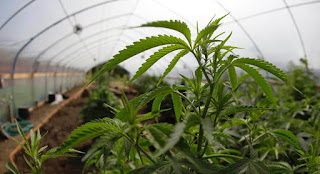 For over a quarter century, Virginia Republicans have used Virginia's criminal justice system to aid in its effort to make voting more difficult, if not impossible, for minorities to vote in Virginia.  Along with voter ID laws disingenuously touted as being needed to prevent non-existent voter fraud, the agenda has been to minimize the minority vote.  Nowhere has this been more true than in the context of Virginia's marijuana laws that are disproportionately enforced against black Virginians who make up 20% of the population, but who are subject to 46-50% of marijuana arrests and convictions.  It's an insidious agenda and morally reprehensible, but such is the nature of today's Republican Party, both in Virginia and in Washington, D.C.  A growing number of Virginians want these laws changed.  Virginia Attorney General Mark Herring has an op-ed in the Daily Press that looks at this continuing shame on Virginia that needs to be rectified.  Here are column excerpts:


Virginia’s policy of criminalizing minor marijuana possession is not working. It is needlessly creating criminals and burdening Virginians with convictions. The human and social costs are enormous, in addition to the millions of dollars it costs Virginia taxpayers. And the negative consequences of the current approach fall disproportionately on African Americans and people of color.

That is why Virginia should decriminalize possession of small amounts of marijuana, address past convictions and start moving toward legal and regulated adult use.

Even if a Virginian avoids jail time for marijuana possession, they can still be stuck with a criminal record, lose their job, student aid, certain public benefits including housing assistance, and it can even affect custody rights.

This punitive approach costs Virginia taxpayers an estimated $81 million every year, in addition to the staggering human and social costs. And it cannot be ignored that the burden of the current system falls disproportionately on African Americans and people of color.

The Virginia Crime Commission found that African Americans comprised 46% of all first offense possession arrests from 2007 to 2016, despite comprising just 20% of Virginia’s population and despite studies consistently showing that marijuana usage rates are comparable between African Americans and white Americans.

So what does a more rational, just, and equitable cannabis policy look like in Virginia? It’s a question that will require thought, consideration, and input from a wide range of stakeholders, but the time is right to begin working toward legal and regulated adult use.

That process should begin as soon as possible with decriminalizing simple possession of small amounts of marijuana and taking action to release from jail, pardon and expunge the records of those whose convictions would not have occurred under more rational standards.

[W]e can’t avoid the conversation any longer, especially when our current system continues to saddle Virginians with convictions and even jail time, and black Virginians at a strikingly disproportionate rate. It is time for Virginia to embrace a better, smarter, and fairer approach to cannabis.

Marijuana reform will be yet another much needed legislative issue that can move forward if Democrats win control of the General Assembly in November, 2019.  So much reform is needed in so many areas of Virginia's laws that will only happen when the GOP is sent into a minority position (hopefully, permanently).
Posted by Michael-in-Norfolk at Sunday, June 16, 2019