Franklin Graham: The Evangelical, the ‘Pool Boy,’ and Michael Cohen 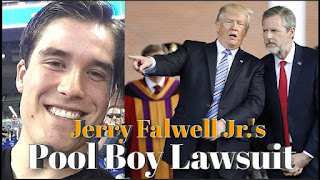 Some time back I did a post about a potentially severely damaging story involving Jerry Falwell Jr., a Donald Trump sycophant, major scamvangelist, in my opinion, and head of Liberty University, in Lynchburg, Virginia, a blight on Virginia only rivaled by Pat Robertson's Regent University in Virginia Beach. In the post, reference was made to a seemingly bizarre relationship between Mr. Falwell and his wife and a very attractive 21 year old Florida pool boy.  The story back then involved the issue of "compromising photos" of Falwell and his wife and a seemingly incomprehensible loan made by the Falwells to the pool boy. Much to Falwell's likely outrage, the story has not gone away and now the New York Times has a very long article looking at the the connections between the pool boy, the alleged photos and Falwell's contacts with Michael Cohen, Donald Trump's former fixer, and Falwell's decision to endorse Trump in 2016 rather than Ted Cruz.  Suffice it to say that, despite Falwell's denials, something doesn't add up and one is left wondering when the photos or the rest of the story may emerge. Here are article highlights:


MIAMI BEACH — Senator Ted Cruz was running neck and neck with Donald J. Trump in Iowa just before the caucuses in 2016, but his campaign was expecting a last-minute boost from a powerful endorser, Jerry Falwell Jr.

Mr. Falwell was chancellor of one of the nation’s largest Christian colleges, Liberty University, and a son of the Rev. Jerry Falwell Sr., the televangelist and co-founder of the modern religious right.

But when the time came for an announcement, Mr. Falwell rocked the Cruz campaign and grabbed the attention of the entire political world. He endorsed Mr. Trump instead, becoming one of the first major evangelical leaders to get behind the thrice-married, insult-hurling real estate mogul’s long-odds presidential bid.

Mr. Falwell — who is not a minister and spent years as a lawyer and real estate developer — said his endorsement was based on Mr. Trump’s business experience and leadership qualities. A person close to Mr. Falwell said he made his decision after “consultation with other individuals whose opinions he respects.” But a far more complicated narrative is emerging about the behind-the-scenes maneuvering in the months before that important endorsement.

That backstory, in true Trump-tabloid fashion, features the friendship between Mr. Falwell, his wife and a former pool attendant at the Fontainebleau hotel in Miami Beach; the family’s investment in a gay-friendly youth hostel; purported sexually revealing photographs involving the Falwells; and an attempted hush-money arrangement engineered by the president’s former fixer, Michael Cohen.

The revelations have arisen from a lawsuit filed against the Falwells in Florida; the investigation into Mr. Cohen by federal prosecutors in New York; and the gonzo-style tactics of the comedian and actor Tom Arnold.

Mr. Arnold befriended Mr. Cohen — who had lately become a vivid, if not entirely reliable, narrator of the Trump phenomenon — and then surreptitiously recorded him describing his effort to buy and bury embarrassing photographs involving the Falwells.

[T]he new details — some of which have been reported by news outlets including BuzzFeed and Reuters over the last year — show how deeply Mr. Falwell was enmeshed in Mr. Cohen’s and Mr. Trump’s world.

And they add another layer to one of the enduring curiosities of the Trump era: the support the president has received from evangelical Christians, who have traditionally demanded that their political leaders exhibit “family values” and moral “character.” Mr. Falwell’s father forged those words into weapons against the Democrats after he co-founded the Moral Majority political movement

Three years later, Mr. Falwell remains an unwavering Trump supporter. Last month he went so far as to suggest that the president deserved an extended term as “reparations” for time lost to the Mueller investigation. In turn, he has had entree to the White House, providing input on education policies that stand to benefit Liberty.

Mr. Falwell began to grow close to Mr. Trump and Mr. Cohen after Mr. Trump came to speak at Liberty, in Lynchburg, Va., in 2012. Mr. Cohen, who was working to connect his boss with important political constituencies and their leaders for a possible presidential run four years later, came along for the trip.

Mr. Trump lacked the religious bona fides of those who typically filled the school’s speaker lineup. But he was the star of the top-rated “Apprentice” reality show, and Mr. Falwell admired his career in real estate.  As it happened, the Falwell family was exploring a real estate venture of its own.

Earlier that year, Mr. Falwell and his wife, Becki, had stayed at the Fontainebleau — the grande dame of the Miami Beach hotel scene and a somewhat unlikely vacation spot for the chancellor of a university whose student code prohibited short skirts, coed dorm visits and sex outside of “biblically ordained” marriage.

Once a glamorous hangout for John F. Kennedy, Frank Sinatra and Elvis, the Fontainebleau was now the stomping grounds of the Kardashians, Paris Hilton and Lady Gaga, known for allowing topless sunbathing and for a cavernous nightclub that one travel guide described as “30,000 square feet of unadulterated fun.” Techno music was pumped out at its 11 pools, where waitresses in polka-dot swimsuits served drinks and white-uniformed male attendants brought fresh towels and positioned umbrellas for tips.

The Falwells struck up a conversation with one of those pool attendants, Giancarlo Granda. Mr. Granda, then 21 and the son of immigrants from Cuba and Mexico, was working at the hotel while studying finance at Florida International University. . . . Soon he was hiking and water skiing with them in Virginia. Within months, they were offering to help him get started in business in Florida.

Together, they directed Mr. Granda to a South Beach youth hostel that was for sale. The building also housed a restaurant and a liquor store. . . . In 2013, the Falwells completed the deal for the Miami Hostel, which rents beds for as little as $15 a night, bunking 12 people to a room. The hostel became known as one of South Beach’s best budget party hostels and is sometimes listed as gay-friendly. . . . . Tourism pamphlets included one for Tootsie’s Cabaret, “74,000 square feet of adult entertainment and FULL NUDITY.”

Real estate records show that an LLC called Alton Hostel Inc. bought the hostel and its building for $4.7 million in cash. Within weeks, Alton Hostel secured a $3.8 million mortgage from Carter Bank & Trust, the Virginia-based bank the Falwells had long used to finance and expand Liberty University. The source of Alton Hostel’s initial full-cash payment is not known. But Mr. Falwell would later say in a sworn affidavit that his family’s financial contribution to the deal amounted to a loan of $1.8 million, including $800,000 for renovations. The Falwells’ son Jerry Falwell III, who goes by “Trey” and was 23 at the time, was listed as manager of the LLC; Mr. Granda was added later as a co-manager. In his affidavit, Mr. Falwell said his wife was also a member of the LLC.

By late 2015, the lawsuit over ownership of the hostel had devolved into a fight over compromising photos, according to several people involved in the case. It was understood that between Mr. Granda, the Fernandezes and their lawyers, one or more people were in possession of photographs that could be used as leverage against the Falwells.

And so Mr. Cohen tried to play the fixer for his friends.

In a recent legal filing, Mr. Fernandez Jr. said he was forced to change his name because of the case. He became Gordon Bello. His father, Mr. Fernandez, Sr., became Jett Bello. Their name changes took place after Mr. Cohen intervened.

Mr. Cohen described his involvement in his conversation with Mr. Arnold, which was first reported last month by Reuters.

“There’s a bunch of photographs, personal photographs, that somehow the guy ended up getting — whether it was off of Jerry’s phone or somehow maybe it got AirDropped or whatever the hell the whole thing was,” Mr. Cohen told Mr. Arnold in the recording, which Mr. Arnold shared with The Times. Mr. Cohen never identified “the guy.”

“These are photos between husband and wife,” Mr. Cohen added, joking that “the evangelicals are kinkier than Tom Arnold.” He explained, “I was going to pay him, and I was going to get the negatives and do an agreement where they turn over all the technology that has the photographs or anything like that, any copies.”

With a few weeks to go before the Iowa caucuses kicked off the primary season on Feb. 1, 2016, Mr. Cruz was steadily racking up high-level endorsements. He was banking on strong evangelical support to push him past Mr. Trump in the state.

Signs that something was amiss came shortly afterward, when Mr. Trump arrived at Liberty for another speech. Mr. Falwell introduced Mr. Trump as a man who “lives a life of loving and helping others as Jesus taught.” Despite the generous introduction, the appearance seemed an unmitigated disaster for Mr. Trump. . . . A few days later, Mr. Falwell announced his endorsement of Mr. Trump, calling him “a successful executive and entrepreneur, a wonderful father and a man who I believe can lead our country to greatness again.”

Meanwhile, rank and file evangelicals continue their blind support of Trump and Falwell. No wonder Millennials are fleeing religion.
Posted by Michael-in-Norfolk at Tuesday, June 18, 2019