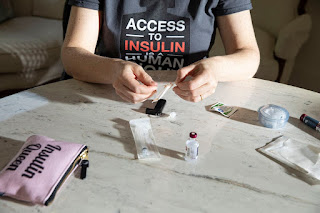 The myth continues that America has the best health care in the world.  To the extent this myth is true, it applies only to the very wealthy to whom cost is no obstacle. For millions of other Americans, even those with insurance, the system remains severely broken and remains a drive force in pushing individuals into bankruptcy.  Even if one does not need surgery or an extended hospital stay, prescription drug costs are sky high, often even for generic brands - I recently paid $545.00 for a generic drug that I need to deal with side effects of my proton therapy AFTER my insurance company made its co-pay.  Unlike so many others, I fortunately will not need to keep getting refills.  In the case of insulin, those who need it, need it it on a continuing basis and American pharmaceutical companies are proving to be rapacious at best.   Meanwhile, the federal government does nothing to bring down costs.  As a piece in the Washington Post reports, some Americans now travel to Canada to get insulin at one tenth (1/10th) the cost paid in the USA.  Here are highlights:


As their minivan rolled north, they felt their nerves kick in — but they kept on driving.  At the wheel: Lija Greenseid, a rule-abiding Minnesota mom steering her Mazda5 on a cross-border drug run.

Her daughter, who is 13, has Type 1 diabetes and needs insulin. In the United States, it can cost hundreds of dollars per vial. In Canada, you can buy it without a prescription for a tenth of that price.

So, Greenseid led a small caravan last month to the town of Fort Frances, Ontario, where she and five other Americans paid about $1,200 for drugs that would have cost them $12,000 in the United States.  “It felt like we were robbing the pharmacy,” said Quinn Nystrom, a Type 1 diabetic who joined the caravan that day. “It had been years since I had 10 vials in my hands.”

Like millions of Americans, Greenseid and Nystrom are stressed and outraged by the rising costs of prescription drugs in the United States — a problem Republicans and Democrats alike have promised to fix.

Insulin is a big part of the challenge. More than 30 million Americans have diabetes, according to the American Diabetes Association. About 7.5 million, including 1.5 million with Type 1 diabetes, rely on insulin.

Between 2012 and 2016, the cost of insulin for treating Type 1 diabetes nearly doubled, according to the nonprofit Health Care Cost Institute.

Some pharmaceutical companies, under pressure from U.S. lawmakers, have tried to reduce the cost for some patients. But many who rely on insulin still struggle. Large numbers resort to rationing — a dangerous and sometimes deadly practice.

Some diabetics and their families are taking matters into their own hands. They meet in coffee shops and strip mall parking lots to exchange emergency supplies. An unknown number travel outside the country to buy the lifesaving drug for less.

None of this is recommended by U.S. officials, and some of it might be illegal under Food and Drug Administration guidelines. But the organizers of the caravan — their word, a nod to the migrants traveling in groups through Mexico to the U.S. border — are speaking out about their trip because they want Americans to see how drug prices push ordinary people to extremes.

“When you have a bad health-care system, it makes good people feel like outlaws,” Greenseid said.

Barry Power, director of therapeutic content with the Canadian Pharmacists Association, said the group is tracking both U.S. drug-buying proposals and reports of cross-border trade closely but has yet to see a disruption to Canadian insulin supplies.

He said insulin prices in Canada are controlled through policy, including price caps and negotiations with manufacturers.  “This is something the U.S. could do,” he said.

Elizabeth Pfiester is founder and executive director of T1International, a British-based nonprofit that advocates for people with Type 1 diabetes around the world.

“It’s kind of a myth that America has the best health-care system in the world, because it is set up to allow Americans to go bankrupt or die because they can’t afford their medicine,” she said.

Pfiester grew up in the United States. One of the reasons her organization is based overseas, she said, is that the cost of treating her diabetes in the United States is so high.
They see buying in Canada as a short-term emergency measure and a way to call attention to U.S. pricing — not the answer.

“I don’t think that the solution is going outside the United States,” Greenseid said. “The reason they have lower prices is because they have put in regulations to make sure their citizens are not paying too much. We have not yet made that decision in the U.S.”

LaShawn McIver is senior vice president for government affairs and advocacy at the American Diabetes Association.  “Insulin is not a luxury, it is a matter of life and death,” she wrote in an emailed statement. “Action to reduce the high out-of-pocket costs that endanger the lives of the millions of Americans who depend on this medication is critical and urgently needed.”