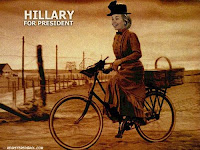 I have already voiced my views on Hillary Clinton's hypocrisy in terms of continuing to resist releasing her tax returns. Now, hypocrisy is being comingled with out right disingenuousness. We are not talking about just her refusal to release her 2007 returns which she is making people think are not yet completed. No, we are talking about returns 2001 through 2006 as well. John Aravosis at America Blog describes the situation well in these highlights (http://www.americablog.com/2008/03/media-dont-get-bamboozled-over-tax.html):
In addition, Hillary's staff keeps saying that her returns will be released at the "customary" time, around April 15. Well, yes, that's the customary time for THIS year's taxes to be finished. But this April 15 is not the customary time to complete your taxes for 2001, 2002, 2003, 2004, 2005, and 2006, unless you're Leona Helmsley. Hillary's tax returns for those years were completed April 15 years ago, they've never been released, and a simple visit to a Kinkos can get them out to the public right now. Cute answers implying that we're simply talking about this year's returns won't cut it. And it's troublesome that the campaign is trying to confuse the public with their answers. No one can explain why she won't release the papers now.
If one has nothing to hide, they do not act like this. I can only surmise that there is something in the tax returns that she does NOT want primary voters to see.
Posted by Michael-in-Norfolk at Thursday, March 06, 2008