Why Conservatives Hate the 1619 Project 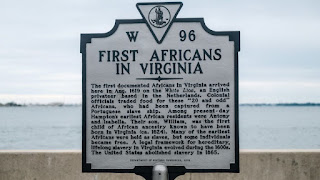 The 1619 Project which "aims to reframe the country's history by placing the consequences of slavery and the contributions of black Americans at the very center of the United States' national narrative" reverberates here in Hampton, Virginia since the point where the first Africans imported as slaves occurred roughly two miles as the crow flies from where I sit this moment.  The image at left is a photo of the historic marker at the site at what is now the Fort Monroe historical monument at Point Comfort.  It is impossible to separate Virginia's early history from slavery which supported the wealthy planter society that controlled the state. The same applies to much of the rest of the South where slave labor was a keystone to the economy and motivated many government actions - e.g., the forced removal of the Cherokee and other Native American tribe in Georgia and Alabama to west of the Mississippi River was to open more lands to slave based plantations. A truthful view of history unfortunately, often threatens those who prefer to ignore the sins of the past and horrors that were deliberately inflicted on others. For the political right, an honest presentation of America's often ugly history is dangerous because it threatens the myths the right seeks to perpetuate. It also undermines the right's preferred narrative that racial and economic inequalities are driven by differences in effort and ability, not a systemic stacking of the deck.  A piece in The Atlantic looks at why the political/social right hates the 1619 Project.  Here are excerpts:

Nikole Hannah-Jones is an award-winning Black journalist. She is also one of the developers of the 1619 Project, a journalistic examination of slavery’s role in shaping the American present. Last year, that work won her a Pulitzer Prize. Now it appears to have cost her a tenured chair at the University of North Carolina’s Hussman School of Journalism.

The news outlet NC Policy Watch reported on Monday that the university’s dean, chancellor, and faculty had backed Hannah-Jones’s appointment to the Knight Chair in Race and Investigative Journalism, a tenured professorship, after a “rigorous tenure process at UNC.” But in an extraordinary move, the board of trustees declined to act on that recommendation. Hannah-Jones was instead offered a five-year, nontenured appointment following public and private pressure from conservatives. . . . . One anonymous trustee told NC Policy Watch that “the political environment made granting Hannah-Jones tenure difficult, if not impossible.”

For the past five years, conservatives have been howling about the alleged censoriousness of the American left, in particular on college campuses. But the denial of tenure to Hannah-Jones shows that the real conflict is over how American society understands its present inequalities.

The prevailing conservative view is that America’s racial and economic inequalities are driven by differences in effort and ability. The work of Hannah-Jones and others suggests instead that present-day inequalities have been shaped by deliberate political and policy choices. What appears to be an argument about reexamining history is also an argument about ideology—a defense of the legitimacy of the existing social order against an account of its historical origins that suggests different policy choices could produce a more equitable society.

The 1619 Project is a particularly powerful part—but not the cause—of a Black Lives Matter–inspired reevaluation of American history that began in the waning years of the Obama administration. Many Americans were struggling to understand how a nation that had elected a Black president could retain deep racial disparities not only in the rate of poverty, access to education, and health care, but also in matters of criminal justice and political power.

[T]he 1619 Project has its flaws—although fewer than its most fanatical critics would admit. But the details of its factual narrative were not what conservatives found most objectionable. Rather, they took issue with the ideological implications of its central conceit: that America’s true founding moment was the arrival of African slaves on America’s shores.

The idea that ugly aspects of American history should not be taught, for fear that students—white students in particular—might draw unfavorable conclusions about America, is simply an argument against teaching history at all.

In truth, the animating premise of the 1619 Project is more threatening to the right—the idea that America can indeed be redeemed, by rectifying racial imbalances created by government policy.

The fight to define the American past is not new. In the middle of the 20th century, a massive conservative backlash erupted in California against a textbook co-written by the celebrated Black American historian John Hope Franklin.

The tone of the textbook Franklin co-authored, Land of the Free, remained “resolutely patriotic,” as Joseph Moreau wrote in his account of the conflict in his book Schoolbook Nation. But this was not sufficient for the textbook’s opponents, who, Moreau wrote, believed that “history teaching existed to cultivate patriotism” and that the “debunking of historical myths or premature attempts to furnish young people with painful truths could not be countenanced.” Anxiety over the civil-rights movement, and this reevaluation of American history, fueled a white backlash against the textbook, and rewarded conservative politicians willing to exploit that sentiment. Franklin’s history was closer to the truth than the version his opponents wanted to promote—but the accuracy of the history was beside the point.

Good intentions do not a good idea make. But to accept that a problem exists is to accept the obligation to find a solution. And conservatives who don’t want to address America’s deep racial disparities are attempting to suppress any reading of history that suggests contemporary inequalities are the product of deliberate choices.

To that end, conservative opponents of what they derisively refer to as “wokeism” are engaged in a campaign to stigmatize such arguments, and where they can, use the state to purge them from the educational system. State legislatures are outlawing the teaching of “critical race theory” which in this context as my colleague Adam Harris reports, is ultimately a shorthand for “anything resembling an examination of America’s history with race.” The Trump administration threatened to investigate institutions of higher education that discussed systemic racism, and conservative state governments are interfering with state institutions of higher education.

In Texas, legislators are seeking to ban the teaching of the 1619 Project, and suppress the role of slavery in the state’s independence. The 1836 constitution of the Republic of Texas not only protected slavery, but also barred slave owners from emancipating the enslaved and denied “Africans, the descendants of Africans, and Indians” the ability to become citizens. The state government is seeking to prevent exhibits at the Alamo from “explaining that major figures in the Texas Revolution were slave owners.” As with the Trump White House’s “1776 Commission,” whose report reads like a Twitter thread from a cocaine-addled right-wing Wikipedia obsessive, the objective here is not a more accurate history but one that justifies the present economic and racial hierarchy, and offers conservatives, as Moreau put it in his book, a “comforting alternative to the burdens of the past.”

In the specific case of Hannah-Jones and UNC, the objective is to intimidate those who might share her views by showing that such views could cost them a job. . . . The traditional argument between American liberals and conservatives is over what problems the state can or should remedy; the position of the Trumpist GOP is that the state is an instrument for destroying your enemies—by which its members simply mean Americans who disagree with them.

[T]he same people who insist that harsh criticism of their ideas or behavior is a form of censorship are also highly engaged in using the state to suppress speech, on the grounds that the ideas they oppose are too dangerous to be allowed the usual protections.

The historical record shows that efforts to use the power of the state to settle an argument usually fail, although they can be successful for a time. The irony is that these awakenings about the truths of American history are the result of people attempting to warp the facts into a narrative that reassures them of their essential virtue, and subsequent generations discovering that what they were taught was but a bedtime story. These attempts to use the state to suppress ugly realities about the past are merely setting the stage for the next awakening.