Hope for the Indictment and Trial of Trump 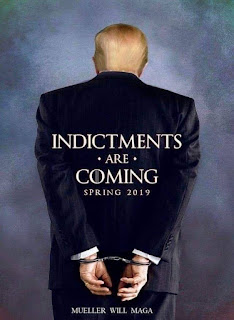 Donald Trump and his supporters remain a cancer on America and the majority of Republicans continue to show that they are willing to jettison the truth as well as democracy in order to remain in the sociopath's/would  autocrat's good graces - or at least to avoid a primary challenge.  If Republicans refuse to save the country, then we may have to hope that Trump (and with luck his children) are criminally indicted and put on trial.  The true Trump Kool-Aid drinkers would no doubt believe indictments of Trump were a "deep state" plot, but many in the middle might be forced to finally face the reality that Trump is little more than a mob boss with no concern for anyone but himself. One can only hope that the State of New York and the Manhattan District Attorney's office both bring indictments against Trump.  A piece in The Atlantic looks at the current situation.  Here are highlights:

Yesterday evening, New York State’s attorney general, Letitia James, announced, “We have informed the Trump Organization that … We are now actively investigating the Trump Organization in a criminal capacity.” According to The New York Times, James will be sending two of her office’s prosecutors to join the team of Cyrus Vance Jr., the Manhattan DA. With this news, Donald Trump, those around him, and the country as a whole inch closer to the prospect that a former president could face criminal charges, and possibly even prison time. The country has not been through anything like this before.

The ongoing investigation is sweeping. James began it as a civil investigation following the 2019 congressional testimony of Trump’s former attorney, Michael Cohen, that the Trump Organization had lied about the value of its assets in order to secure loans and insurance and to reduce its tax liability. Her focus includes the Trump Organization’s valuation of Seven Springs, a 213-acre estate in Westchester County, which it used to claim a $21.1 million tax deduction for a conservation easement on the property in 2015. James is also looking into a $160 million loan on a property at 40 Wall Street in Manhattan, which Trump personally guaranteed for $20 million, as well as “large portions of debt owed by the Trump Organization” relating to the Trump International Hotel and Tower, in Chicago, that were claimed as taxable income, and the valuation of Trump National Golf Club, in Los Angeles.

By law, grand juries operate in secret, but it’s publicly known that Vance has also subpoenaed Mazars USA LLP, Trump’s personal accounting firm, for financial records relating to the former president and his businesses. In July 2020, the Supreme Court rejected a bid to protect those records from disclosure on presidential-immunity grounds, and Vance finally obtained Trump’s returns in February of this year. Vance’s office has reportedly interviewed Cohen at least eight times, and Cohen has stated that: “Unfortunately for Trump, I have backed up each and every question posed by the district attorney’s office” with “documentary evidence.”

Vance has also sought records from two of Trump’s largest creditors, Deutsche Bank AG and Ladder Capital Corp, and from Columbia Grammar & Preparatory School, which is attended by the grandchildren of the Trump Organization’s CEO, Allen Weisselberg, who has worked for the Trump family since 1973.

Only criminal charges can produce jail time. Although indictments can be filed against corporations—which the Department of Justice has deemed “‘legal persons’ … capable of committing crimes” and “criminally liable for the illegal acts of its directors, officers, employees, and agents”—corporations can’t go to jail.

Nonetheless, individual corporate officers can be charged along with a corporation. This is where Trump, his top affiliates, and his family are all in potential trouble. Trump’s tax counsel in 2016 described him as “the sole or principal owner in approximately 500 separate entities [that] do business as The Trump Organization.” It’s hard to imagine a scenario in which none of this comes back to Trump himself.

Whether the joint efforts of the Manhattan DA and the New York State AG will lead to indictments is unknowable at this point, but the matter is clearly ramping up. One question of late is whether either jurisdiction could force Trump to appear in New York in the event that he is criminally charged . . . ultimately the state of New York can go to court and get an order to extradite the former president.” In fact, this is a rare circumstance in which the Constitution is quite explicit regarding a governor’s obligation to respect an extradition request from another state: Article IV, Section 2 provides that “a person charged in any state with treason, felony, or other crime … shall on demand of the executive authority of the state from which he fled, be delivered up, to be removed to the state having jurisdiction of the crime.”

Now his own criminal and civil liability, as well as that of his businesses, his staff, and his children, are squarely within the sights of the rule of law. Former Senate Majority Leader Mitch McConnell put it plainly in his remarkable speech justifying his vote to acquit Trump for his role in the January 6 insurrection at the United States Capitol: “We have a criminal justice system in this country. We have civil litigation. And former presidents are not immune from being held accountable by either one.”

I have been told his desperation about getting reelected stem from his worry that this would happen.
Now it's happened and I am really hoping that they nail his corrupt orange ass.
Follow the money, they say. And there's plenty to follow here.