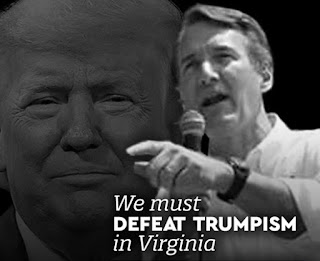 Suddenly, with the GOP nomination in his pocket, Glenn Youngkin is trying to rewrite history and pretend he is someone other than his true self, apparently believing Virginia's are either too stupid or have memory loss as to who Youngkin is in fact.  Why? Because the real Youngkin is a Trump supporting darling of Christofascists and extremists.  Between now and the November election the task for Democrats will be to keep exposing the real Youngkin and reminding voters of who he has sworn fealty. As the election contest heats up, Virginians need to remember how Youngkin secured his nomination, namely through a convention as opposed to a primary.  This selection mechanism empowers the most extreme elements of the party base to hold disproportionate power in selecting the candidates.  Youngkin also won 61% support from Christofascist elements including the vitriolically anti-gay Family Foundation  Whatever Youngkin's act may be over the coming months, it must be remembered that it is all an act to dupe Virginia voters.  A piece in the Washington Post looks at Youngkin's effort to erase his true identity and position on issues.  Here are highlights:

The reboot began once Glenn Youngkin snagged the Republican nomination for Virginia governor.

A video of former president Donald Trump praising the former Carlyle Group executive by name for helping with a China trade deal disappeared from Youngkin’s YouTube page. Days later, Youngkin was on TV publicly acknowledging that Joe Biden was the nation’s duly elected president — something he’d studiously avoided saying over the previous five months as he wooed Trump supporters.

At the same time, Democrats — still a month from their June 8 primary — were doing some adjusting of their own. The Democratic Governors Association, which typically stands by until its party crowns its nominee, launched an online ad tying Youngkin to Trump and the “big lie” that Biden stole the White House. The Democratic Party of Virginia kicked off a “Where Trump Leads, Glenn Follows” rally on Richmond’s Capitol Square, with plans to take it around the state.
The 2021 governor’s race is suddenly at full speed. It’s already clear that this year’s contest — which will help define the national political landscape heading into the 2022 midterm congressional elections — is likely to be a strange, expensive, surprising affair.

Republicans get a one-month head start with a historically diverse ticket chosen in their May 8 convention. Because they don’t yet have a Democrat to run against, they picked one — former governor Terry McAuliffe, who leads in fundraising and polls and is the Bill and Hillary Clinton surrogate the GOP loves to bash.

Democrats, meanwhile, seem set on running against Trump, which is made easier because all the GOP candidates have embraced the former president — but harder because, well, Trump isn’t actually in office or on the ballot.

Whether Trump dominates or disappears from the race could depend on Youngkin’s Republican running mates and Trump himself, who endorsed him the day after his win.

One of Youngkin’s ticket mates could complicate efforts to downplay the connection. Winsome Sears, who bested two better-funded candidates for the lieutenant governor’s nomination, led a national group of Black Trump supporters last year. Her campaign signs featured a photo of herself dressed up as if for church, but armed with an assault rifle.

Youngkin is running on the premise that Democrats, who control the state House and Senate as well as the Executive Mansion, have driven Virginia into a “ditch,” partly with pandemic-era shutdowns of businesses and schools. He also criticizes them for raising taxes and tightening restrictions on guns while loosening them on abortion and voting. He touts his outsider status and expertise as a former executive as strengths.

Gov. Ralph Northam (D), whom the state constitution prohibits from serving back-to-back terms, pushed back on Youngkin’s claim that Virginia has suffered under Democratic leadership. In an interview Thursday, Northam noted that the state has achieved one of the nation’s lowest coronavirus death rates and an economic recovery that saw state revenue increase by a historic 41 percent last month. He also mentioned expanding Medicaid, raises for teachers, gun-control laws, protections for women’s rights, getting schools safely reopened and expanding access to voting.

[H]e’s [Youngkin] aligned himself with the politics of Trump and bringing in folks like Ted Cruz into Virginia. I think he’s going to have a lot to answer for,” Northam said, referring to the U.S. senator from Texas and Trump ally who barnstormed the state with Youngkin just ahead of the GOP convention. Northam, while typically mild-mannered, called Trump a “narcissistic maniac” while running for governor in 2017.

“Virginians have consistently rejected Donald Trump’s politics and policies of fear and division and conspiracy theories, and they’ll do that again this fall. I’m confident in that,” Northam said Thursday.

Taylor, of the Cook Report, said the “big lie” and the resulting riot could resonate with voters, especially in the bluer Washington suburbs, where the local TV news is the national news. But she also said it’s hard to say how much sway it will have by Election Day.

“You have President Trump still focused on this and one of the highest-ranking Republicans in the House ousted this week,” she said, referring to Rep. Liz Cheney (R-Wyo.), who lost her No. 3 leadership slot for rejecting Trump’s unfounded election fraud claims and blaming him for the Capitol insurrection.