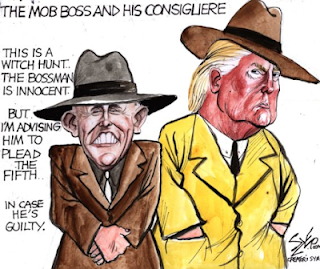 In true crime boss style, Donald Trump summoned the GOP heads of the Michigan Senate and House to the White House where one can only suspect he made threats and/or offered bribes in an effort to get the Republican controlled state legislature to subvert and overthrow the vote of the state's citizens.  Seemingly - and surprisingly since we are talking about Republicans after all - the threats and/or bribes failed to work and the state legislative leaders departed saying they had been presented with nothing that would cause them to alter the state results or to subvert the vote certification process.  Meanwhile, Georgia certified Biden's victory in that state.  One can only imagine Der Trumpenfuhrer's desperation as a new story on a tax fraud investigation (which also involve Ivanka) circulates. Imagine Trump in prison with no spray tan and no $70,000 in hairstyling and government furnished clothing!  A piece in New York Magazine looks at Trump's failed effort to overthrow the Michigan election results.  Here are highlights:

It was Trump’s last real hope to reverse his election defeat. On Friday, the Republican legislative leaders of Michigan, a state won by Biden in which the Trump campaign has made baseless allegations of massive voter fraud, were summoned to the White House to hear the President Trump’s personal plea for intervention. But then, after an eyeball-to-eyeball meeting with the president, state Senate Majority Leader Mike Shirkey and House Speaker Lee Chatfield publicly announced that “we have not yet been made aware of any information that would change the outcome of the election in Michigan, and as legislative leaders we will follow the law and follow the normal process regarding Michigan’s electors, as we have said throughout this election.”

That may seem like a banal statement, but it explodes Trump’s fantasy of overturning his loss to President-elect Biden. Though there have been other efforts by Michigan Republicans to block certification the election outcome, and Shirkey and Chatfield didn’t explicitly affirm Biden’s victory in the state — they made it clear that they would abide by the election results:

Michigan’s certification process should be a deliberate process free from threats and intimidation. Allegations of fraudulent behavior should be taken seriously, thoroughly investigated, and if proven, prosecuted to the full extent of the law. And the candidates who win the most votes win elections and Michigan’s 16 electoral votes. These are simple truths that should provide confidence in our elections.

GOP legislative leaders in two other key states have also declined the opportunity to engage in an electoral coup. As law professor Marjorie Cohn noted Thursday, Republican majority leaders in both Pennsylvania and Wisconsin have previously made it clear that they would not override the will of the voters in their states. Another Trump-targeted state for contesting the election, Arizona, would have to convene a special legislative session to steal the election for him, and won’t. Georgia’s Republican Secretary of State and Governor have certified Biden’s victory in that pivotal state.

A direct presidential appeal to Michigan’s Republican legislators was a last desperate avenue. And it seems to be yet another blind alley.

Posted by Michael-in-Norfolk at Saturday, November 21, 2020