Sanders Plays the Blame Game for His Decline 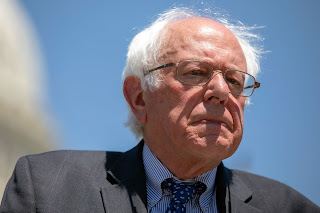 As the returns stand currently from "Super Tuesday 2.0" it appears that Joe Biden is going to subject Bernie Sanders to near across the board defeats.  It will be interesting to see if the youth vote and new voter surge that Sanders has continually predicted failed to materialize yet again. As noted in a prior post, Sanders is Trump-like in that his misfortunes are never of his own making and a group of conspirators is supposedly lurking in the shadows to cause his demise. A column in the New York Times (which is a must read) looks at this phenomenon while another Times column looks at how Sanders has missed key aspects of the Nordic economies that he says he would emulate.  Here are excerpts from the first piece:


To Senator Bernie Sanders, there is plenty of blame to go around when it comes to his recent reversal of fortune. For everyone but him and his campaign.

The “corporate media” didn’t pay attention to his agenda.  The Democratic Party establishment aligned to block him from winning its presidential nomination.

And the young voters he counted on to power his campaign didn’t come through for him.

Political candidates are not generally given to self-criticism. And as Mr. Sanders has seen his fortunes slide after a 30-point South Carolina loss to former Vice President Joseph R. Biden Jr., followed by Mr. Biden’s unexpected strength across Super Tuesday, he has cited a number of factors that portray him as an aggrieved outsider.

It comes at a time of particular weakness for Mr. Sanders. Through 18 states, his theory of the election has not proven true. The surge of new voters in the Democratic primaries has featured mostly older people, moderate suburbanites and African-Americans disinclined to support his campaign.

Mr. Sanders, his team and his supporters have come up with explanations for his loss of momentum that deflect the responsibility onto others.

So when Pete Buttigieg and Senator Amy Klobuchar dropped out of the race and endorsed Mr. Biden, to the Sanders camp it wasn’t because they’d won next to no support from black voters and run out of money, it was part of an establishment plot. And Senators Cory Booker and Kamala Harris were simply joining the effort to block Mr. Sanders when they backed Mr. Biden this week.

Now the Sanders campaign says the policies he’s pitching as a democratic socialist — “Medicare for all,” free public college tuition and other proposals — represent an existential threat to powerful operators that have prompted an unusually coordinated effort to block his rise.

Even among those ideologically inclined to back Mr. Sanders, he has engendered little sympathy in recent days. Adam Jentleson, a close ally of Senator Elizabeth Warren’s campaign — who has not been shy about expressing his own grievances about perceived outside forces that limited her campaign — said Mr. Sanders does himself little good in arguing others are responsible for his shortcomings.

“Blame-shifting is pointless because nobody swoops in and hands you the nomination; you have to win it,” Mr. Jentleson said. “The nominee needs to be the leader of the whole party and Bernie’s job was to convince people he could be that.”

An even more telling column is the second one in the Times that looks at how Sanders' ideology and agenda is not at all in keeping with the economics of Nordic nations like Denmark which are highly capitalistic while having a generous social safety net (paid for by strong capitalism and high taxes).  Here are column highlights:

Bernie Sanders often cites Denmark as the kind of country he would like America to be under his ideology of “democratic socialism.” Well, here’s a news flash: Bernie Sanders, with his hostile attitudes toward free trade, free markets and multinational corporations, probably couldn’t get elected to a municipal council in Denmark today. Ironically, Joe Biden, with his more balanced views on trade, corporations and unions, probably could. And therein lies a column.

I can explain this best by starting with a few questions that I’d love to ask Sanders about his democratic socialism, beginning with the most basic one: Senator Sanders, where do you think jobs come from?

To listen to him (and his surrogates) is to listen to someone who seems to believe that the American economic pie just miraculously appeared and exists on its own. He never discusses where that pie came from, how to bake it or how to enlarge it. His only interest is how to redivide it.

Third, Senator Sanders, do you believe the free enterprise system is the best means for growing jobs, the economy and opportunity — or do you believe in more socialist central planning? I ask because I have often heard you praise Scandinavian countries, like Denmark, as exemplars of democratic socialism. Have you ever been to Denmark? It’s democratic but not socialist.

Denmark is actually a hypercompetitive, wide-open, market economy devoted to free trade and expanding globalization, since trade — exports and imports — makes up roughly half of Denmark’s G.D.P.

Indeed, Denmark’s 5.8 million people have produced some of the most globally competitive multinationals in the world, by the names of A.P. Moller-Maersk, Danske Bank, Novo Nordisk, Carlsberg Group, Vestas, Coloplast, the Lego Group and Novozymes. These are the very giant multinationals Sanders constantly rails against.

The Nordic model is an expanded welfare state, which provides a high level of security for its citizens, but it is also a successful market economy with much freedom to pursue your dreams and live your life as you wish.”

It is through these engines of capitalism, free trade, economic openness and globalization that Denmark has managed to become wealthy enough to afford the social safety net that Sanders rightly admires — as do I: access for all to child care, medical and parental leave from work, tuition-free college, a living stipend, universal health care and generous pensions.

But there is nothing free about these services. According to Investopedia, Denmark’s progressive income tax tops out at 55.8 percent, and the average individual pays 45 percent.

In short, Sanders cherry-picks Denmark. He stresses what he loves — all that the Danish state provides — and then he ignores two things: one obvious and important and one less obvious and even more important.

The obvious and important one is the relentlessly entrepreneurial capitalism that generates Denmark’s prosperity and that is celebrated there. The less obvious, but more important, feature of Denmark’s success is the high-trust social compact among its business community, labor unions, social entrepreneurs and government. That’s the real secret of Denmark’s sauce.

Obviously, in a small, largely homogeneous country of 5.8 million people, it is a lot easier to generate that kind of social trust than in a diverse nation of 327 million. But the point is, no one was demonizing others as “corrupt” by the very fact of who they were — whether labor organizer or corporate titan or someone of wealth.

They understood that it was the balancing of all their interests that made Denmark’s economic growth and generous social safety net possible.

This reality is lost on Sanders and his followers.
Posted by Michael-in-Norfolk at Wednesday, March 11, 2020