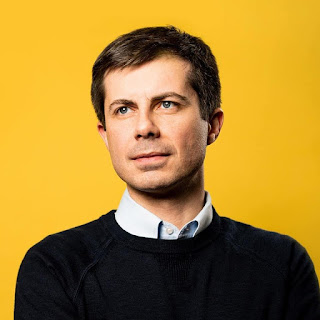 Growing up as a closeted gay child and then youth I - and so many others - had no role model of what a successful and accepted gay person could be.  I was raised in a Church which - hypocritically as it turned out - condemned homosexuality even as larger society ostracized gays and fears for one's career and physical safety were common.  My coming out journey was extremely difficult and included two suicide attempts.  Fast forward to 2020 and Pete Buttigieg has provided a role model and a sense of what is possible for countless LGBT youth, particularly those growing up in backward red states.  In some cases they may need to wait and flee once they reach the age of legal majority to follow their dreams, but Buttigieg has shown them that it can be done - even in a place like South Bend. The irony is that some far left gays continue to whine that Buttigieg "isn't gay enough" or isn't "the right kind of gay," but Mayor Pete has done what many of these preening self-styled "leaders" of the LGBT community have failed to do: set a role model and provide a sense of hope.  A piece in CNN looks at Mayor Pete's contribution.  Here are article highlights:

As Pete Buttigieg's husband addressed an audience of campaign supporters, family and friends gathered here in South Bend late Monday night, he told those gathered that, when his husband, their mayor, first asked what he thought about a presidential run, he laughed. And then he reflected on their still-young marriage.

"Pete got me to fall in love with myself again," Chasten Buttigieg reflected. "And I told Pete to run, because I knew there were other kids sitting out there in this country, who needed to believe in themselves too."

"You changed lives!" a supporter shouted.

"Yes, we did," Buttigieg replied, getting choked up. "Together."

And then, for the first time in American history, a presidential candidate took the stage, kissed his husband and ended his campaign.The moment was a fitting coda to Pete Buttigieg's historic campaign, one that both tested the nation's still evolving acceptance of LGBTQ Americans and represented a giant leap forward in the eyes of scores of those inspired by Buttigieg's candidacy.

[F]or LGBTQ Americans, who only nationally gained the right to marry in 2015 and still face the threat of workplace discrimination for their sexual orientation or gender identity, Buttigieg was more than a longshot candidate from a mid-level midwestern city -- he was a presidential contender of their very own.

From the start, Buttigieg's sexual orientation and faith set him apart from the standard Democratic presidential hopeful -- and especially his ability to square the two seemingly contradictory aspects of his identity.

At a CNN town hall in March 2019, he addressed both, creating a national moment largely credited with catapulting the mayor from obscurity to ubiquity.

During the town hall, Buttigieg, an Episcopalian, tore into Vice President Mike Pence for tying his conservative views on same-sex marriage to his faith.

That answer, and the rest of his town hall performance, caught fire, earning him praise from across the political spectrum . . . . .But Buttigieg's momentum surprised gay voters the most -- voters like Robert Moore of Dallas, Texas.

"Remember, marriage equality came pretty recently, you know, and it's a big jump from we can get married and be private citizens and be on our own, to being president of the United States," Moore told CNN in February. "And this is somebody that they are wanting to embrace, and not just embrace, but put up to lead them? That's a whole different game."

Perhaps more significantly, it signaled a new way to counter arguments against LGBTQ equality from the religious right -- with an appeal equally grounded in religion from the left.But Buttigieg's appeal to moderates on religion would prove representative of a larger theme throughout his campaign.

In attempting to expand the Democratic Party tent to independents and Republicans fleeing Trump, Buttigieg enraged a vocal, progressive wing of the Democratic base, who accused the mayor of compromising party ideals for votes in purple states.The anti-Buttigieg sentiment in the LGBTQ community also rankled Buttigieg's gay supporters.

"They're demanding too much," said Jerry Birdwell, a Texas voter who traveled to New Hampshire to observe the primary process there last month. "I personally think that if they make a comment like that, he's not gay enough, so to speak -- that's absurd...we're looking for a man that's going to represent the country, and he is the type of person who, his sexuality has nothing to do with his ability to run a campaign and to serve."Before thousands of Iowa Democrats, he drew a direct line between the case for a Buttigieg presidency and his own LGBTQ experience.

"I have seen what America can do, and so have you. After all, you're looking at someone who, as a young man growing up, wondered if something deep inside of him meant that he would forever be an outsider, would never wear the uniform, never be accepted, never know love," Buttigieg said. "And now you are looking at that same young man, a veteran, a mayor, happily married, asking for you to vote for president of the United States."

On the trail, Buttigieg took care to always note that while the LGBTQ community has made strides, there remained a great deal of work left to do. And he didn't gloss over that truth either, especially in Iowa, where, a week before the caucuses, he confessed that while he was "obviously thrilled by the progress that brought me the right to marry," the idea that marriage equality "meant the struggle for equality was, you know, done" is "just not true."Former US Rep Barney Frank, the first member of Congress in a same-sex marriage, agrees with Buttigieg's view, but thinks history will view Buttigieg's unsuccessful bid for president as historic in its own right.

"It's one of the most important moments in American history, not just of the LGBT issues," Frank told CNN in an interview after Buttigieg ended his campaign. "It is a sign that the prejudice against sexual minorities has diminished even more than we had thought. ... It further advances the fight against prejudice, because he was so good at it, being so articulate and doing as well as he did.""I never thought we'd have a gay candidate for president in our lifetime, no," said Paul King, who attended Buttigieg's rally in Raleigh, North Carolina with his husband, J.D. Brickhouse, just one day before Buttigieg would drop out of the race. "But I never thought we'd have civil rights in our lifetime either. It means a lot. Nobody who hasn't experienced growing up gay in America would understand how much that means."

What does it mean? I'm having the chance to vote for a gay man for president," Brickhouse chimed in bluntly.

For Annise Parker of the LGBTQ Victory Fund, which seeks to elect LGBTQ candidates up and down the ballot, Buttigieg's candidacy filled a more urgent need."I believe that he literally saved lives," Parker, president and CEO of the group, told CNN Thursday.

"We still have a horrible problem with internalized homophobia and suicide, leading to suicide within our community, and by seeing Pete there doing so well and speaking directly to disenfranchised young people, I know he had an outsized impact for them. I know what all of our candidates and elected officials do for younger LGBT people and how they provide hope, how they provide inspiration. He did that on steroids."

Buttigieg's run also afforded LGBTQ Americans a once unimaginable national visibility. And 9-year-old Zachary Ro of Lone Tree, Colorado, used his one chance to ask Buttigieg a question to enlist the former mayor's help in coming out to the world."Thank you for being so brave," Ro wrote in a submitted question before a Denver rally in February. "Would you help me tell the world I'm gay too? I want to be brave like you."Later at the rally, as Ro approached the stage, the crowd of hundreds whipped themselves into a frenzy of cheers and encouragement, high-fiving the boy and chanting, "Love is love!"

"You will never know who's taking their lead from you, who's watching you and deciding that they can be a little braver, because you have been brave," Buttigieg told the 9-year old, visibly moved. "When I was trying to figure out who I was, I was afraid that who I was might mean that I could never make a difference. And what wound up happening instead, is that it's a huge part of the difference I get to make.""You'll never know whose life you might be affecting right now, just by standing here," he said. "There's a lot of power in that."

I completely agree. For the better.

And things are changing. Slowly, but surely. Yay to that! :)

His talk with Zachary Ro was inspiring. Chasten launched into teacher mode escorting Zachary off the dais. You could see the care in the faces of both Pete and Chasten. What a difference they've made!

I thought Pete also done a good job at representing the LGBT community too, even though, he was running for President of all. He served his country too, more than I can for many, who constantly talk about America, the Constitution, and all the patriot talk ... ask many of them to serve ... they'll do everything they can "not to". I just thought he presents himself well, and I do think he has some good ideas ... even though I'm much more progressive thinking than him. Although he was no choice of mine, as far as voting for him in the primaries, I was looking for candidates a bit more left, since we are so out of balance (this country leans too far right, and it's a phoney corporatist and fascist type right, increasingly, because of money flooding our politics ... I don't even consider Republicans as "conservative" these dayz). But, it's about time that we had a candidate, that was not hiding in the closet and straight up about it, I assume we probably had several gay or bi candidates throughout American political history, but they had alwayz felt they had to stay in the closet about themselves. This will encourage more folks that have something to offer in politics, that are gay, to jump into the arena ... it should be openly equal shot and opportunity for all ... LGBT is part of American culture.