U.S. In Afghanistan: At war With the Truth 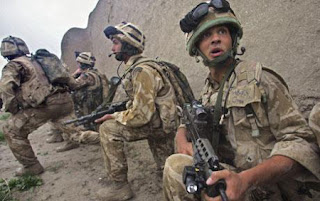 A piece in the Washington Post blows the lid off the disastrous war in Afghanistan that indicates the senior American military and political official seemingly learned nothing from the Vietnam War debacle and knowingly lied to the American public.  To read the piece is disturbing and it underscores that no lessons were learned from Vietnam and underscores the reality that those who ignore history are doomed to repeat it - something that is alarming in the age of Trump when Republicans appear hell bent to repeat the mistakes of Germans who allowed Hitler to rise to power. Much of the blame falls on the George W. Bush administration that began the disaster and then made things worse by invading Iraq. Following administration found themselves stuck with a debacle and no easy exit and, one suspects were mislead by military leaders who never want to admit error.  Read the entire piece.  My heart goes out to those who lost loved ones, friends or suffered injuries in a war that should have perhaps never been started. Here are excerpts:

A confidential trove of government documents obtained by The Washington Post reveals that senior U.S. officials failed to tell the truth about the war in Afghanistan throughout the 18-year campaign, making rosy pronouncements they knew to be false and hiding unmistakable evidence the war had become unwinnable.

The documents were generated by a federal project examining the root failures of the longest armed conflict in U.S. history. They include more than 2,000 pages of previously unpublished notes of interviews with people who played a direct role in the war, from generals and diplomats to aid workers and Afghan officials.

The Post won release of the documents under the Freedom of Information Act after a three-year legal battle.

In the interviews, more than 400 insiders offered unrestrained criticism of what went wrong in Afghanistan and how the United States became mired in nearly two decades of warfare.

With a bluntness rarely expressed in public, the interviews lay bare pent-up complaints, frustrations and confessions, along with second-guessing and backbiting.

“We were devoid of a fundamental understanding of Afghanistan — we didn’t know what we were doing,” Douglas Lute, a three-star Army general who served as the White House’s Afghan war czar during the Bush and Obama administrations, told government interviewers in 2015. He added: “What are we trying to do here? We didn’t have the foggiest notion of what we were undertaking.”

“If the American people knew the magnitude of this dysfunction . . . 2,400 lives lost,” Lute added, blaming the deaths of U.S. military personnel on bureaucratic breakdowns among Congress, the Pentagon and the State Department. “Who will say this was in vain?”

With most speaking on the assumption that their remarks would not become public, U.S. officials acknowledged that their warfighting strategies were fatally flawed and that Washington wasted enormous sums of money trying to remake Afghanistan into a modern nation.

Since 2001, the Defense Department, State Department and U.S. Agency for International Development have spent or appropriated between $934 billion and $978 billion, according to an inflation-adjusted estimate calculated by Neta Crawford, a political science professor and co-director of the Costs of War Project at Brown University.

Those figures do not include money spent by other agencies such as the CIA and the Department of Veterans Affairs, which is responsible for medical care for wounded veterans.

The documents also contradict a long chorus of public statements from U.S. presidents, military commanders and diplomats who assured Americans year after year that they were making progress in Afghanistan and the war was worth fighting.

Several of those interviewed described explicit and sustained efforts by the U.S. government to deliberately mislead the public. They said it was common at military headquarters in Kabul — and at the White House — to distort statistics to make it appear the United States was winning the war when that was not the case.

To augment the Lessons Learned interviews, The Post obtained hundreds of pages of previously classified memos about the Afghan war that were dictated by Defense Secretary Donald H. Rumsfeld between 2001 and 2006.

Dubbed “snowflakes” by Rumsfeld and his staff, the memos are brief instructions or comments that the Pentagon boss dictated to his underlings, often several times a day.

Rumsfeld made a select number of his snowflakes public in 2011, posting them online in conjunction with his memoir, “Known and Unknown.” But most of his snowflake collection — an estimated 59,000 pages — remained secret.

With their forthright descriptions of how the United States became stuck in a faraway war, as well as the government's determination to conceal them from the public, the cache of Lessons Learned interviews broadly resembles the Pentagon Papers, the Defense Department's top-secret history of the Vietnam War.

When they were leaked in 1971, the Pentagon Papers caused a sensation by revealing the government had long misled the public about how the United States came to be embroiled in Vietnam.

The Lessons Learned interviews contain few revelations about military operations. But running throughout are torrents of criticism that refute the official narrative of the war, from its earliest days through the start of the Trump administration.

At the outset, for instance, the U.S. invasion of Afghanistan had a clear, stated objective — to retaliate against al-Qaeda and prevent a repeat of the Sept. 11, 2001, attacks.

Yet the interviews show that as the war dragged on, the goals and mission kept changing and a lack of faith in the U.S. strategy took root inside the Pentagon, the White House and the State Department.

Was al-Qaeda the enemy, or the Taliban? Was Pakistan a friend or an adversary? What about the Islamic State and the bewildering array of foreign jihadists, let alone the warlords on the CIA’s payroll? According to the documents, the U.S. government never settled on an answer.

As a result, in the field, U.S. troops often couldn’t tell friend from foe.

Year after year, U.S. generals have said in public they are making steady progress on the central plank of their strategy: to train a robust Afghan army and national police force that can defend the country without foreign help.

In the Lessons Learned interviews, however, U.S. military trainers described the Afghan security forces as incompetent, unmotivated and rife with deserters. They also accused Afghan commanders of pocketing salaries — paid by U.S. taxpayers — for tens of thousands of “ghost soldiers.”

None expressed confidence that the Afghan army and police could ever fend off, much less defeat, the Taliban on their own. More than 60,000 members of Afghan security forces have been killed, a casualty rate that U.S. commanders have called unsustainable.

On Oct. 11, 2001, a few days after the United States started bombing the Taliban, a reporter asked Bush: “Can you avoid being drawn into a Vietnam-like quagmire in Afghanistan?”

“We learned some very important lessons in Vietnam,” Bush replied confidently. “People often ask me, ‘How long will this last?’ This particular battlefront will last as long as it takes to bring al-Qaeda to justice. It may happen tomorrow, it may happen a month from now, it may take a year or two. But we will prevail.”

In those early days, other U.S. leaders mocked the notion that the nightmare of Vietnam might repeat itself in Afghanistan.

The Vietnam disaster was not only repeated, but in Afghanistan has dragged on even longer. The only positive is that far fewer Americans have died, but many will bear the physical and mental health scars for the rest of their lives.
Posted by Michael-in-Norfolk at Monday, December 09, 2019