John Bolton: A Portrait of GOP Foolishness About Trump 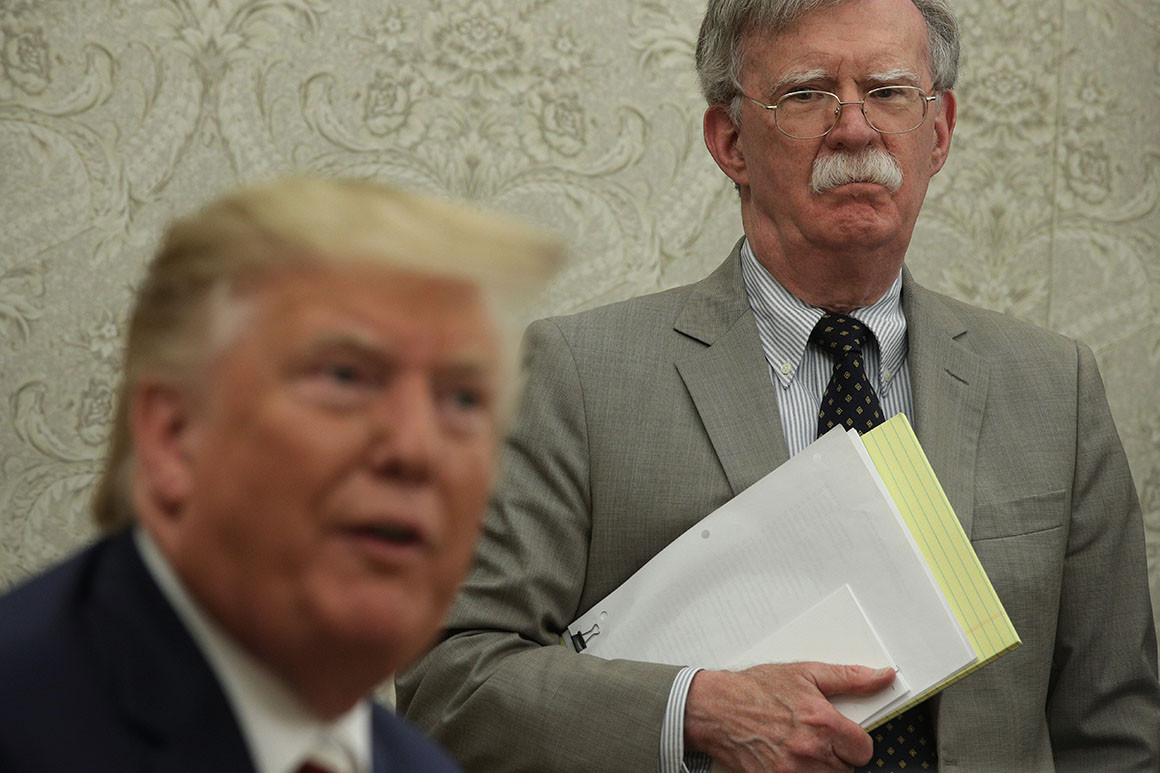 Parallels between German conservatives in the early 1930's who thought they could control Hitler and today's Republicans who viewed Trump as a manageable route to furthering their agenda continue to compound.  Like their German counterparts, Republicans are discovering that their hopes of controlling Trump were mere delusions. Like Hitler, Trump is mentally unstable and views himself as accountable to no one.   In both instances, conservative idiocy has brought severe damage to their respective countries and their institutions.  Former National Security Adviser - of whom I am no fan - is an example of GOP foolishness and the reality that Trump is a dangerous loose canon focused only on himself and his narcissistic delusions of grandeur.  A column in the Washington Post looks at Bolton's belated realization of his own folly.  Here are excerpts:

Donald Trump’s explicitly declared position in the scandal consuming his presidency is that pressuring a foreign power to “investigate” a leading domestic political opponent absolutely falls within his rightfully exercised authority. Trump has said this, and so has his White House counsel, making this the White House’s official political, substantive and legal position.

But this defense is cracking up. That’s because we’re now learning, one after another, that all of the people around him knew that it was grievously wrong — that is, all except for those who were carrying out Trump’s corrupt scheme.

As this becomes more public, Trump’s position will grow increasingly unsustainable — not just as a rhetorical matter but also in terms of whether he’ll be able to keep the support of Senate Republicans, his final line of defense.

The latest domino to fall is John Bolton, Trump’s former national security adviser. The New York Times reports that in July, Bolton grew so alarmed by efforts to pressure Ukraine to launch “investigations” into Joe Biden and his son that he instructed an aide to alert White House lawyers.

That aide is Fiona Hill, a former senior White House adviser on Russia and Europe. Hill testified about this exchange with Bolton to House investigators as part of their impeachment inquiry. Hill told them that Ambassador to the European Union Gordon Sondland, Trump lawyer Rudolph W. Giuliani and acting chief of staff Mick Mulvaney had run what The Post calls a “shadow” campaign to pressure Ukraine to do Trump’s political bidding.

“I am not part of whatever drug deal Sondland and Mulvaney are cooking up,” Bolton reportedly told Hill to tell White House lawyers.

Crucially, this eruption came after a meeting in early July at which Sondland made it clear that the goal of this shadow campaign was to get Ukraine to revive investigations into Burisma, the company on whose board Biden’s son Hunter sat. This confirmed for Bolton that the goal was to leverage Ukraine into acting as Trump’s weapon against Biden — that is, by manufacturing smears designed to debilitate him in the 2020 election.

That made Bolton go “ballistic.” And on another occasion, Bolton described Giuliani, one of the scheme’s ringleaders, as “a hand grenade who’s going to blow everybody up.”

This long-running plot, of course, culminated in Trump’s July 25 call in which he pressured Ukrainian President Volodymyr Zelensky to undertake investigations that would undercut the idea that Russia interfered on Trump’s behalf in 2016, and again help him rig the election in 2020.

Trump’s stance continues to be that this pressure was entirely within his legitimate authority. The White House counsel’s letter, which we now know was largely dictated by Trump, declares that there was “nothing wrong” with the July 25 call . . . .

Ultimately, Hitler ignored his advisers thinking he knew better than everyone else.  Things ultimately ended badly for not only Hitler but also his sycophants and millions of Germans.  Republicans truly need a lesson in history.
Posted by Michael-in-Norfolk at Tuesday, October 15, 2019

Hitler ignored his advisers thinking he knew better than everyone else.

The analogy is becoming impossible to avoid. Trump rages around his White House bunker, denouncing people as traitors, issuing orders and decisions that have no basis except in delusion. Even when electoral defeat closes in on him like the Russians encircling Berlin, he may never accept the reality of what's happening. His world would collapse.