America's Beacon Has Gone Out 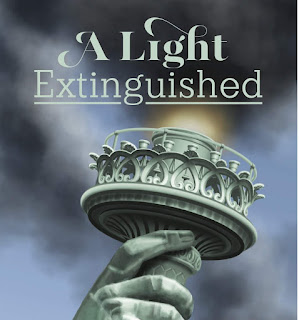 Despite the many ugly aspects of its history - the genocide of Native Americans and slavery and then Jim Crow being some of the ugliest - America has for generations held up in theory democracy and the rule of law and, if you will, the American dream where anyone had a chance to make a success of their lives.  Now, in less than three years, the Trump/Pence regime has extinguished that beacon of promise and, instead replaced it with authoritarianism, a betrayal of long time allies, pandering to outright racists who want to disenfranchise anyone they deem "other" - which likely includes gays - and rule by a malignant narcissist who has loyal to no one and who embodies what every decent parent - Christian or not - should never want the child to be.  No one should be surprised by the damage Trump and his simpering sycophant Mike Pence have wrought.  Trump long ran his real estate empire like a crime boss - a reason New Yorkers despise him so much - and now that cancer has spread to both America's domestic and foreign policy.  An op-ed in the New York Times looks at what has happened in Ukraine which is a microcosm of what is being wrought large by this toxic and dangerous regime.  Here are highlights:

In 2014, Ukraine’s wildly corrupt president, Viktor Yanukovych, fled to Russia after mass protests on the Maidan, Kiev’s central square. During what Ukrainians call the Revolution of Dignity, police snipers killed dozens of demonstrators. In the revolution’s aftermath, a number of young idealists decided to plunge into politics, hoping to reform their troubled country from the inside. One of them was Serhiy Leshchenko, at the time perhaps the country’s most famous investigative journalist.

The American political scientist Francis Fukuyama had encouraged Leshchenko and some of his friends to run for Parliament. He’d met Leshchenko in 2013, when the journalist took part in a three-week summer course run by Fukuyama at Stanford that aims to teach activists from around the world about building democratic institutions. “After the Maidan revolution, I thought that it was particularly important that all these people in civil society actually go into the government,” Fukuyama said.

Many of them did. That October, Leshchenko, a lanky, bearded hipster with a passion for rave culture, became part of a cadre of Western-oriented newcomers elected to Parliament, even as he continued to work as a journalist exposing corruption. This year, after Volodymyr Zelensky won the presidential election, Leshchenko advised him during the transition.

Then Rudy Giuliani began attacking Leshchenko as a conspirator against America.

In 2016, Leshchenko had helped expose the “black ledger,” an accounting book of hundreds of pages found in Yanukovych’s former party headquarters. Among its many entries, it showed $12.7 million in secret payments to Paul Manafort. At the time, Manafort was running Donald Trump’s presidential campaign, but before that, he was one of Yanukovych’s most important advisers.

One of the reasons Manafort is in federal prison is that he failed to disclose or pay taxes on millions of dollars from Ukraine. But if you believe Giuliani, the black ledger was part of a plot to damage Trump.

Last month, in an epic, ranting interview on CNN, he accused Ukraine’s leading anti-corruption organization, the Anti-Corruption Action Center, or AntAC, of developing “all of the dirty information that ended up being a false document that was created in order to incriminate Manafort.”

In Giuliani’s fevered alternative reality, Ukraine’s most stalwart foes of corruption are actually corruption’s embodiment. Deeply compromised figures with vendettas against the activists — particularly the ex-prosecutors Viktor Shokin and Yuriy Lutsenko — are transformed into heroes.

This addled, through-the-looking glass fantasy came to drive American foreign policy in Ukraine. Trump withdrew the American ambassador to the country, Marie Yovanovitch, whom reformers saw as their champion. He withheld military aid that Ukraine desperately needed, while asking Zelensky to do him a “favor” and investigate deranged fictions about Ukrainian interference in American elections, as well as Joe Biden and his son, Hunter.

Given how much Ukraine depends on American support, Giuliani’s smears made it politically impossible for Leshchenko, who left Parliament in August, to continue advising Zelensky. Now, with Ukraine at the center of a world-historical international scandal, he is stupefied to find himself defamed by powerful forces in the United States, once the world’s strongest backer of those fighting for democracy in his country.

If America can be said to have a foreign policy at this debased stage of the Trump administration, it mostly consists of sucking up to strongmen while betraying everyone who ever believed in America’s putative ideals. Trump has given Turkey his blessing to assault the Syrian Kurds, America’s crucial allies against ISIS. In June, he reportedly promised China that he wouldn’t speak out in favor of pro-democracy protesters in Hong Kong, some of whom have been carrying American flags, as long as trade talks progressed.

Here in Ukraine, a country locked in a proxy war with Russia, coping with a deluge of disinformation and propaganda and struggling to transcend a history of corruption, reformers are trying to figure out what it means when the American president sides against them.

[Pro-Western reformers] had seen the United States as a “a perfect democracy functioning very well,” with an admirable system of checks and balances. “And now this image is crumbling and that’s very dangerous.”

[T]here was a time when America at least viewed the projection of democratic values as being in its self-interest. That gave liberals in countries like Ukraine leverage against recalcitrant officials.

“The majority of the reforms, especially on anti-corruption, were passed because there was a very strong demand from civil society, and there was the I.M.F. and the U.S. Embassy pushing it hard,” said Oleksandra Ustinova, a former board member of AntAC who was elected to Parliament this year.

Now that’s all changed. As The New York Times reported, after Trump recalled the U.S. ambassador, Lutsenko gloated to the head of AntAC that he had “eliminated your roof,” using Russian mafia slang for guardian.

“We’ve been exporting our corruption to them, rather than trying to export good governance,” said Fukuyama.

[T]wo Ukrainian-born clients of Giuliani, Lev Parnas and Igor Fruman, had been arrested on charges of campaign finance crimes as they were preparing to leave the United States with one-way tickets.

According to an indictment, the two “sought to advance their personal financial interests and the political interests of at least one Ukrainian government official with whom they were working.” . . . . Sure enough, on Saturday NBC News reported that Lutsenko was the official in the indictment. Yovanovitch might have been referring to Lutsenko when she said, in her Friday congressional testimony, that “individuals who have been named in the press as contacts of Mr. Giuliani may well have believed that their personal financial ambitions were stymied by our anti-corruption policy in Ukraine.”

Federal prosecutors are now investigating whether Giuliani himself broke the law.

Throughout our history, America has committed many sins against democracy around the world, but we used to be on the right side in Ukraine. Not anymore. As one former U.S. diplomat said to me recently, “The beacon has gone out.” We’re with the oligarchs now.

Witnessing what is happening makes one long even for the bad old days of George W. Bush.  Despite his many sins, Bush was not tantamount to a Mafia don running the nation and its foreign policy solely for his own personal financial and political gain.   And yes, I still want to know what Turkish President Erdogan offered Trump in exchange for betraying the Kurds.