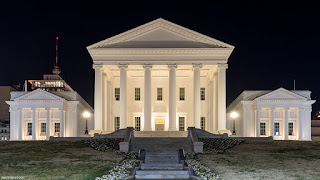 It's Labor Day weekend and the traditional kickoff of the home stretch for political campaigns in Virginia.  As previously noted, with the entire Virginia General Assembly up for re-election, one would think at first blush that the Republican Party of Virginia would have worked diligently to field sane, somewhat mainstream candidates in order to improve its chance of clinging to control of House of Delegates and the Virginia Senate.  Yet at least two of the GOP's candidates are ultra-far right despite their campaign websites' efforts to depict them as moderates.  Indeed, they have both been endorsed by Eagle Forum - a far right group that is anything but mainstream. One of these candidates, Colleen Holcomb is running for the 91st District (i.e., parts of Hampton, Poquoson and York County), continues to be a part of Eagle Forum's Washington D.C., office. The other is Kelly McGinn who is running for the gerrymandered 13th District in the Prince William/Manassas area.

I have followed Eagle Forum for over twenty years.  The organization is very extreme, and is pro-gun, anti-abortion, anti-gay, anti-public education, pro-unregulated home schooling, and would siphon money from public schools to private religious schools, and opposes publicly funded day care and pre-kindergarten programs. Just as disturbing are Eagle Forum's opposition to immigration, support for restrictive voter ID laws, white supremacist overtones, an proposals to restrict the jurisdiction of the federal courts on civil rights issues, and support for a radical definition of "religious freedom" that would allow right wing Christians to exempt themselves from non-discrimination and public accommodation laws.

McGinn is an at home mother (not an issue in and of itself), but previously her work experience is quite troubling.  McGinn was on the staff of former U.S. Senator Sam Brownback – a far right extremist – whose subsequent policies as governor of Kansas slashed education spending and wreaked havoc on Kansas’ economy.  Brownback’s policies were in fact so destructive to Kansas, including its public schools and universities, that Kansas, a deep red state, elected Laura Kelly, a Democrat as governor in 2018.  Virginia does not need an extremist back individual who likely shares Brownback’s damaging views in the Virginia House of Delegates.

As for Holcomb, she espouses Eagle Form's agenda everywhere except on her campaign website which seeks to dupe voters into falsely believing she is a moderate.  Not only is Holcomb tied to Eagle Forum, but she is a registered to lobbyist in Virginia for the anti-gay, anti-reproductive choice, anti-public education Family Foundation, which among other extreme positions supports requiring women to be given a forced ultrasound prior to having an abortion.  The Family Foundation also supports the “Education Improvement Scholarship Tax Credit,” which is essentially a voucher program to divert moneys from public schools.

Back to Holcomb's Eagle Forum ties, Eagle Forum thinks “restricting gun laws devalues our freedoms.” It thinks people on the No Fly List should be allowed to buy guns and teachers should be allowed “to arm themselves while at school.”  Also of note is the fact that two months after failed GOP Senate candidate Todd Akin claimed “in a TV interview …that victims of ‘legitimate rape’ very rarely get pregnant because their bodies prevent them from doing so,” Holcomb campaigned for him.

Eagle Forum supports anti-vaccine extremists.  It is realistic to believe that both McGinn and Holcomb also support this dangerous agenda.

I urge readers in Virginia to carefully research the candidates running in their districts.  Do not allow yourself to be fooled by disingenuous campaign websites and candidates' hidden agendas. . If you live in the 13th District, vote for McGinn's opponent Danica Roem.  If you live in the 91st District, vote for Martha Mugler.  If your House and Senate districts are not competitive, consider making donations to or volunteering for Democrat candidates in competitive districts.  Virginia does not need more far right extremists in the General Assembly.
Posted by Michael-in-Norfolk at Sunday, September 01, 2019