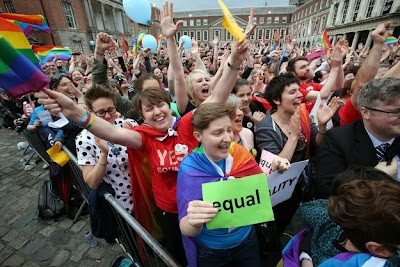 Friday's vote on same sex marriage in Ireland saw more than 60% of voters voting "Yes" to approve same sex marriage.  Less than 38% voted "No" and the opponents appear to have had a majority in only one county.  The results of the referendum are a sharp rebuke to the Roman Catholic Church which seemingly is in a death spiral in terms of its influence and ability to control public opinion.  There are many factors to the Church's decline and the shift in public opinion, but the aftermath of the sex abuse scandal and complicity of the Church hierarchy in it and a populace which is becoming far more educated with independent access to information.  Education and easy access to information and knowledge are religion's true worse enemies.

I do not believe that the rights of any minority should be put to public referendum, as a piece in The Economist correctly notes:

The idea that the majority can legitimise the right of a minority is fundamentally flawed. In the words of Ayn Rand, the Russian-American novelist, “individual rights are not subject to a public vote; a majority has no right to vote away the rights of a minority; the political function of rights is precisely to protect minorities from oppression by majorities.”

There are plenty of examples on how popular votes could have catastrophic impacts in societies if they were to be sought on minority matters. The obvious example is the issue of marriage between white and non-white people in the US.

That said, the vote does have that attraction of making it difficult for lying blowhards like Brian Brown of the National Organization for Marriage to claim that "redefining marriage" was forced upon the public.  Moreover, if Ireland, a one time bastion of Catholicism, can move to support marriage equality, other nations may be more inclined to follow suit.  The New York Times summarized the outcome well:

The opposition, aided by some Catholic bishops who campaigned for No votes, peddled the hollow arguments that have same-sex marriage opponents around the world on a losing streak. They warned that legalizing same-sex marriage would undermine unions between a man and a woman and argued that marriage has an inherently reproductive purpose.

In a statement conceding defeat, the Iona Institute, the main opposition group, said it would continue to affirm “the importance of biological ties and of motherhood and fatherhood.” The absurdity of that statement speaks for itself.

As soon as the referendum is ratified by Parliament, Ireland will join 19 nations that have legalized same-sex marriage — an honor roll that does not include the United States.

Here are highlights from BuzzFeed on the potential wider implications of the historic vote:

When historians write about the global LGBT rights movement, they will probably divide their timeline into “Before Ireland” and “After Ireland.”

Not only did the vote held Friday make Ireland the first country in the world to enact marriage equality by popular vote, but the Yes side crushed the No side by a margin of 25 points. The Yes campaign won with a message that was about far more than the rights of gays and lesbians, asking voters to cast their ballot for “a fairer Ireland” and “because marriage matters.” They succeeded in making it a referendum on what kind of country voters — the vast majority of whom are straight — wanted to live in, and they resoundingly chose one where gay and lesbian couples are part of Irish families just like straight couples are.

“Ireland can be the game changer,” said Mauricio Albarracín, head of the Colombian LGBT rights group Colombia Diversa and a lawyer who has worked on marriage equality litigation scheduled to soon be argued before Colombia’s Constitutional Court. The vote, he said in a phone interview with BuzzFeed News, shows that “the historic tendency is support of marriage equality.”

What’s more, conservative activists agree at least in part, telling BuzzFeed News that this vote shows that their strongest arguments against marriage equality have lost their impact in key parts of the world.

“We’re losing the marriage battles — that’s the truth, especially in Western Europe,” said Ignacio Arsuaga, a Spanish activist who founded a global online campaign platform called CitizenGo. (Its board includes Brian Brown of the United States’s National Organization for Marriage.) “Our arguments are not reaching the majority of society. The majority of society just think in the terms that were promoted by the gay lobby: ‘This is a question of rights …and marriage is a human right.”

The vote was a “powerful clarion call” to decision makers around the world, said Evan Wolfson of the U.S. organization Freedom To Marry, which has been advising marriage equality efforts in several other countries. “The resounding affirmation of the freedom to marry across every demographic [in Ireland] … adds to the global momentum we have all created.”

This may have a special significance in countries like Italy. Now that Ireland has marriage equality, Italy is the only Western European country without any partnership rights for same-sex couples despite multiple court orders calling on parliament to create them.

The fact that Ireland is “considered one of the most Catholic countries in the region, makes this [vote] a very meaningful and historic step for Ireland itself and for the region,” he said. “In the past, when a pop vote was called on the rights of a minority, the minority lost,” he said. “The majority decided the minority’s rights had to be granted, and that was a huge step.”

Friday's vote was historic for many reasons.  The message to the Catholic Church and other anti-gay churches is that the times are changing and either they drop their 13th century "natural law" arguments and embrace modern knowledge and science or run the risk of either becoming extinct themselves or, in the case of the Catholic Church, becoming a black, Africa based church.  Part of me hopes these denominations opt for eventual extinction.
Posted by Michael-in-Norfolk at Sunday, May 24, 2015