Who Really Funds the NRA? Not It's Members 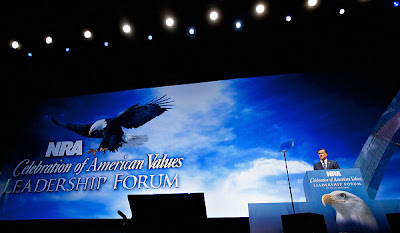 I have long despised the NRA for its disingenuous propaganda pushing for more or less the abolition of all sensible gun control restrictions.  But there's another reason: the organization lies and pretends that it is speaking out for its average members, many of whom want nothing more than to own traditional hunting rifles and/or non-automatic pistols.  However, the reality is that the NRA is increasingly a front organization for gun manufacturers many of whom, you guessed it, manufacture assault weapons and high volume ammunition clips.  So when National Rifle Association spokesman Wayne LaPierre goes on television to claim that the NRA gets its money from its membership in small donations, he's deliberately lying through his teeth.  A research paper shows where the real serious money comes from.  Here are excerpts:

The National Rifle Association (NRA) receives millions of dollars directly from domestic and foreign gun manufacturers and other members of the firearms industry through an organized corporate outreach program according to a new report issued today by the Violence Policy Center (VPC).

Despite the NRA's historical claims that it is not financially allied with the gun industry, including the current disclaimer on its website that it “is not affiliated with any firearm or ammunition manufacturers or with any businesses that deal in guns and ammunition,” NRA "corporate partners" include many of the world's best known gunmakers as well as such companies as Xe, the new name of the now infamous Blackwater Worldwide--known for its abuses in the Iraq war--which alone contributed between $500,000 and $999,999 to the NRA since 2005.

One manufacturer, Beretta, donated one million dollars to the NRA to work to overturn gun control laws in the wake of the 2008 U.S. Supreme Court decision in "District of Columbia v. Heller" (which for the first time ever recognized an individual right to possess a handgun in the home for self-defense).

MidwayUSA sells ammunition, high-capacity ammunition magazines, and other shooting accessories and has contributed between five and 10 million dollars to the NRA via its NRA Round-Up Program (which rounds up customer purchases to the nearest dollar with the difference going to the NRA) and other contributions. One Pittsburgh resident who apparently took part in the NRA’s Round-Up Program through MidwayUSA was concealed carry permit holder George Sodini, who in August 2009 opened fire at an LA Fitness Center in Collier, PA, killing three women and wounding nine others before turning the gun on himself and taking his own life. A copy of the e-mail receipt sent to Sodini from MidwayUSA for his purchase of 9mm and .45 ammunition includes a donation of 74 cents from the mass shooter to the NRA via the Round-Up Program.

The study concludes, "The mutually dependent nature of the National Rifle Association and the gun industry explains the NRA’s unwillingness to compromise on even the most limited controls over firearms or related products (such as restrictions on high-capacity ammunition magazines)....The NRA claims that its positions are driven solely by a concern for the interests of gun owners, never mentioning its own financial stake in protecting the profits of its gun industry patrons.


So when politicians accept NRA money, they not only are little better than paid whores but are also allowing themselves to be played for utter fools.  Are you listening Harry Reid?  The American public needs to open its eyes to who is really speaking for gun manufacturers and not your local neighbor who likes to go hunting from time to time.

Posted by Michael-in-Norfolk at Sunday, December 16, 2012