This blog - and my December column in VEER Magazine (click on the images below to enlarge)  - has made the case that Ken "Kookinelli" Cuccinelli poses a clear and present danger to the rights and freedoms of all Virginians other than perhaps angry white evangelical Christians who want to keep Virginia dominated by white conservative Christian.  Gays, women, blacks, Hispanics, non-Christians and others are all targeted by Kookinelli's toxic policies and his religious extremism.  But in the wake of the massacre of school children in Newtown, Connecticut, last Friday there is another way in which Kookinelli constitutes a danger to Virginians that needs to be called to the attention of Virginia voters he opposes any restrictions on gun ownership.  Don't believe me?  Here is what Kookinelli is disseminating on his campaign website:

The 2nd Amendment is one of those key issues that define the differences between conservatives and liberals. Some (especially those on the left) believe that no one — with the exception of law enforcement and the military — should have the ability to possess firearms. While this seems unrealistic, the left has for years followed through with a "legislative war of attrition" on the 2nd Amendment — seeking to ban incrementally, specific types of firearms, ammunition and sales.
Ken has:
Ken Cuccinelli's support of our rights are not born from politics, but rather from a deeply held belief that Constitutional rights as preserved by our Founding Fathers are sacrosanct — and we should fight on all levels to protect those fundamental rights guaranteed under the US Constitution.


As your next Governor, Ken will continue the fight to protect the 2nd Amendment rights of law abiding citizens and any attempts from liberals in Washington, or in Virginia, to restrict those rights.

There you have it.  Cuccinelli supports the Wild West atmosphere that gun manufacturers, high capacity ammunition clip manufacturers and their minions in the National Rifle Association ("NRA") lobby for on a daily basis.   In keeping with this dangerous mindset, Cuccinelli has opposed the efforts of universities to limit concealed weapons on college and university campuses.   In addition, both in the Virginia General Assembly and as Attorney General Cuccinelli supported the repeal of Virginia's 17 year ban on multiple gun purchases in any given month.   For such advocacy Cuccinelli at the February 2012 Conservative Political Action Conference (CPAC) in D.C., NRA President David Keene presented right-wing Virginia Attorney General Ken Cuccinelli with the NRA’s “Defender of Freedom Award” on behalf of the NRA.  And in 2009 during his campaign for attorney general Cuccinelli was endorsed as the darling of the NRA.

Any Virginian concerned about the proliferation of gun violence needs to understand that Ken Cuccinelli cannot be allowed to win the governorship of Virginia in 2013.  I can think of few things on the Virginia level more frightening than Ken Cuccinelli in the Governor's Mansion. 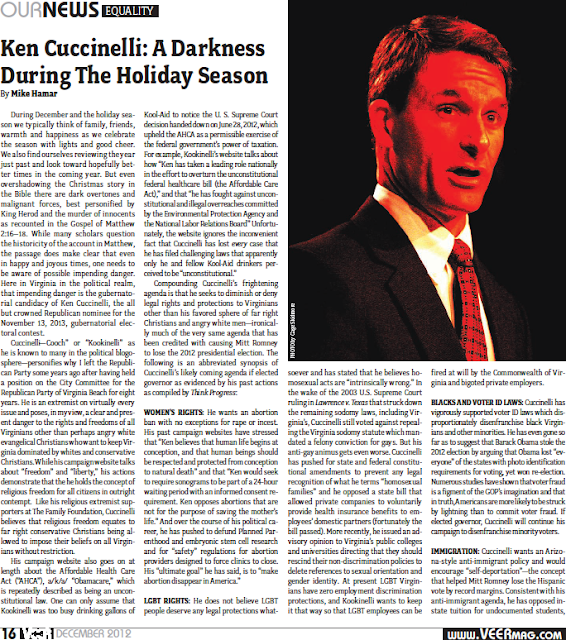 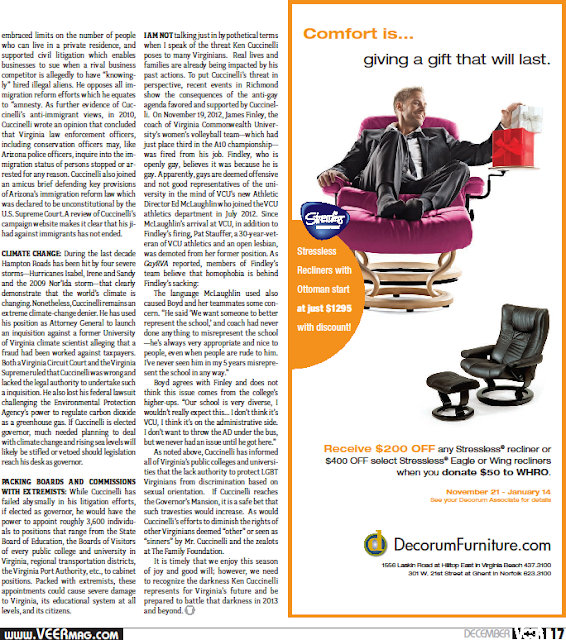 Posted by Michael-in-Norfolk at Monday, December 17, 2012