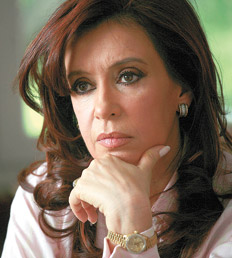 On this 4th of July, America sadly still has a long way to go before it realizes the stated promise of life, liberty and the pursuit of happiness for all citizens.  Religious based bigotry and racial bigotry are alive and well - especially within today's Republican party which pretends to love and support the U.S. Constitution - and both LGBT Americans and other minorities are faced with daily discrimination often as a matter of government policy, especially in reactionary states like Virginia.  As a nation, the USA could really stand to learn somethings from other nations and we need to dump the myth of American exceptionalism (more on that in a future post).  A case in point is Argentina where this week Argentina's president (pictured at right) personally delivered the nation's first identity cards to people who legally switched their genders under a law that sets a global precedent.  We hear so much about equality under the law in America, but it is too often a fiction.  My fellow blogger Andrés Duque looks at this inspiring event in Argentina in his blog Blabbeando.  Here are some highlights followed by a video clip (in Spanish):

Argentinean president Cristina Fernandez de Kirchner celebrated passage of the world's most progressive gender identity law by inviting a number of transgender leaders and personally handing them their new identity cards. The law was adopted by the Argentinean congress in May by a vote of 55-0 and became law last month after getting the president's signature. It allows transgender individuals to change their name and gender on government documents without having to prove that they have undergone gender reassignment surgery or need for court approval as had been the case before. It also grants government health coverage for transgender individuals who want to undergo a gender reassignment surgery.

[T]he Argentinean president also signed a presidential decree yesterday which put an end to a legal loophole that kept same-sex parents who began raising children before the 2010 marriage equality law passed from registering as co-parents of those children. If I understand correctly, the decree gives same-sex parents that weren't covered by the marriage equality law a full year to legally register their children as their own.

"Today is a day of tremendous reparation," the president said at the start of her speech, "today we do not shout for liberation but instead we shout for equality, which is just as important as freedom."

Noting that the average age at which transgender individuals die in Argentina is 32, the president argued that part of it was due to the stress of being repressed and ignored and not having any rights and said this would change that.

"I do not want to use a word that bothers me greatly: Tolerance. No. I do not believe in 'tolerance'. To tolerate is to say I'll allow you to be because I have no other choice", she said, "I want to talk about equality and I want to talk about all of you who will now have the same rights I have enjoyed from the moment I was born and the rights that so many millions of Argentinians have enjoyed from the moment they were born. This is the society we want."


Yes, Argentina has its problems.  But as a society its civil laws are become a standard on how ALL citizens ought to be treated.  It's also ironic that while many America consider themselves to be "good Christians"  Argentina is far out stripping the USA from a legal perspective when it comes to treating others as demanded by the Gospel message.  I for one am very much over the hubris and hypocrisy of the Christianists and their boot licking puppets in the Republican Party.  Here's the video:

I have to call you out on this one. As I've mentioned to you several times, it's not that I often totally disagree with you. Instead, it is a matter of perspective that I think you no longer possess.

On this day of all days, could you not bring yourself to write something positive about the United States of America and its People?

This nation is far from perfect, yet it is a truly exceptional nation. There has never been a nation that compares to it in the history of the world.

But the fact remains, and will always, remain, that without the United States of America and the voluntary sacrifices it has made throughout its relatively short history, the world would now be living under a Nazi tyranny.

What you fail to see is that the United States is not a homogeneous society. We welcome people from all parts of the world into this country every year and always have. That gives the country great benefits. It also causes some problems. Think of the other countries of the world which are also not homogeneous countries and compare how they handle those problems. More often than not brutally and even more and more with open warfare as in the Middle East.

As for religion, look how some other countries of the world handle that problem. Much of Europe has simply abandoned religion. The Middle East and some countries in Africa hack away at the problem with genocide.

The United States of America is not perfect and it never will be. What you fail to see is that if you were able to put every Democrat you would choose into office, the country would still not be perfect.

As I have said to you many times, "How about a little perspective just once in a while?" And on the birthday of the greatest nation in the world in which you are privileged to live openly as a homosexual man and achieve wealth and professional respect how about a kind word about what is right with YOUR country. If you lived in Saudi Arabia, you would have no head. They would have cut it off because of your homosexuality. That's the real perspective.

Sometimes the most patriotic thing one can do is to point out this nation's many flaws. By doing this I'm not saying the nation hasn't done many good things. Only that it continues to fail to live up to its true potential, not to mention the promise of its foundational documents.

You often describe yourself as a "married Christian." As such, you have a host of rights that I as a gay American do not have - and will never have if the so-called conservatives in the GOP have their way. Indeed, I live in a state where I can be fired by an employer at will because I'm gay; where I can be refused housing because I'm gay; where the most significant relationship in my life is not recognized by state constitutional amendment and the federal DOMA act; and where I cannot even get a fair shake in front of most of the state's judges. Are these the attributes of "the greatest nation in the world"? I think not.

The attitude of "America, love it or leave it" has lead this nation into so many fiascoes. Would that there had been more patriotic critics to stop the idiocy. The continued disaster in the Iraq/Afghanistan theater is a case in point. We need to withdraw NOW, yet Obama is too afraid of the "greatest nation on earth" crowd to admit that the USA has been defeated and to place the blame where it belongs: on Bush/Cheney and the GOP.

It's very personal for me. I have a son-in-law headed this fall for his third deployment to Afghanistan. Even thinking about it sickens me. We are throwing lives and billions of dollars down the toilet. For what? Not wanting to admit America was wrong?

Yes, I am proud of some of America's accomplishments, but there's much that is wrong both in the past and in the present. Being a mindless cheerleader does not help this country. Being a patriotic critic is far more constructive.

As always between you and me it is not that we disagree in principle as much as we do in our individual senses of perspective.

Hopefully, you have not gotten the idea that I am a mindless cheerleader for a country that has, by any objective standard, lost its way.

I guess I just want to be reassured that you are not a mindless critic of a country that has not lived up to your expectations.

I can both sympathize and empathize with your concern for your son-in-law. My own son is career military and has been in every Hell Hole the U.S. has been in since 1991. By the grace of God, he has thus far survived. But he has had too many close calls. So it is very personal indeed to me too.

I am glad to hear there are things you are proud of about your country. At least once in a while I think it would increase your credibility if you should find something to celebrate about your country in your blog.

A wise man once said, "Criticism, like rain, should be gentle enough to nourish a man's growth without destroying his roots." Just another way of saying that balance is more often than not a good thing.