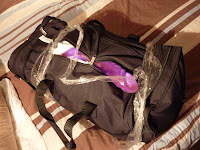 AUGUST 2012 UPDATES: For a further updates on this story, check the following newer posts here and here.  They address the newly filed lawsuit and the thoughts and motivations of the plaintiffs.

UPDATED: Some have asked how the individuals who vandalized the gay couple's bags might have known they were gay. The answer is that they had both their names and shared address on the bag. The main point, however, isn't whether they are gay or straight, but rather why the airline employees did nothing to limit their humiliation and embarrassment. Also, why does the airline seem to simply be blowing the matter off.


During the ongoing Great Recession, one of the brighter lights for the travel industry has been the LGBT travel niche which has remained far more stable than other segments where tourism levels and tourist dollars have plummeted. Many cities are actively courting gay travelers – even Richmond, Virginia, of all places has added an LGBT page to the city’s visitor and convention bureau website and the City of Norfolk recently issued a proclamation in honor of Hampton Roads Pride’s Out in the Park event. American Airlines has recently done a video for the “It Gets Better” project. Indeed, it makes good business sense to court the LGBT market.
*
Yet strangely enough, employees at United/Continental Airlines at Houston Intercontinental Airport sent two gay travelers returning from a luxury trip to Costa Rica (they first contacted me roughly two and a half weeks weeks ago) a very different and disturbing message. One of the pieces of baggage of this young professional couple (who were legally married in Canada nearly four years ago) was deliberately vandalized in a manner to cause the couple maximum embarrassment and humiliation. This message – as explained below – is apparently viewed either as being perfectly fine or certainly no big deal by the powers that be at United/Continental headquarters.
*
The image above shows what this couple’s bag looked like as it circulated around the luggage carousel before an entire plane load of travelers in their conservative home city’s airport. The fact that the bag was deliberately sabotaged is confirmed by the fact that the zippers on the bag continue to be fully functional and the bag can be securely sealed without any difficulty. That’s right. Someone opened the bag, extracted the “toy” and then taped it to the outside of the bag with clear “Continental” tape. Oh, and did I mention that some type of lubricant was smeared on the toy in order to insinuate that it had just been used? Here are brief highlights from the e-mail I received describing the couple’s ordeal (the first paragraph deals with the condition of their luggage in Houston. The second and third, address what they encountered at their home city airport):
*
As we arrived in Houston, Texas (IAH), we shuffled through the line for Immigration, and then picked up our two (2) checked bags as required by law upon our return into the US from a foreign country. With bags in-hand we continued while making our way through a security checkpoint, then approached the area we were to check the bags-back-in, picked up our bags which were in sound and undamaged condition prior to handing them to the attendant who then sent them through the X-ray machine that housed a conveyor belt which sent them to wherever they go from there.
*
After arriving at our home airport while waiting around the baggage carousel, [he] kept looking for our last bag to come out. Then, a bag did in-fact emerge that had a similar appearance to ours; however, it appeared to be wrapped sporadically with CLEAR plastic tape bearing the logo “Continental” and seemed strangely malformed. As it got closer and much to his surprise...and moreover, his HORROR, he saw a sex toy we had packed, had been removed from the middle of the bag and taped right on top of the bag for everyone to see. SO EMBARRASSED, ABSOLUTELY MORTIFIED...just knowing that everyone in sight had already seen it and after looking at their faces that depicted disbelief, some were snickering, others completely astonished, and of course, disgust was ubiquitous. . . . .
*
[He] grabbed our bag . . . . then began quickly striding for the exit while clenching the bag towards his chest, struggling to conceal the open end of the bag while in total discomfiture and despair. [Our friend who was picking us up] is a witness. She saw it. She was completely flabbergasted and appalled that United/Continental Airlines OR ANYONE for that matter would do such a thing to begin with . . .*
And what has United/Continental’s response been to this travesty? They faxed a letter two days after the couple’s 10-day deadline for a response/apology had passed that read: ”they’d look into it.” The demand for a response/apology was e-mailed to United/Continental CEO Jeff Smisek (jeff.smisek@united.com) (312-997-8000) - who claims that he reads every one of his e-mails – and confirmed via a letter. What really scares me is that my partner and I are scheduled to fly to Barcelona on United/Continental in the fall. I’m currently debating whether to look into seeing how much it will cost to cancel our reservation so we can rebook with another airline.
*
The airline industry collected $3.4 BILLION from baggage fees last year alone (up 24% from the previous year) of which approximately $655 MILLION went directly to United/Continental, which makes one wonder where all of those profits may be going exactly? Evidently, at least for United/Continental, not towards employee training programs consistent with maintaining HRC’s Equality Index ratings regarding “Sensitivity Training” and “Positively engaging the external LGBT Community” or “Responsible Citizenship.”
*
How long do Airlines really think they can continue charging ludicrous fees in exchange for tumultuous service that provides for intentional infliction of emotional distress, discrimination, invasion of privacy, etc.? Even after being confronted with their abominable actions, United/Continental has unbelievably refused to act as if they actually give a damn. The all-so-familiar “Please wait…” just became intolerable.
Posted by Michael-in-Norfolk at Wednesday, June 15, 2011

I hope you win your case against the airline.

Found the story via the Daily Mail in the UK.
http://www.dailymail.co.uk/news/article-2195324/Christopher-Bridgeman-Martin-Borger-sue-United-Continental-airlines.html

It's hard to imagine that cretins of this order are in charge of our personal belongings when we check our bags for travel. The act itself was despicable, but the airlines response is even worse. I'll think long and hard before I book with United/Continental ever again. I hope they win the lawsuit and make the airline pay for their personal trauma. Good luck with it.

Looks like the zipper broke, had nothing to do with them being another whiny gay couple who wants special treatment because they're sodomizers.

The next time you travel, put your sex toys in carry on.

The zipper was perfectly fine and totally undamaged. Hence there was no reason not to simply zip the bag closed - unless, of course, someone wanted to humiliate the bags owners.

Oh, and it's nice to see you are apparently a "godly Christian" who despises her fellow man.

Donna, Donna, Donna. How would you feel if your enema bag and copy of 50 Shades of Grey were taped to the outside of your suitcase?

Donna,
you are a horrible excuse for a human being, and not anything Christ-like at all. Karma....

this is so mortifying for the couple. I would like to think that those airline employees would be punished. Taking ANYTHING out of our luggage that is not a prohibited item is a crime isn't it? At least against airline rules? Is this airline saying that it's ok for staff to remove items from our baggage that are not in any way a threat or otherwise prohibited-let alone to do something that is so intentionally meant to cause humiliation and harm?