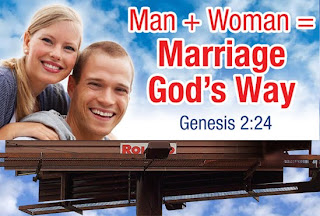 As regular readers know, I view Maggie Gallagher and similar self-enriching hate merchants at the National Organization for Marriage ("NOM") as lower than the sleaziest prostitutes or as my New Orleans belle grandmother might have said, lower than white trash which in her opinion was as low as one could go. Maggie and company continue to rake in generous six figure incomes promoting anti-gay hate while their latest promotion is lauding a billboard campaign in Putnam County, Tennessee which purports to promote "biblical view of marriage between man and woman." The problem, of course, is that a close perusal of the Bible reveals that there is little to support the proposition of marriage as a God ordained sacrament between one man and one woman. Rather, polygamy is the God ordained pattern for marriage according to the Bible, especially the Old Testament. Biblical Polygamy has a complete run down of the male Biblical leaders who believed in anything but one man and one woman. In short, once agin, when Maggie Gallagher's lips are moving, odds are that she's lying. First, here is some of the batshitery from NOM's blog:
*
A grassroots effort to promote the biblical view of "Marriage God's Way" has materialized into the form of two billboards in Putnam County.
*
The billboards, produced by Roland Advertising of Cookeville, Tenn., depict a young man and woman along with the words: "Man + Woman = Marriage God's Way" in reference to Genesis 2:24 from the Bible. The first, located on Tennessee State Highway 111 south of Interstate 40, went up in September. A second billboard went up on I-40, westbound before Exit 290, in October.
*
"There are two basic ways of looking at marriage. Either humans invented marriage or God created it. If marriage is a human arrangement, then a society may alter it at will or do away with it altogether. But if marriage is a divine institution, then only God has the right to say what it is and who has the moral right to be in it."
*
While Genesis 2:24 can be torturously construed to reference one man and one woman, a review of the many, many more Bible passages indicates that either (1) David, Solomon and many other of "God's chosen" apparently did not get the message, (2) marriage was ordained by God to involve multiple wives, or (3) marriage as a joining of one man and only one woman is a human construct. Indeed, based on the Old Testament, the Mormons got it right when it comes to multiple wives. And, if the Bible is inerrant as the the majority of the gay haters claim, then they are stuck with this baggage that is unchangeable according to their own propaganda. Here's a brief run down of the chosen ones of the Old Testament:
*
Abraham: Faithful friend of God and father of the Hebrew nation. "Father of the faithful." 3 Wives - Sarah, Hagar and Keturah. Genesis 16:1; Genesis 25:1
*
David: King of Israel. "After God's own heart." At least 18 wives - Michal, Abigail, Ahinoam of Jezreel, Eglah, Maacah, Abital, Haggith, and Bathsheba, and "10 women/concubines." 2 Samuel
*
Solomon: 1,000 wives - Sidontans, Tyrians, Ammonites and Edomites.
"And he had seven hundred wives, princesses, and three hundred concubines: and his wives turned away his heart." 1 Kings 11:3
*
Gideon: A judge of Israel. Drumah, Shechem. "And Gideon had threescore and ten sons of his body begotten: for he had many wives." Judges 8:30
*
Esau: 3 Wives - Judith, Bashemath and Mahalath, "And Esau was forty years old when he took to wife Judith the daughter of Beeri the Hittite, and Bashemath the daughter of Elon the Hittite:" Genesis 26:34. "Then went Esau unto Ishmael, and took unto the wives which he had Mahalath the daughter of Ishmael Abraham's son, the sister of Nebajoth, to be his wife." Genesis 28:9
*
Moses: Penned the Pentateuch, Torah, Genesis through Deuteronomy (which includes authoring the passages of Genesis chapters 2 through 3, Genesis 2:24, Exodus 21:10, Deuteronomy 21:15, etc.). 2 Wives, Zipporah and the Ethiopian Woman. "And Moses was content to dwell with the man: and he gave Moses Zipporah his daughter." Exodus 2:21. (See also Exodus 18:1-6.) "And Miriam and Aaron spake against Moses because of the Ethiopian woman whom he had married: for he had married an Ethiopian woman." Numbers 12:1
*
Jacob: Father of the twelve patriarchs of the tribes of Israel. "The prince of God." 4 Wives - Leah, Rachel, Bilhah and Zilpah
*
There are more examples, but you get the drift. I'd like to hear Miss Maggie try to disingenuously explain all this away. Of course, she can't and won't even try, probably complaining about how "mean" gays are. The truth, of course, is that "marriage" is not God ordained, but rather a human invention.
Posted by Michael-in-Norfolk at Tuesday, December 28, 2010