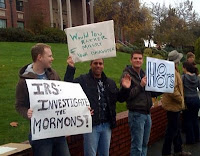 Californians Against Hate have set up a new blog, Mormongate.com, which is focusing on the activities of the Mormon Church to (1) establish National Organization for Marriage as a largely Mormon front organization, and (2) hide the true magnitude of the Mormon Church's efforts to get Proposition 8 on the ballot and the true amount of the Mormon Church's political spending. I truly hope that more investigation into these activities will take place and that there will be renewed calls to have the IRS investigate revoking tax-exempt status for the Mormon Church. The facts reveal that the Mormon Church leadership has nothing but contempt for the religious freedoms of others and that the insidious under the radar efforts extend even to states where there are few Mormons. Here are some highlights:
*
The Church of Jesus Christ of Latter-day Saints (Mormon Church) has been leading the national crusade against same-sex marriage since President Gordon B. Hinckley issued such a proclamation in 1988. The Church showed just how effective it could be beginning in Hawaii in the mid-nineties all the way through to California’s Proposition 8 in 2008. They were involved to some degree with all 30 state elections outlawing same-sex marriage.
*
The purpose of Mormongate.com is to tell the real truth about the Mormon Church’s massive involvement and cover-up of this issue. Nearly all of their activities are intended to be highly secretive. This strategy has served them well over the past 20 years; however, we have recently received documentation of just how they operate.
*
The Mormon Church appears to have created the National Organization for Marriage (NOM) in the summer of 2007 to qualify California’s Proposition 8 for the November 2008 ballot. They set it up as a Mormon front group, exactly as they did with a very similar organization called Hawaii’s Future Today (HFT) in that state in 1995. HFT was established to pass a constitutional amendment in Hawaii to ban same-sex marriage. Sound familiar? They have now expanded NOM into seven more states, specifically to fight same-sex marriage in those states.
*
If the Mormon Church wants to operate a political operation they should have to do so without the benefit of tax-exempt status. Write your representatives in Congress and demand that they work to have the IRS investigate the Mormon Church.
Posted by Michael-in-Norfolk at Saturday, March 21, 2009