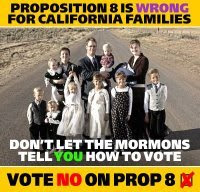 While it is within the legal rights to do so, it is nonetheless disturbing that the Mormons, a/k/a The Church of Jesus Christ of the Latter Day Saints, are basically bankrolling the anti-gay constitutional amendments in both California and Arizona. By some reports, 77% of all funds have come from Mormons who are (i) seeking to impose their religious view of marriage on all citizens of those states and (ii) apparently trying to endear themselves to the Christianists who tend to view the Mormons as something other than fully Christian. I guess the theory is that if the sufficiently bash and disparage gays, then the Christianists will allow them to be full members of the Christian Taliban and increasingly deranged GOP base. Here are some highlights from The Advocate's coverage of the Mormon efforts to deprive gays of the right to marry in California:
*
The Church of Jesus Christ of Latter-Day Saints has mobilized followers to give an estimated 77% of donations to support California's proposed marriage ban. Californians Against Hate released figures Tuesday showing that $17.67 million was contributed by 59,000 Mormon families since August to groups like Yes on 8. Contributions in support of Prop. 8 total $22.88 million. Additionally, the group reports that Mormons have contributed $6.9 million to pass a a similar law, Proposition 102, in Arizona.
*
"It is a staggering amount of money and an even more staggering percentage of the overall campaign receipts," Fred Karger of Californians Against Hate said in a press release. "The Mormon Church, based in Salt Lake City, Utah, has hijacked the campaigns in both California and Arizona, where voters face constitutional amendments to end same-sex marriage."
*
"For whatever reason, they're trying to get some respect from other religions," he told The Advocate Tuesday. "They've always been looked down upon by the Christians, the Catholics, and evangelicals." Success with the marriage amendment would give the church credibility, Karger said.
*
The Latter-day Saints Church says it has approximately 770,000 members in California, accounting for about 2% of the state's population. Senior church elders broadcast a call to Mormons October 8 for increased volunteer efforts and donations for the marriage fight. The hour-long message went out to churches in Utah, Hawaii, and Idaho as well as California. Members of the Quorum of Twelve Apostles, the second-highest church governing body, explained their plan to pass the ballot initiative.
Posted by Michael-in-Norfolk at Friday, October 24, 2008