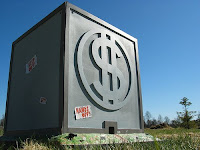 I have long held that a great many of the "pro-family" organizations have as their main agenda making a nice comfortable living for their founders and "ex-gay" for pay employees. True, there is also the political agenda of keeping alive the choice myth, but the real goal is money. Emerging facts about the Riverside, California-based California Family Council which claims to have a mission to protect and foster Judeo-Christian principles in California’s laws, for the benefit of its families is a case in point. These charlatans continue to prey on their sheep-like contributors to finance their comfortable life style and no doubt laugh all the way to the bank. Yet another example of the professional "Christians" being utter dirt bags in fact. I have often said that if I wanted to make great money without really working I would set up a "ministry." What has held me back is that I'm not a liar nor am I inherently dishonest. It is also of interest that Ron Prentice, head of the California Family Council, was formerly with Focus on the Family, Daddy Dobson's money machine. Here are some highlights from Justin McLachlan.com:
*
The money was supposed to go to support the California Family Council's charitable mission, instead, most of it went into the pockets of the organization's employees. Since 2003, the public has given the Riverside, Calif.-based California Family Council (CFC) nearly $3 million to support charitable work that the organizations says "protects and fosters judeo-Christian principles in California's laws."
*
But, according to its federal tax returns, little more than $500,000 of that money has gone to "program services," or expenses directly related to that charitable work. In contrast, the CFC's top two employees, including its founder and executive director, Ron Prentice, were paid a total of $1.1 million over four years. The CFC's other employees earned a total of $900,000 in compensation -- bringing the total spent on employees at the Council to about $2 million since it began in 2003.
*
In its first two years, the CFC reported spending nothing on program services, despite receiving approximately $1.6 million in donations. "The ratios are terribly wacky," Dr. William Crookston, an expert in business management and nonprofit organizations at USC, said in an email. He noted that the six figure salaries that Mr. Prentice and Mr. Henderson draw are high for the amount of money the CFC has received, particularly for an organization that's just a few years old.
*
Mr. Prentice, a former marriage and family therapist from San Diego, is also president of California Renewal, a nonprofit that controls Protectmarriage.com. Protectmarriage.com is a ballot measure committee supporting proposition 8, a constitutional amendment that would take away the right of gay and lesbian couples to marry in California.
Posted by Michael-in-Norfolk at Wednesday, September 10, 2008